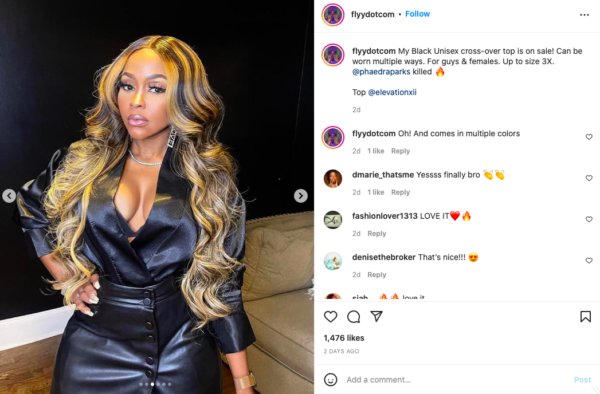 In the Instagram post, Parks wore all black, including a long-sleeved blouse and button-up skirt, while modeling clothes for fashion designer Mariyon from his clothing brand ELEVATION XII.

When one of the images from Mariyon’s upload was reposted on The Peach Report Daily, an entertainment blogging site, fans immediately flooded the comment section.

The comments were made up of many proclaiming who the attorney was more like, her former castmate Cynthia Bailey from “Real Housewives of Atlanta” or “Married to Medicine” star Quad Webb. One person went so far as to claim that Parks looked like a combination of both women.

“For a moment I thought it was Quad.”

‘Chile I didn’t know who this was. Lol I was so confused. At first I thought it was Quad.”

“My thoughts went from Cynthia to Quad to who is this?”

“Girl, why did I think this was Cynthia.”

In addition to the comparative comments, others raised how unrecognizable parks looked. One wrote, “Harpo, who’s the woman?!” Another said, “That’s not Phaedra.”

This isn’t the first time Parks has been mistaken for another celebrity. In December, fans mistook the former reality star for singer Mary J. Blige. Despite the comparison, no specific reason was given by those who claimed to see similarities between Parks and Blige.

Parks, who was gearing up for the holidays by uploading Christmas-themed posts, wore a semi-sheer dress with cut-out earrings and white heels in the December 20 upload, leading some viewers to liken her to Blige. To top it off, she wrote three emojis with a white heart to accompany the image.

More news from our partners:

‘Stay out of business with married people’: Ayesha Curry shuts down Heckler, accusing her and Stephen Curry of having an open relationship