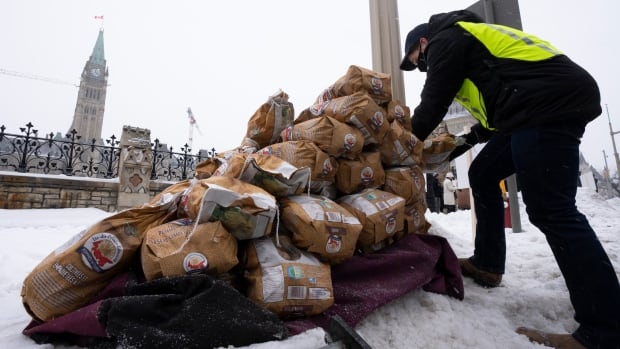 The United States Department of Agriculture’s Animal and Plant Health Inspection Service (APHIS) amended its requirements for the importation of table potatoes from PEI on Friday.

The news comes following an announcement from the Canadian Food Inspection Agency last week indicating the agency would be lifting its ban on exporting PEI table or eating potatoes — but not seed or processing potatoes — with conditions.

“It’s good news for our table stock potatoes to see the market open for the mainland in the US,” Bibeau said.

“The potato industry is so important, it’s part of your identity … when we can see [potatoes] leaving the Island and going to the US it’s going to be great.”

Island farmers have said an estimated 300 million pounds of potatoes would have to be destroyed this winter.

Friday’s announcement also means bags shipped to Puerto Rico will no longer have to be labeled, Bibeau said, and shipments are no longer limited in size.

“We can now ship these potatoes in totes, or in bulk as well so it’s good news for … farmers on the Island.”

Seed potato exports still aren’t expected to resume until 2023. Bibeau said the investigation is ongoing and Ottawa will keep working with seed producers to see how they can be supported in the interim.

“Seed potatoes are meant to be planted, so the risk for them is greater — so this is why we need to complete the investigation. We will keep working closely, see how we can support them in terms of the loss of last year and also see what opportunities they can have and how we can support you … we will work together to find a clear path forward.”

The CFIA said last week the US would require PEI potatoes, as well as the seed potatoes used to produce them, “originate from fields not known to be infested with potato wart or associated with known infestations.”

Other conditions state that PEI potatoes must be:

Shipments of fresh potatoes to the United States and its territory of Puerto Rico, and eventually the rest of Canada, were suspended following the discovery of potato wart in two Island fields in October.

The CFIA halted shipments of seed and table-stock potatoes to the US in November, prompted by a US threat that it would act if Canada did not. Canadian officials were concerned that an American action would be more difficult to reverse.

Wart is a fungus that disfigures potatoes so that they are unmarketable and reduces yields, but poses no health risk to humans.

We’ll believe it all and see it all when the loads start going south and they get to the border, to the destination where people are looking for them.—John Visser

John Visser, chair of the PEI Potato Board, said farmers are relieved they can resume shipping to the US He said orders are already starting to come in.

“I guess this just goes to show that the science did work all along,” he said.

“Hopefully there’ll be no surprises. We’ll believe it all and see it all when the loads start going south and they get to the border, to the destination where people are looking for them.”

The PEI Potato Board estimates trade with the US would have been $120 million this season.

Some happy news to bring us into the weekend- PEI Potatoes can once again be shipped to our clients and consumers in the US! 🎉 pic.twitter.com/npTOhc5Yg5