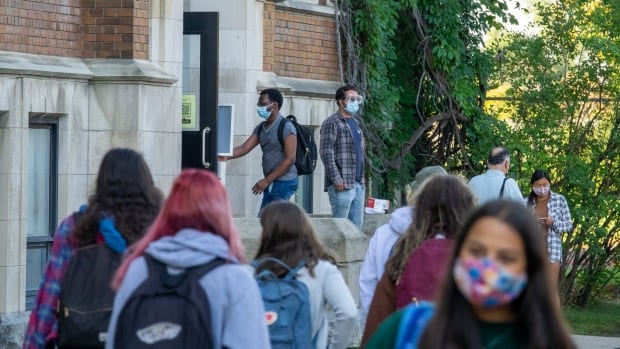 Ottawa’s largest school board is moving to again require students and staff to wear masks amid a sixth wave of COVID-19, after the measure was dropped by the provincial government on March 21.

Eight trustees with the Ottawa-Carleton District School Board (OCDSB) voted in favor of a motion by River/Gloucester-Southgate trustee Mark Fisher, while one trustee opposed the move and three abstained.

“We can’t pick and choose when safety is important,” Fisher said in defending his motion on Tuesday night.

The vote came three weeks after the province lifted most mask mandates, but amid a resurgence of COVID-19 in Ottawa.

The city has recently set records for the amount of coronavirus observed in local wastewater. In a statement to CBC News earlier this week, Ottawa Public Health said it strongly recommends people mask up indoors and supports measures to increase mask use.

“I think the situation in Ottawa over the last couple of weeks has changed considerably,” Fisher said.

The school board, which represents over 70,000 elementary and high school students, had 113 COVID-19 cases among staff and students as of Tuesday, according to Brett Reynolds, the board’s associate director of education.

Several trustees spoke of classes or schools being closed in their zones.

BREAKING: Trustees with the Ottawa-Carleton District School Board, the city’s largest school board, have just voted in favor of reinstating masks in the district’s schools. #ontario #ottawa #ottnews pic.twitter.com/bJsIwNoJ0s

CHEO, Eastern Ontario’s children’s hospital in Ottawa, had five patients with COVID-19 as of late Monday, all of whom were admitted for reasons other than COVID-19.

Barrhaven/Knoxdale-Merivale trustee Donna Blackburn voted against Fisher’s motion and said masking isn’t required in many other parts of society.

“I refuse to give people a false sense of security,” she said of imposing masks in schools.

“I think putting this in place will cause more people to wear mask,” countered Rideau-Vanier/Capital trustee Lyra Evans, who voted in favor of the motion.

Exactly how quickly the move will take effect is unclear, as Fisher’s motion did not include a start date.

A spokesperson for the board said after the meeting that staff are developing an implementation plan and “will provide additional clarification shortly.”

Tuesday night’s meeting marked the second time in recent weeks that masking was front and center at an OCDSB meeting.

Before the province lifted mask mandates on March 21, trustees considered extending mandatory masking until April 8 for kindergarten to Grade 12 but ultimately didn’t have the votes to defy the province.

The March 14 motion failed to pass in a tie vote, with six opposed and six in favour.

Premier Doug Ford has spoken out against school boards wishing to go their own way on masking.

“The chief medical officer is the expert,” Ford said last month, adding that Dr. Kieran Moore did his “due diligence” in ending the mask mandate.

“Follow the direction of the chief medical officer, plain and simple. That’s what we expect and hopefully they do that.”