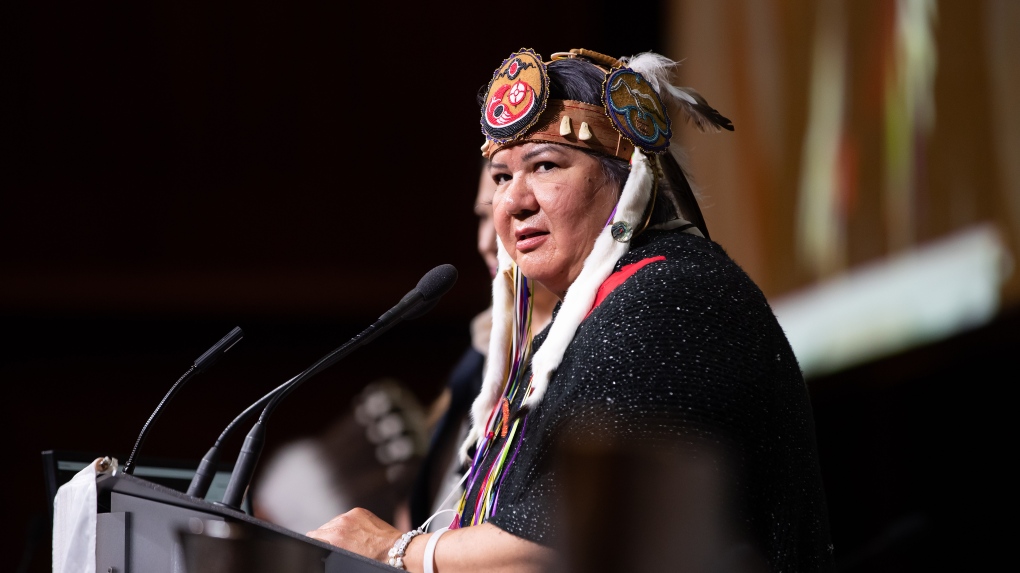 Thousands of delegates gathered for the annual meeting of the Assembly of First Nations on Tuesday to discuss the Pope’s visit, Indigenous rights, housing and other priorities, but those issues were overshadowed by allegations of corruption and infighting over the leadership of National Chief RoseAnne Archibald.

Dressed in Indigenous regalia, Archibald strode into the Assembly of First Nations rally in Vancouver in front of a group of chanting supporters.

Just a day earlier, Archibald said she had been “scratched” off the agenda after she was suspended by the executive committee on June 17 while an investigation was underway into four complaints made against her by her staff.

“I am your representative. I am your servant. I only exist because you all put me in this position, so an attack on me is an attack on you,” she told more than 2,000 delegates. “It is your authority to determine what happens to the national chief. You elected me, not the regional chiefs. You determine what discipline I must face.”

Archibald alleges she was suspended for trying to investigate corruption within the assembly and called for a forensic audit of the organization over the past eight years.

She said it came after “decades” of calls for reform within the organisation.

“When you support me, you will fight corruption,” Archibald said.

Ahead of his address, the Assembly of First Nations executive urged delegates in a statement not to allow human resources complaints involving Archibald “to overshadow the real and ongoing work that is required on behalf of the peoples. First Nations”.

“The committee further calls on the National Chief to immediately cease all actions and statements that constitute serious breaches of the confidentiality and privacy of AFN employees, service providers and others, including making broad allegations of misconduct,” the statement read.

The executive believes these actions are harmful, illegal and improper, according to the statement.

Archibald said her suspension is a violation of the assembly’s charter and a way to intimidate, punish and silence her over her allegations of possible misuse of public funds by the assembly.

“Obviously I am appealing to our friends for an independent audit and investigation of the AFN and asking the chiefs and grassroots people to speak to their chiefs to ensure that a forensic audit takes place as well as ‘an independent investigation into corruption and toxicity at the AFN,’ she said before entering the assembly on Tuesday.

Chief Paul Prosper, AFN Regional Chief for Nova Scotia and Newfoundland, called on the chiefs and their proxies in attendance to validate the executive’s decision to allow Archibald’s temporary suspension to continue. until the end of the investigation.

“No organization is perfect. We all face our own challenges and yes, as an organization we can improve and we must improve.”

Archibald said in her address that she wanted audits in two areas: staff payments and contracts.

“Millions of dollars have been made in payouts to staff,” she said. “That’s what the forensic audit will show you. You’ll see how the money meant for you and your communities went into someone else’s pocket.”

Musqueam Chief Wayne Sparrow, in whose territory the meeting is being held, asked in his opening statement that all attendees be respectful.

“When I arrived, I brought some of the elders. There were signs that were not appropriate in our territory. No matter what your opinion, seeing words like that is very hurtful to our elders and our leadership” , did he declare.

A draft resolution submitted to the assembly calls for Archibald to be removed from office and for a new election to be held because she did not obtain the required 60% of the votes cast when she was elected on last year.

Archibald could be ousted if the motion passes, Prosper said in an interview.

“That’s the great thing about these assemblies. It gives an opportunity for people to come together and discuss these very important issues so that they can be dealt with and then we could move on to the more important issues like housing , education, the United Nations Declaration on the Rights of Indigenous Peoples, these issues are the real issues that matter within our communities,” he said.

Chief Wendy Jocko of the Algonquins of Pikwakanagan First Nation called on the assembly to immediately end Archibald’s “unfounded and unlawful suspension.”

“We must respond to this with a full and independent investigation of the NPC Secretariat and Division Chiefs. Someone must be held accountable for the treatment of our duly elected National Chief,” she said Tuesday after Archibald’s speech.

The theme of the assembly meeting is ‘walking the path of healing’ and comes a day after the AFN announced a $20 billion settlement to compensate First Nations children and their families for harm caused by the chronic underfunding of child welfare on reserves.

AFN Regional Chief Cindy Woodhouse, the chief child protection agreement negotiator for the assembly, said the leadership issue does not affect her work.

“First Nations sometimes go through turbulent times, but I know we’ve been through so much historically and I think this work is so important that it will continue to move forward.”


With files from Sarah Ritchie.