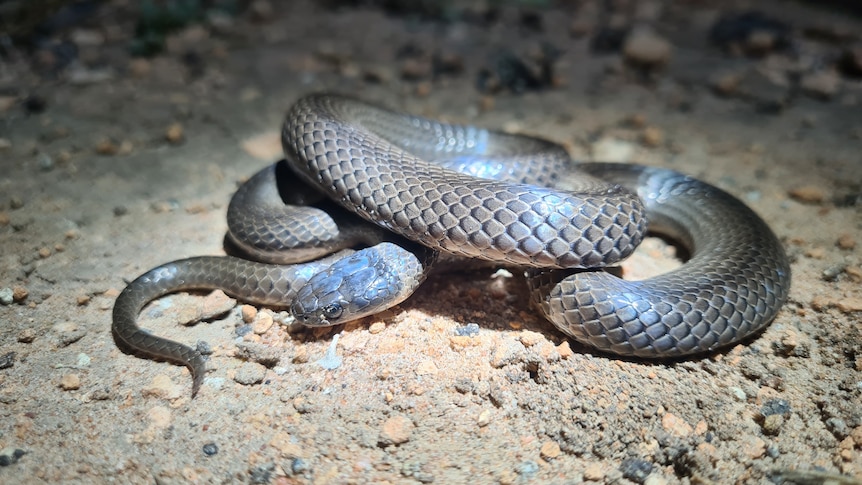 The words “cute” and “snake” do not often go together, but that’s exactly how the frog-eating gray snake is being described.

The venomous snake has only been seen a handful of times in the past 65 years.

But that has changed thanks to Charles Sturt University honors student Talia Schlen.

Scouring the clay landscape on the banks of the Murrumbidgee River in the New South Wales Riverina at night with a torch fitted to her head, Ms Schlen came across the hard-to-spot reptile.

“It was super exciting. I found 30 individuals,” she said.

“One night was a magic night. This is the thing about snakes, you’ll find maybe one every so often, but then sometimes, and we don’t know why, you’ll see an unusual amount.

“I was very lucky this one night, I found nine in like a kilometer, which is cute.

“The snakes give live birth and I found some babies freshly popped out, ready to go looking for baby frogs.”

Ms Schlen spent five weeks searching for the elusive snake, measuring them and compiling information for a species distribution list, similar to a map you would see in a bird watcher’s guide.

“It is big because we found them in areas that we hadn’t seen before,” she said.

“At this stage it looks like I’ve found them in at least six different locations from where they’d been found previously,” she said.

The gray snake is listed as endangered in Queensland and by the International Union for Conservation of Nature.

Ms Schlen said the distribution list would be used to advocate for more research funding and protection for the animal.

“Often there’s not enough money to do the science we want, but by having the snake listed as endangered, hopefully it’ll improve it in research priorities,” she said.

Ms Schlen said although no-one had done extensive research in the region before, she was optimistic the rehabilitation of the Murrumbidgee flood plains was helping the elusive population to prosper.

“I’m hoping that if the reason they’ve popped up again in the lower Murrumbidgee is because it’s a flood-plain rehabilitation, it’ll paint a bigger, better picture,” she said.

“It’s not hard, but it does take collaboration.

“I don’t know if there are any more, but I’m certainly very keen to find out.”