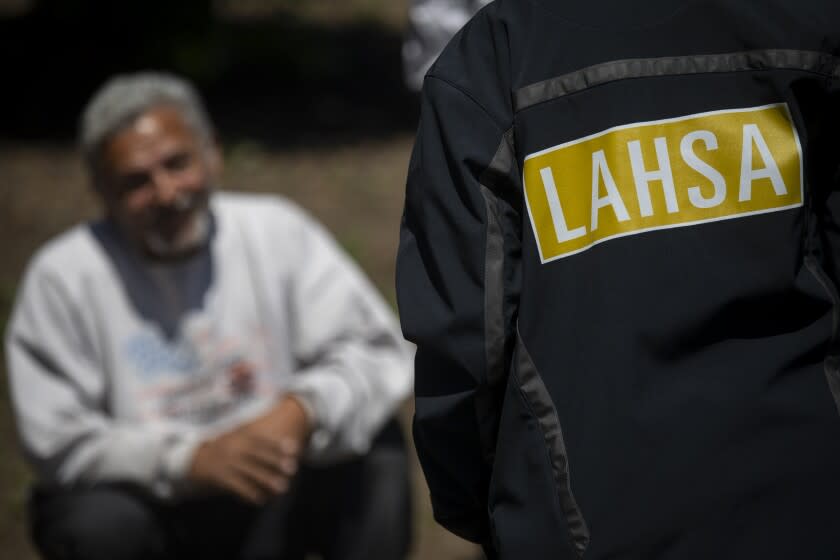 The report, broadcast Monday by KCBS-TV Channel 2, showed LAHSA workers throwing crates of food into a dumpster. The news station said it had followed homeless service workers for months and used hidden cameras.

According to KCBS, many were seen at the end of their working days folding empty boxes after presumably distributing meals.

Some workers were seen having breakfast after picking up lunch boxes before driving, stopping twice to deliver meals, then walking through a park for an hour, the station reported. Near the end of this team’s shift, the news station captured the workers distributing the food at an encampment in Panorama City.

Other teams were also seen having breakfast after collecting lunch boxes. A team was seen stopping at Target, Starbucks and McDonald’s after breakfast before driving past encampments without handing out food.

An employee of this team was seen throwing a crate of food into a dumpster behind the LAHSA office in Panorama City late in the day, according to the report.

Another team was captured pulling two boxes of food out of their car and dumping them in a dumpster behind the agency’s office, KCBS reported.

“I was in disbelief watching the recent report by David Goldstein of KCBS describing the Los Angeles Homeless Services Authority … staff throwing away edible meals intended for homeless people,” Feuer said in a letter sent to the president on Tuesday. of LAHSA’s board of directors, Jacqueline Wagoner and interim. co-executive directors Kristina Dixon and Molly Rysman.

Feuer called the “apparent waste of taxpayer-funded resources…unexplainable and completely unacceptable” and urged LAHSA to launch an immediate investigation into the actions of the employees. Among the questions he wanted answered were:

The city’s attorney also said the report raised “troubling questions” about whether the agency’s outreach workers are devoting their workdays to their primary job of “getting homeless people out.” off the streets and to access appropriate housing and services”.

Feuer also asked LAHSA what steps it will take to ensure its outreach workers meet their goals, whether the agency has procedures in place to monitor outreach workers, whether those employees are required to complete on-board vehicles when using agency vehicles and whether these logs are audited. by supervisors.

In response to the KCBS report, LAHSA said Tuesday evening that its outreach workers have been distributing county-funded meals for more than two years as part of their “life-saving response to COVID-19” and that the health of people they they serve is of utmost importance.

“The lunches that LAHSA Outreach Crews provide to our unsheltered neighbors are perishable,” the statement said. “While an outreach team will take enough meals to serve everyone in their assigned area, not everyone they encounter will accept them.”

Surplus meals may be donated to shelters or other service providers, but are otherwise discarded “to protect the health and safety of the people they serve,” LAHSA said.

The agency pushed back against allegations that its employees were wasting taxpayers’ money, saying they were entitled to breaks and lunch under labor laws. LAHSA said it does not tell its employees how to take breaks or eat lunch.

Because outreach work requires a hands-on approach, LAHSA said, workers sometimes go to a store to buy items for homeless people that help them stay safe or could help them find housing or shelter. .

The agency said its teams are most effective when they have time to build relationships and build trust with the people they serve, which can include providing items such as food and water or going to a doctor’s appointment.

“So the engagement may be different depending on who the team hired,” the agency said in its statement. “Ultimately, the customer trusts the outreach team and works with them to resolve their homelessness issue.”

The recent allegations against LAHSA come after the LA County Board of Supervisors voted this month to create a new office or department that would coordinate the county’s response to the area’s homelessness crisis.

The new entity would have authority over various agencies — including the county’s health services, social services and mental health departments — and report directly to the board of oversight.

The measure passed by a 3-2 vote and called on the county’s chief executive to develop recommendations on the specific powers and structure of the new office.

The creation of the new entity was one of seven recommendations presented to council by a special committee set up to examine ways to improve the county’s response to homelessness. Among them were several proposals to improve LAHSA’s effectiveness and clarify its role.

Created in 1993, LAHSA was given limited powers and an even more limited mission to keep the city and county from bickering over federal dollars for housing and homeless services. Its failure to meet public expectations—coupled with the county’s skyrocketing homeless population—led to a growing consensus that the agency needed to be restructured.

These efforts began last July, when the Board of Overseers established the Blue Ribbon Commission on Homelessness, an eight-member committee to conduct in-depth study and analysis of the governance and operations of LAHSA and its provide recommendations for change and improve agency effectiveness.

This story originally appeared in the Los Angeles Times.