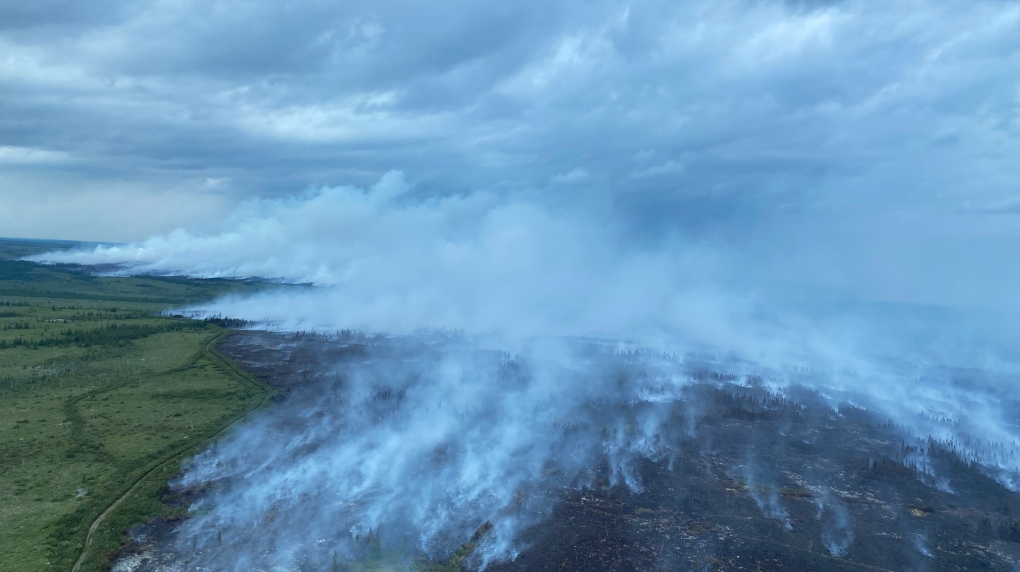 The deputy mayor of a southern Newfoundland town said Monday his community was starving for food as it remained cut off from the rest of the island due to the province’s worst wildfires in more than 60 years.

Roy Drake said the three grocery stores in Harbor Breton, Newfoundland, will likely run out of food within a day or two. Drake said he has one of those stores – the smallest of the three in the town of around 1,600 people – and already there isn’t a jug of milk or a loaf of bread left on any of his shelves. .

“Things are starting to get stressful for most residents,” Drake said in a phone interview from City Hall. “We have to bring food in a day or two to help us. Not just for Harbor Breton, but for the whole region.

The province said in a news release late Monday that it had begun helicoptering essential goods to stranded communities.

Over the past two weeks, wildfires have forced authorities to intermittently close a 200-kilometre-long remote road that connects the main highway through Newfoundland to the island’s Connaigre Peninsula, home to the towns of Harbor Breton, Hermitage and Conne Rivière. The last time the road was open was last Thursday morning, according to the Forest Department.

The province has declared a state of emergency extending from the Connaigre Peninsula up the highway to the towns of Bishop’s Falls, Grand Falls-Windsor and Botwood, largely due to smoke and air quality. Officials said Saturday the fires were burning in a remote area and the flames posed no risk to homes or residents.

On Monday afternoon, the Forest Department estimated that the two main fires in the region together covered more than 160 square kilometers. Typically, wildfires in Newfoundland and Labrador do not exceed five square kilometers, Jeff Motty, the province’s forest fire department officer, said in an interview, adding that the two fires were out of control.

The blaze that started in an area called Paradise Lake was less than 25 miles from Grand Falls-Windsor, and crews were working Monday afternoon to build a firebreak that would keep the flames from getting closer to town, Motty said. It was expected over the weekend that the two fires would merge, but winds on Sunday were not as strong as expected and the air was wetter than expected, he said.

With some rain expected on Tuesday, Motty said there was less fear of the fires joining forces. “But still huge fires out there in the landscape,” Motty said.

Quebec sent firefighters and planes to help fight the flames. “It’s not very often that we bring in such expensive resources,” Motty said, noting he was pleased provincial officials had responded to the request for help.

In a video posted to social media Saturday night, Newfoundland and Labrador Premier Andrew Furey described one of the fires as the largest the province has seen since 1961.

The Canadian Red Cross has set up an emergency shelter for people stranded north of the fires in central Newfoundland. On Monday, Grand Falls-Windsor officials offered twice-daily shuttle buses to nearby Deer Lake emergency shelters for residents wanting to get away from the smoke.

For those stranded south of the Connaigre Peninsula fires, the provincial Department of Transportation has hired a ferry to bring supplies to stranded communities and to help people get away.

The ferry was due to arrive on Tuesday. But in the government press release that said helicopters would bring in supplies, he also said the Sound of Islay ferry, which was supposed to do the job, has been delayed by mechanical problems and is in St. John’s for work. repairs.

He said an update will be provided when the repairs are complete.

David Neil, meteorologist in charge of warning preparedness for Environment and Climate Change Canada, said the fires started on July 24 with a lightning strike in the middle of an abnormally hot and dry summer.

“It’s a very unique situation,” he said, though he was hesitant to attribute it directly to the province’s changing climate.

Neil said there was about 10 millimeters of rain forecast for the area on Tuesday. “It’s not a lot of rain,” he admitted. “But at the very least, it should help people trying to contain the fire.”


This report from The Canadian Press was first published on August 8, 2022.