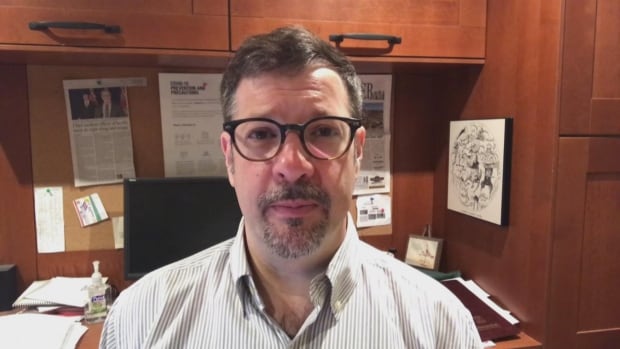 New Brunswick’s decision to focus solely on COVID-19 vaccination in the face of rising COVID cases fueled by highly transmissible Omicron BA.5 and BA.4 subvariants is a “bad strategy “, according to an infection control epidemiologist.

It’s the one that Colin Furness predicts will fail and put children under five, who are currently unvaccinated, at greater risk.

“Every government in the world that has relied on some way to control this has failed,” said Furness, an assistant professor at the University of Toronto. “One strategy is not enough.”

As COVID cases rise and the coronavirus becomes more prevalent in the community, infants and preschoolers will face an increased risk of infection, he said.

“So you have a lot of childhood illnesses that would be completely preventable if we worked to reduce the prevalence,” he said.

Furness was responding to comments earlier this week from the province’s chief medical officer, who said a return to mandatory masking or other protective restrictions was not being considered.

“At this point…we don’t have that conversation,” Dr. Jennifer Russell told CBC News.

“The message right now is about vaccination, because that’s what’s going to reduce the risk of having serious consequences and requiring hospitalization.”

On Tuesday, the province announced it was now offering a fourth dose of a COVID-19 vaccine to anyone 18 and older, provided five months have passed since their last dose.

The decision to lower the eligibility age from 50 comes as COVID has claimed the lives of four more New Brunswickers over the past week, the number of hospitalized COVID-19 patients nearly doubled to 95, seven of which require intensive care, and nearly 2,500 new infections have been reported, according to figures released on Tuesday.

Furness agrees with the expanded eligibility for second boosters, but is disappointed with the change in public messaging, urging those at particular risk to get the extra dose instead of encouraging everyone to get vaccinate to help protect those who cannot.

After more than two years of the pandemic, Furness called it a “huge mistake” not to recognize that a “multimodal strategy” is needed.

Ontario is taking a similar approach, “meaning we’re not going to do anything. We’re just going to sit and watch and hope it doesn’t get really bad, even though we know health care are really tense. And we’re going to suggest that vaccination might be a good thing,” according to Furness. “And that’s not enough.”

This too, he argues, is a mistake.

One of the problems, Furness said, is “there’s been so much public confusion and scientific change around masks that there’s a lot of room for people to say, ‘Oh, masks don’t work. not “.

Also, while the federal government and many countries have recognized that COVID is airborne, they don’t know of any provinces that have.

“It’s a problem because if you haven’t recognized it, you’re not really educating people that they actually need to wear respirators” to protect themselves from an airborne pathogen. ‘air.

“You’re increasing the cacophony, the confusion, the resistance, and you’re also missing a real opportunity for people to truly stay safe.

“So it’s not just about, should we mandate masks? We have to provide respirator masks. We have to educate people about them. And that’s what’s not happening. And that’s , I think, really short-sighted.”

With the knowledge of masks, mask mandates might not be necessary, Furness suggested.

A behavioral scientist steps in

People will wear masks if they know a good reason to do so, according to Simon Bacon, a behavioral scientist at Concordia University in Montreal.

It’s no surprise that many people aren’t wearing masks despite a resurgence of COVID-19, he said.

By removing the mandates and not providing more information about the risks and benefits, the government has sent the message that masking is not important and that all is well.

“You know, masks have been very politicized. And, you know, we’ve heard a lot of political rhetoric around masks. So, you know, they come with some baggage at this point,” Bacon said.

“So people have to kind of assess their own personal risk. They have to assess the risk that they put other people they interact with.

“Someone can be young and healthy and vaccinated and ready to roll the dice on whether or not they get COVID. But they have to think about who they are interacting with. What would be the consequences if they got COVID Who would he pass it on to? at?

“You might not end up in the hospital, but a lot of people are knocked out for a week. Well, we’re about to [in] the holiday season. Does anyone want to feel, you know, lazy and have symptoms and think about going on vacation? Probably not.”

As the number of cases increases, Bacon expects more people to start wearing masks again and to be more careful about hand washing and keeping their distance from others. That’s what happened during the spikes earlier in the pandemic, he noted.