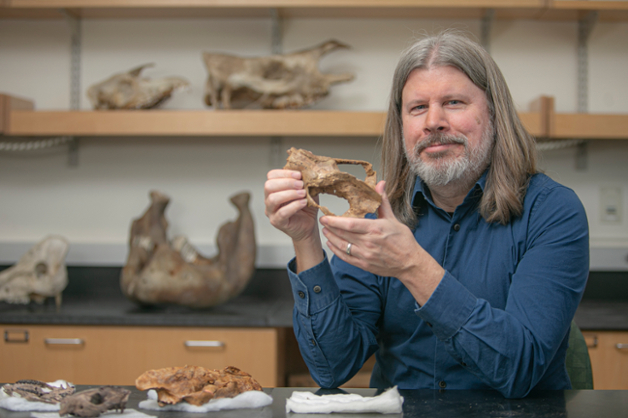 After the last dinosaurs were wiped from the Earth about 65 million years ago, the little, insect-eating mammals scurrying over the land first developed larger bodies to compete for survival—and only later grew larger brains, according to research published March 31 in the log, Science.

A team led by the University of Edinburgh based the findings on painstaking work to locate, scan and characterize ancient fossils from 36 mammalian groups stored in the collections of museums scattered around the world.

Luke Holbrook, Ph.D., a paleontologist and professor in the Department of Biological Sciences at Rowan University’s College of Science & Mathematicsand his research partner, Stephen Chester, Ph.D., at Brooklyn Collegewere among the paper’s 16 authors.

Since 2016, with support from the National Science FoundationHolbrook and Chester have been working to create digital scans of little-understood mammal fossils to better study their anatomy and figure out how the mysterious mammals that lived just after the time of dinosaurs are related to modern animals.

“We find a lot more larger mammals after the dinosaurs go extinct,” Holbrook said. “Mammals are also known for having bigger brains than other vertebrates, so one of the questions we were looking at was, what came first? Did mammals start getting bigger or did they start getting brainer?”

First, researchers needed the raw data collected from rare fossil specimens with intact skulls from the 10-million-year period after the extinction of dinosaurs, called the Paleocene.

To create 3D digital scans, fossils are placed into the museums’ CT scanners or, in some cases, brought carefully by hand down to a CT scanner at Duke University in Durham, North Carolina. Depending on the item’s size, it takes hours to scan just one specimen. Each scan generates an enormous amount of data that then needs to be curated and analyzed. The 3D images are so detailed, it’s possible to identify different parts of the brain.

Paleontologists have been using this technology since the 1990s, but the work requires a lot of time.

“There is so much material and only so many paleontologists” interested in early mammals, rather than dinosaurs or early humans, Holbrook said.

Between them, Holbrook and Chester contributed data from a half dozen fossils to the research on mammalian brain development led by Dr. Ornella Bertrand, of the University of Edinburgh’s School of GeoSciences.

Holbrook’s own work is focused on figuring out how, when and where mammals evolved millions of years ago into different groups in order to fit them into the evolutionary family tree.

“The brain is obviously a fascinating part of mammal anatomy,” Holbrook said, “and a fascinating story in terms of how they became very different from other vertebrates and the role brain evolution played in why mammals have been so successful during the last 65 million years.”