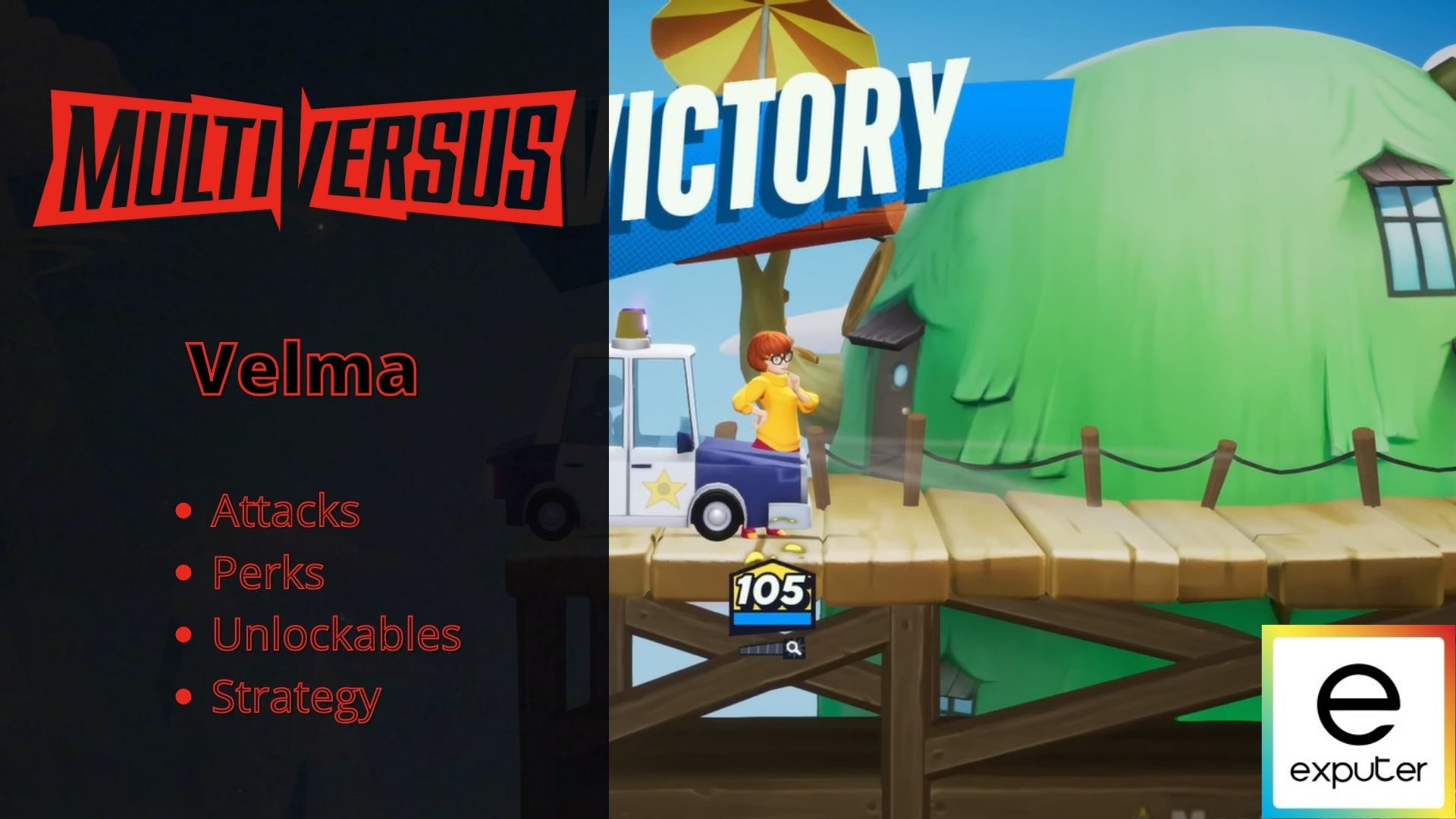 MultiVersus is a brand new free game developed by Player First Game. Multiverse is a crossover game that features many characters owned by Warner Bros, such as Batman, Finn the human, Tom&Jerry, and more. For this guide, we’ll be focusing on Scooby-Doo’s Velma and her abilities in MultiVersus.

MultiVersus’ game draws a lot of inspiration from Smash Bros. from Nintendo. If you are a fan of this game, you will feel at home with MultiVersus. Now, before starting the definitive guide to Velma and her abilities, consider reading our guide Multiverse Tier List in which we classify each character in MultiVersus.

First introduced in the popular TV show Scooby-Doo. Velma is a support character in MultiVersus, which means she can power up her allies during battles. If used correctly, this ability can give players an extra edge and turn the tide of battle.

Velma solved mysteries since most people reading this were still in first grade. Which makes him one of the iconic characters that most people will instantly recognize in MultiVersus.

Velma can be unlocked as a playable character through two methods. The first method will be to buy it with 2000 gold coins which can be earned by completing challenges in MultiVersus.

The second method is to buy it with 700 Gleamium. Gleamium is purchased using real money. This method is available for players who do not wish to spend more time panning for gold.

In this section we will explain in detail all the moves and attacks that Velma can use in MultiVersus. Let’s start with his attacks.

Here is a list of all the attacks Velma can use in MultiVersus.

words of support ability is a healing ability. Velma shouts a word bubble projectile that seeks her ally. If the bubble hits a character on the ring, then they become targeted and additional bubbles lock onto their location. Targeted allies will briefly gain Hastened.

If the player was already targeted before, it will fire an additional bubble and lightly heal Velma. She can use this ability until her ammo runs out.

Master of the joke

The Master of the joke attack performs a Quips combo.

With the brilliant idea attacks, Velma charges with an idea bulb. It has a chance to generate evidence if hit.

In the Light them up attack, Velma charges up a flashlight flash. It has a chance to generate evidence when hit.

The Bright Air-Idea The attack is similar to the Bright Idea attack, except without the charge.

The My glasses! attack pays homage to the original TV series. Velma briefly drops her glasses, causing enemies to fall down.

Velma delivers a motivating vocal beam projectile that strikes enemies and heals allies. The beam’s final hit will apply targeted, so choose your final target wisely. If it hits an ally, it will fire an additional beam. If the final beam hits an enemy, they will receive a debuff stack.

It has a chance to generate one-hit evidence, and Velma can aim that beam up or down.

With this ability, Velma charges a forward sprint. Players can increase sprint speed by charging. Allies can jump into Velma’s arms for sprinting, granting Velma and her allies armor, gray health, and increasing attack power. At the end of the sprint, enemies can be grabbed and thrown upwards.

Velma leaps up and drops a poisonous goop on the floor. Enemies standing on the goop will receive stacks of ice before eventually freezing.

Velma throws the book at her ally. If the book hits the ally, then Velma and the ally receive “Educated”. It reduces and refreshes their cooldown duration

Velma opens a book which propels her forward and pushes the enemy back.

Velma uses her camera to take a downward shot, which sends her opponent upwards. It breaks the armor and applies Weakened to the hit. This causes victims to receive more damage and knockdowns. This attack has a chance to generate evidence on hit.

Velma only has one passive ability named Snoop. Some of Velma’s moves generate evidence, and other than that, evidence will spawn throughout the game. As you collect evidence, your evidence meter fills up. When full, players can call in a police car that will grab an enemy, disable them, and attempt to exit the map.

Enemies have to fight if they want to escape the police car. Your enemy’s teammates can attack the police car in an attempt to free their teammate.

Advantages of Velma in MultiVersus

Perks are unlocked when you earn XP after completing challenges. These perks can unlock new perks for the character. If players unlock a Train Perk on another character, it would make it cheaper to buy. However, signature perks are exclusive to the character they are unlocked for.

We have divided perks into different sections, such as attack and defense, in this guide. Let’s start with the offensive advantages.

Here is a list of all the offensive perks currently available to Velma in MultiVersus.

The Beaten down the perk increases your team’s damage with projectiles by 5%. This perk is unlocked at Mastery Level 2.

The painted target perks will increase your team’s damage by 5% if the enemies you hit are stunned. The perk is unlocked at Mastery Level 4.

The Sniper Cannon Shirt the perk will increase your team’s projectile damage by 7% if the enemy is far from your location. The Shirt Cannon Sniper perk is unlocked at Mastery Level 11.

The Ice to beat you The perk is unlocked at Mastery Level 12. With this perk, your team’s projectile will inflict a stack of Ice Debuff if it knocks enemies back.

There is only one defense perk for Velma in MultiVersus named the Sliding Customer. The perk is unlocked at Mastery Rank 7 and increases the duration of your team’s invulnerability window by 10%.

Similar to the defense perk, there is only one utility perk for Velma in MultiVersus. He is named the Hit me if you can. This perk will increase your team’s dodge speed by 5%. It is unlocked at Mastery Level 13.

Two signature perks are available for Velma in MultiVersus.

With the Studied Perk, Velma will appear with an already collected piece of evidence. It is unlocked at Mastery Level 8.

With the knowledge is power perk, Velma’s allies will receive 7 gray health after collecting evidence. This perk is unlocked at Mastery Level 10.

We have a guide prepared for Best perks in MultiVersus in case you are interested.

Enough about abilities and perks; let’s get into all the cosmetics you can unlock for Velma in MultiVersus. There are currently only three unlockables available for Velma.

The Velma Luau unlockable is essentially a new skin for Velma in MultiVersus. This variant can be purchased for 1500 Gleamium.

As its name suggests, the Advertiser package Velma is an advertiser pack. It can be purchased for 100 Gleamium.

The Dance unlockable is a taunt emote for Velma in MultiVersus. This emote can be purchased for 500 Gleamium.

See how Velma is a supporting character. Your number one priority should be keeping your distance from your enemies and using your tools to provide buffs to your teams. Velma can also heal her allies, so keep an eye on their health and heal them when she seems too weak.

Velma’s moveset is a little slow compared to other characters that specialize in close combat, so players should be careful about that. It is also not recommended to collect evidence selfishly, as it can cause too much damage to teammates, as they focus more on collecting evidence.

Therefore, the main strategy should always be to keep your distance and support your team using your skills and tools.

That wraps up our guide to Velma Attacks, Perks, Unlocks, and Strategy in MultiVersus. Velma is primarily a supporting character; thus, it is not recommended to be used in close combat. She should be used to provide support to her allies from a safe distance. In this guide, we have told you all about Velma in MultiVersus.

The game is now available on PS4, PS5, Xbox One, Xbox Series S/X and PC. We hope our guide helped you get a good understanding of the character. Let us know what you think of the game in the comments section below.