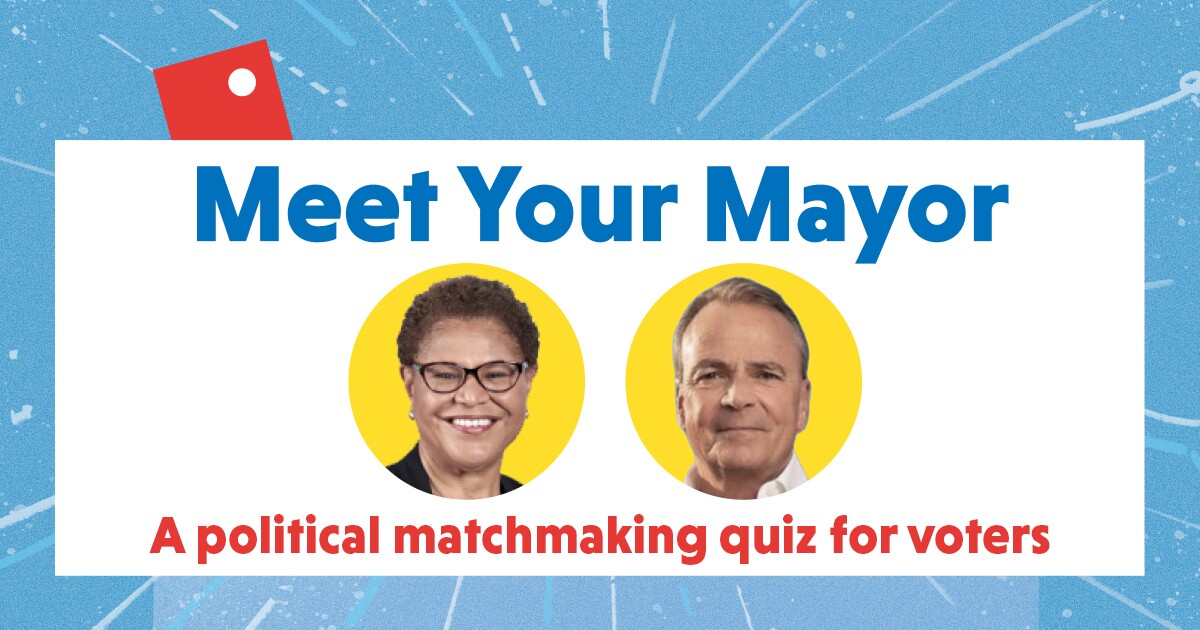 Sign up for the Morning Brief, delivered on weekdays.

gHello, LA We are August 5th.

It’s finally Friday. I’m thinking of the beach – weather permitting, of course – and dinner plans. Choice – you know? And you may have to make a very important one at the end of the year.

Who will be your next mayor?

That crowded field of candidates to replace incumbent LA Mayor Eric Garcetti is now down to two: Karen Bass, who received 43.11% of the primary vote, and Rick Caruso, who won 35.99%.

You’ve probably been inundated with advertisements and news reports. This does not necessarily mean that it is easier to make your choice.

That’s why we brought you Meet your mayor for this election. This is a quiz that asks you and applicants the same questions so we can “match” you with the person closest to you on key issues such as housing, homelessness, the police and the climate emergency.

About the morning brief

Here’s an example: In June, we asked candidates where they stood on the size of the LA Police Department and the funding of the force. Bass said she would fill vacancies to bring the force up to its fully authorized size of 9,700 officers, while Caruso said he would expand the LAPD to 10,000 officers or more. Caruso also said he would increase funding for the LAPD, while Bass said she would keep funding at its current size.

Many of you have told us that the quiz helped you make up your mind (yay!), so we’re doing it again for the second round in November. We will publish our new quiz at the beginning of October to prepare your ballot.

What we need to know about you now is what you want us to ask candidates. We have already received a lot of questionsincluding:

Got a question for Bass and Caruso as you prepare to vote? Share it here.

As always, stay happy and healthy, friends. There’s more news below the fold.

What else do you want to know

Before You Go… Practicing Digital Minimalism

Have you passed TikTok after TikTok after another and you look at the clock and it is well past bedtime? I am guilty. (This week, I got stuck on Bad Bunny concert videos.)

But the fact is, many of us are addicted to our phones. Social networks, apps, SMS – you know how it goes. A recent survey claimed that Americans check their phones every 4 minutes, according to NPR.

Don’t trip there are ways to downsize without going back to a flip phone.

There is also a term for this: digital minimalism. It was invented by a computer science professor who wrote a book about it. Check out this NPR story on how to find a good balance in your relationship with your phone.

Help us cover your community