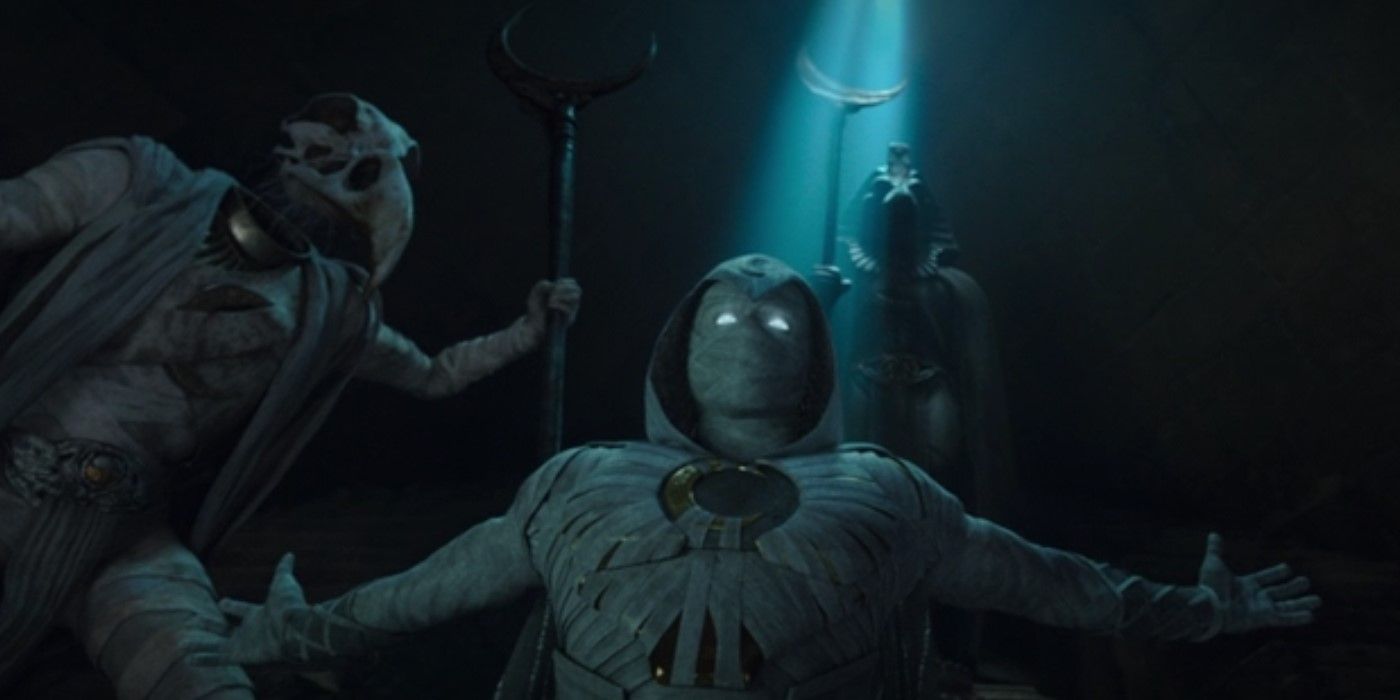 Disney+’s Moon Knight is getting a new trailer looking back at the show and teasing events to precede the show’s upcoming epic conclusion.

Disney+ Moon Knight gets a new trailer ahead of the show’s upcoming finale.

The trailer takes audiences through the thrilling and harrowing events of the series before giving them a glimpse of the showdown to come. Clips show Moon Knight gliding through the air and facing off against Arthur Harrow on the side of one of Egypt’s famous pyramids.

RELATED: Moon Knight Explains Why the Walls Between Marc and Steven Began to Crumble

Previously released clips focused on the inevitable battle between cult leader Harrow and the Fist of Khonshu. The series teased a battle between the two, despite missing each other for one reason or another. Recent episodes have seen the two in a different dynamic, where Harrow is Marc Spector’s psychiatrist and Marc is a patient at a mental health facility. This follows a clash in the hidden tomb of Alexander the Great, which resulted in Mark being shot.

Moon Knight has been well received since its first installment, with many comparing it favorably to some of the other emotionally powerful projects that make up the Marvel Cinematic Universe, especially after the series’ fifth installment. The show even made it into Nielsen’s Top 10 Streaming TV Shows, though it still trails some of Marvel Studios’ other Disney+ series, including Hawk Eye, Loki, The Falcon and the Winter Soldier and Wanda Vision.

Not much is known about what audiences can expect from Moon Knightseason finale. It was reported early on that the sixth episode of the series would be the shortest. While all of the released episodes except for the first episode are over 50 minutes in length, the finale is believed to be 42 minutes in length. That would be about five minutes shorter than the series premiere episode, “The Goldfish Problem.”

The titular superhero’s future remains uncertain, although star Oscar Isaac has previously said he would be happy to reprise the role. “It depends if people see the show first. If they see it, then maybe we’ll see more of Moon Knight,” Isaac said ahead of the series premiere. “But I love playing with him. Especially Steven. I hope I can visit him again. I love him so much. I didn’t feel that kind of connection.”

Narayan Liu (/Nəraɪʌn Lɪʊ/ in IPA) is a feature and news writer, and junior editor at CBR. From Hong Kong, currently based in Sweden. These days, Narayan writes about movies, TV shows, comics, and video games, or anything related to The Witcher. He does this while studying language, culture and communication at Linnaeus University. You can follow him on his blog (narayanliu.wordpress.com), on Twitter (@Narayan_Liu) or contact him directly at Narayan(dot)Liu(at)gmail.com.