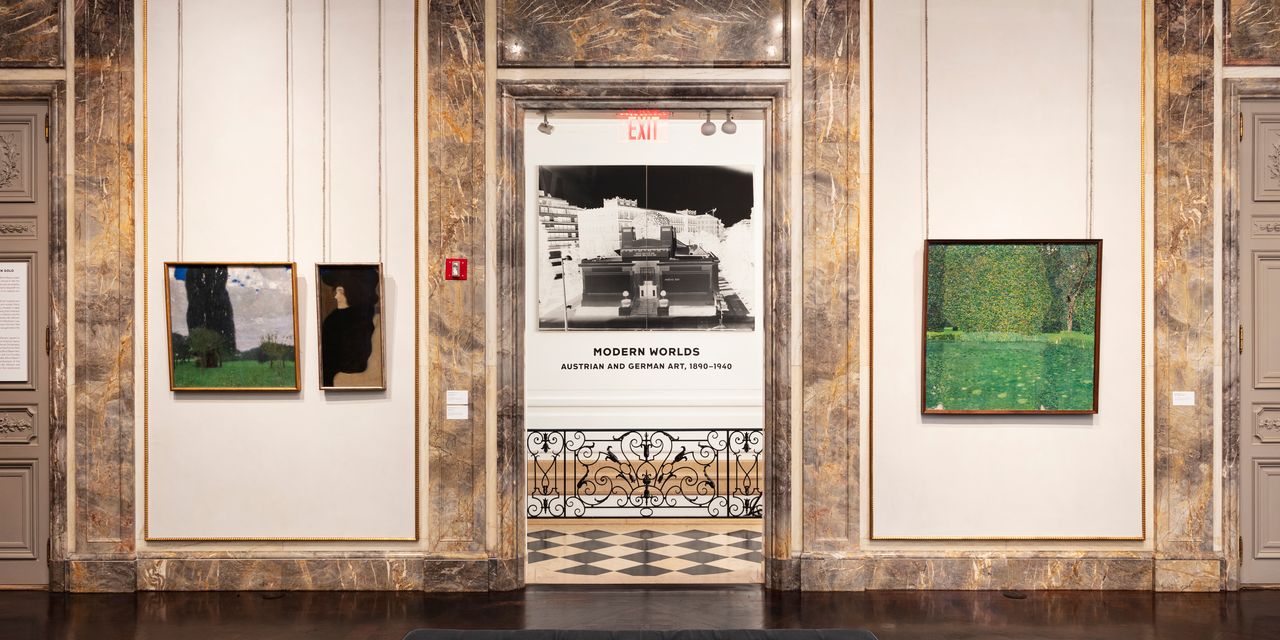 The Neue Galerie here is no longer ‘new’. Nor has the museum ever concerned itself with new – as in contemporary – art. Inspired by old art institutions, most notably the Neue Galerie in Vienna, founded in 1923, opulent Neue Galerie New York (opened November 2001) at certain times and places in the past. Originally conceived by the art dealer Serge Sabarsky (1912-1996) and by the heir to the cosmetics company Estée Lauder and art collector Ronald S. Lauder, it is a museum – whose determination is almost fetishistic in nature – mainly devoted to the exhibition, study and preservation of early 20th-century German and Austrian art and design.

Neue focuses on German Expressionism, the Viennese Secessionists, the Blaue Reiter, the Brücke, the Wiener Werkstätte, the Neue Sachlichkeit, the German Werkbund and the Bauhaus. But no art movement exists in a vacuum. And Neue, which keeps getting bigger and connecting the dots, is inspired by the excellent scientific exhibitions “Klee and America”, “Van Gogh and Expressionism”, “Degenerate Art: The Attack on Modern Art in Nazi Germany, 1937” and “Russian modernism: cross-currents of German and Russian art, 1907-1917.”

Once Neue Galerie opened the doors of its lavish Carrère and Hastings-designed mansion on Fifth Avenue—the former residence of the likes of Grace Graham Wilson Vanderbilt (widow of Cornelius Vanderbilt III)—it became a mainstay of New York’s Museum Mile. Neue’s current doyenne is Gustav Klimt’s “Portrait of Adele Bloch-Bauer I” (1907) – a stunning, modern-Byzantine exercise in the extravagance of Viennese Art Nouveau. More crown jewel than painting — and also known as “The Woman in Gold” — Klimt’s gleaming, life-size oil, silver, and gold portrait has featured prominently in the museum since 2006, when Mr. Lauder bought it.

In November, in honor of its 20th anniversary and the reopening of all its galleries, and also missed, Café Sabarsky, Neue (closed in whole or in part since March 2020) has “Modern Worlds: Austrian and German Art, 1890-1940” mounted. It also published a landmark book, which, edited by Renée Price, doubles as a Neue Galerie guide and historical tome.

Neue’s glittering ‘Adele’, though too garish and decorative for my taste, holds up, of course (I prefer the subdued, nearby scenery of Klimt’s 1900s ‘The Large Poplar Tree I’). “Adele” rules over Neue and the shame of wealth of this show – as she overlooks Central Park like a queen overlooking her kingdom from her throne. Adele Bloch-Bauer was Klimt’s only patron to commission multiple portraits, and “Modern Worlds,” in a gallery of 60 drawings hanging from cheek to cheek, features half a dozen of Klimt’s charcoal studies of Adele in flowing robes – alongside romantic landscapes by Alfred Kubin and portraits and shamelessly erotic nudes by Klimt, Egon Schiele and Oskar Kokoschka.

Visitors who have visited Neue over the past two decades are no doubt familiar with Klimt’s “Woman in Gold” – and with Neue’s sexually charged works by these and other artists, such as Otto Dix and Christian Schad, whose oil portrait “Two Girls” (1928), featuring depictions of women pleasuring themselves (a popular theme here), regularly takes the stage among the museum’s supporting cast. These include Schiele’s “Man and Woman I (Lovers I)” (1914), whose figures feel carved from stone; Max Beckmann’s burly “Self-portrait with horn” (1938); Schiele’s gaunt male nudes—as if flayed to raw muscle, sinew, and bone; and Ernst Ludwig Kirchner’s vibrant paintings “Tightrope Walk” (1908-10) and “Berlin Street Scene” (1913-14) and his tender, primitive woodcarving sculpture, “Standing Girl, Caryatid” (1909-10).

There are also paintings by Erich Heckel, August Macke, Franz Marc, and Vasily Kandinsky, in which heightened color, while lofty, never feels like mere embellishment. Max Pechstein’s exciting portrait “Young Woman with a Red Fan” (ca. 1910) lights up the room like a blazing fire. Abstractions from Paul Klee, such as “Gay Repast/Colorful Meal” (1928) and the genre-bending “Mystical-Ceramic (In the Manner of a Still-Life)” (1925) – which also includes portrait, landscape, theater and dream – deliver mysterious ballast.

If you’ve never crossed the threshold of Neue Galerie, now is a perfect time to see what it’s all about. For the rest of us, this remarkable exhibit – Neue’s most complete and compelling presentation confirming the passions of Sabarsky and Mr. Lauder – will feel less like another parade of the greatest hits and more like an extended family reunion, where everyone is happy. to be home again.

-Mr. Esplund, the author of “The Art of Looking: How to Read Modern and Contemporary Art” (Basic Books), writes about art for the Journal.