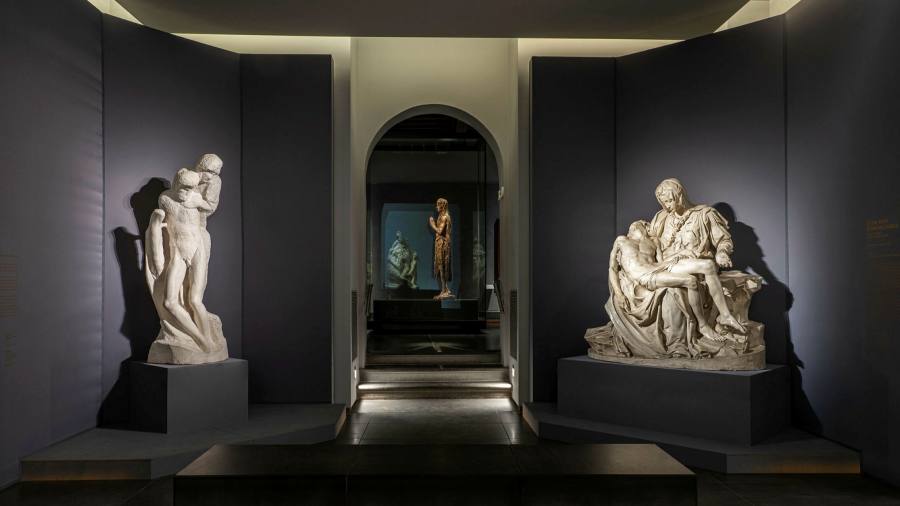 “No one thinks how much blood it costs” is the subtitle of The Three Pietas of Michelangelo, an intensely affecting, small and momentous exhibition at Florence’s Opera del Duomo Museum. Michelangelo inscribed that quotation — from Dante — on a Pietà drawing, to express his own difficulties. In concentrated form, his depictions of the Virgin Mary supporting the body of the dead Christ map his artistic and spiritual evolution: the famous, classically beautiful early one (1498-99) at St Peter’s, which established his reputation; the Duomo Museum’s contorted, enigmatic, four-figure Bandini Pietà (1547-55); and the (deliberately?) unfinished Rondanini Pietà, kept secret until his death in 1564 and, to our eyes, a masterpiece of modern fragmentation.

Working on the Bandini, Michelangelo wondered what he was doing “with false conceptions and great peril to my soul, to be here sculpting divine things”. During the pandemic, Florence took the opportunity to clean and restore the piece, which had accumulated centuries of dust, obscuring the marble’s delicate coloring and patina. Gleaming, it returns to display in the Tribuna gallery, flanked by loans from the Vatican of plaster casts of the St Peter’s and Rondanini Pietàs. The three pieces face one another in an intimate, close-up presentation. This is a unique opportunity to consider the trio together. It offers much nearer, eye-level access than in Rome — the St Peter’s Pietà is placed (since a 1972 attack) behind bulletproof glass — and is especially fascinating in exploring links between the Bandini and Rondanini, housed in Milan. (A version of the show travels there in the autumn.)

At the threshold of the group in Florence stands the gaunt, wooden “Penitent Magdalene” by Donatello — an important example of the older artist’s expressive realism, a shaping force on Michelangelo. You also pass Ghiberti’s glittery bronze doors, engraved with animated, fluid figures, which Michelangelo admiringly named the “Gates of Paradise”. The context shows influences absorbed and transformed — emphasizing the original genius of the first Pietà, and the oddness of the later ones, which Michelangelo was so reluctant to show. Forbidden to enter, Vasari glimpsed the Bandini from the artist’s doorway one evening. When Michelangelo saw him peering in, he dropped his lamp and said: “Soon I shall fall like this lantern and my light will go out.”

The Three Pietas is about light in darkness. Brilliant spotlights shine on the works in which Michelangelo invented an iconography of suffering, redemption through love and, perhaps, faith. Florence’s exhibition, conceived amid pandemic grievance, necessarily relates now to European war. Duomo Museum director Monsignor Timothy Verdon says that Mary holding her dead son seems to evoke “the personal suffering of mothers who hold their children not knowing if their children will survive”. The huddled Bandini figures call to mind families sheltering in bombed-out bases. The dead Christ in the Rome Pietà represents every slain young soldier — partly because he is modeled on ancient reliefs of warriors being carried after heroic death in battle.

Commissioned by enlightened diplomat Cardinal Bilhères, the St Peter’s Pietà marks a signal moment of convergence between classical and Christian thinking, amid the rediscovery of the antique. In their naturalism and grace, the figures show Michelangelo’s study of anatomy through life drawings, dissection and attention to ancient models. Christ’s body is that of a Greek god, physically perfect, as if asleep — scarcely violated by torture and death. This makes the expression of Mary psychologically possible: a young-looking Virgin of the Annunciation, rather than the mother of a 33-year-old corpse. Eyes downcast, her veil shadowing her face, she looks almost as if she is gazing on a slumbering infant.

Michelangelo called the Roman Pietà “the heart’s image”. Although small wooden German renderings appear in medieval times, it was Michelangelo, at a zenith of youthful ambition and confidence, who defined for all time the motif of the mother supporting her dead son. The proportions, the pyramid structure of Mary protecting Christ within her robes, which in turn form pockets of light and shadow, convey harmony, peace, acceptance.

Revisiting the subject in his seventies, Michelangelo’s impetus was different. Creating the Bandini Pietà for his own tomb, he chiselled his features in the face of Nicodemus, a huge presence, supporting the others. All four figures are carved from a single block of marble weighing 2,700kg, though Michelangelo complained that the stone was “full of impurities”, adding to his torment over the work. He broke parts of it in frustration.

Pathos here is harrowing. A crumpled Christ is no longer the human body triumphant but slumped, left leg missing, right one broken. The geometry of the figural relationship, a tense criss-cross, implies pain and doubt. Mary’s expression and gestures are distraught, her arms hardly bear the weight of her son. The fourth figure, Mary Magdalene, looks away, dissociated, disbelieving. Rilke, responding to this vision of alienation in his poem “Pietà”, has her cry: “Jesus, when was our time? Now, strangely, we perish together.”

How much this was Michelangelo’s intention is uncertain — after the banker Francesco Bandini bought the work, an assistant “restored” ruptured limbs and “completed” the Magdalene’s face. But what becomes clear here is how the Bandini’s fierce lamentation prepared for the greater extremes of fragility and imperfection in the smaller, condensed Rondanini.

From Nicodemus’s pose comes Mary’s supporting stance. From the agonized connections between the Bandini quartet comes the fusion of the two Rondanini figures, mother and son. Drapery is gone, pared down, bodies are almost dematerialized into abstraction. Alongside stands, bizarrely, a free-floating limb. Restlessness is palpable.

Michelangelo labored on this meditation on art and mortality until his death. Interpretations have varied, from the official inventorying his possessions — “Christ with another figure above, stuck together, rough and unfinished” — to Henry Moore’s celebration of “the most moving sculpture” ever made. “In the Rondanini Pietà,” Moore said, “there’s a whole of Michelangelo’s 89 years’ life. . . the kind of quality you get in the work of old men who are really great. They can simplify; they can leave out.”

The Duomo catalog argues for Christian hope but you don’t need to be religious to feel the power of the turbulent, non-finito late fashion. The final Pietà expresses uncertainty and struggle, and also that love and pain are infinite.