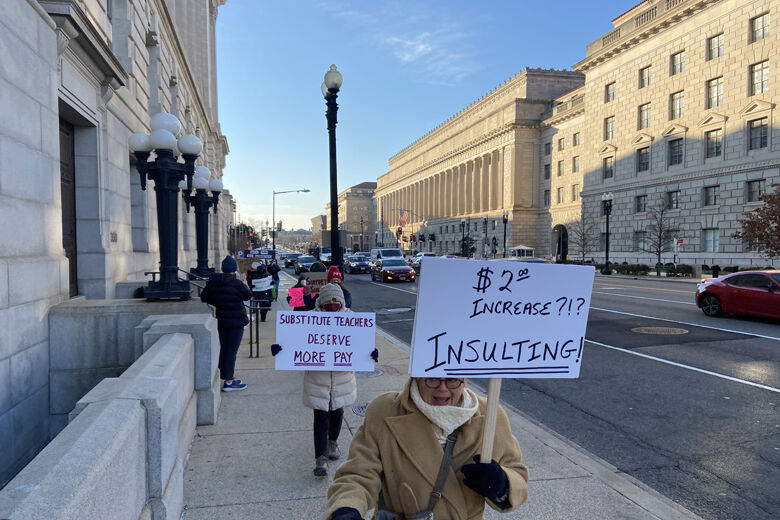 The delay is the latest in the clash between city leadership and substitute teachers, at a time when substitutes are in high demand.

Months after DC Mayor Muriel Bowser announced a pay increase for the city’s substitute teachers, the substitutes still haven’t seen the spike in their pay checks.

Bowser first announced an increase in January and said an even higher rate would be offered effective immediately on Feb. 7. However, DC substitute teacher Janine Fitzpatrick told WTOP that nothing has changed.

DC Public Schools Chancellor Lewis Ferebee said at an education budget hearing last week that technical issues with providing the extra pay have caused the delay, but said all substitutes would be paid retroactively.

In a statement, a school system spokesman said the city regrets the delay, “and will inform impacted substitute teachers of next steps as soon as possible.”

The delay is the latest in the clash between city leadership and substitute teachers, at a time when substitutes are in high demand.

In January, Bowser announced daily substitute teachers would receive a pay increase from $15.20 an hour to $17 per hour.

Then, the group Washington Substitute Teachers United rallied outside the Wilson Building, calling the increase a “slap in the face.” So, in February, Bowser said the rate would change “up to $20 per hour for a regular daily substitute and $25 an hour for a long term substitute who will teach for … at least 30 consecutive days in our classrooms.”

However, substitute teachers haven’t yet seen the increase in their checks. In January, DCPS said its substitute pool had 521 people.

Fitzpatrick, a substitute teacher at Alice Deal Middle School, said she has asked school system staff when the increase will go into effect, but has only been told that the pay will be retroactive to the date of the announcements. The only form of communication she said she received from the city was an email announcing the initial pay increase in January.

A council spokeswoman said Council member Christina Henderson has also recently spoken to a group of substitute teachers and heard they still haven’t received the increase in pay.

“(The mayor) could promise $1,000 a day for us, but if she doesn’t actually follow through with any of that, then those are just empty promises,” Fitzpatrick said. ” … She can say whatever she wants — it matters that she actually does it.”

At the March 30 education budget hearing, council Chairman Phil Mendelson, after calling communication from the city school system a “chronic problem,” asked Ferebee why an update hasn’t been provided to substitute teachers.

“I have communicated that directly to representatives, but we will cast another net of communication out to substitutes to make sure that they are aware,” Ferebee said. ” … We recognize that the delay has been a hardship for them and we’re working as hard as we can to get those funds out to them.”

In a statement Friday night, a schools spokesman said, “DC Public Schools greatly values ​​the contributions of our substitute teachers, who provide critical support to our schools and joyful learning experiences to our students. We’re working expeditiously to resolve a delay in implementing the recent pay increases and provide retroactive pay to those affected.”

Fitzpatrick, for one, is anxiously waiting.

“We’re following through on our promises,” Fitzpatrick said. “We say we’re going to come in and we do, even though we still haven’t gotten the pay she promised us.”