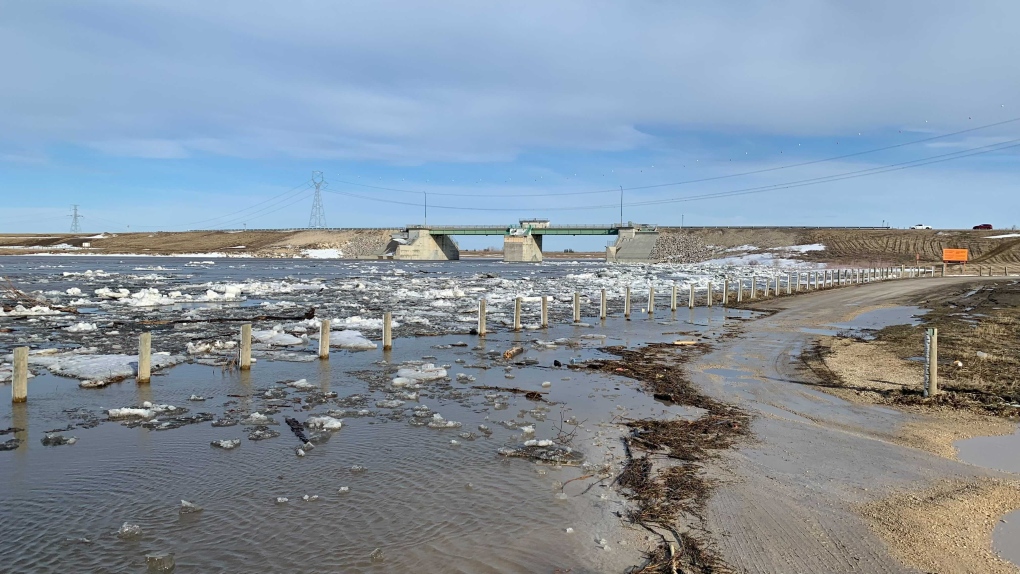 Manitoba’s flood forecasters are monitoring a Colorado low that could bring significant amounts of rain and snow to the Red River basin.

It comes as the province activated the Red River Floodway to divert water from the rising Red around the City of Winnipeg.

North of Winnipeg, communities remain on standby due to a large ice jam on the Red.

So far the situation is under control in the RM of St. Clements on the east side of the Red River.

However, the ice jam could cause flooding along Cooks Creek which empties into the Red north of Selkirk, according to RM of St. Clements emergency coordinator Tyler Freeman.

“And that’ll probably be our big concern until the ice starts to really move but there’s realistically maybe seven or eight properties that we’re going back and forth to,” Freeman said.

Freeman said the RM is ready to help protect those homes from flooding if the creek backs up.

“We’re concerned so we’ll be monitoring that throughout the weekend,” Freeman said. “Communicating with all of our residents, especially the ones that are in those areas to have them ready in case anything happens.”

The province said Friday the Red River has peaked in Emerson, St. Jean and is nearly at its crest near Morris. While those areas remain under a flood warning the province is only expecting a moderate risk of flooding on the Red this spring.

But Environment and Climate Change Canada warns a Colorado low could bring significant precipitation to the Red River basin in the United States by the middle of next week, a system Environment Canada warning preparedness meteorologist Natalie Hasell said could dump more than 30 centimeters of snow on the already swollen Red River.

“Not all of our models are suggesting huge amounts of precipitation, the track of this low is not determined yet,” Hasell said. “The average track has the bulk of the precipitation hitting North Dakota and Minnesota so that will come to us eventually.”

That’s a concern for municipal officials.

“And with the snow and rain that’s supposed to be coming next week it could certainly change what is happening,” said RM of St. Clements Mayor Debbie Fiebelkorn.

On Friday at 9:45 am the province activated the Red River Floodway to help manage water levels in Winnipeg by diverting water around the city.

Despite the ice jam north of Selkirk and the high water warnings in a park along the river, Mayor Larry Johannson said the situation is under control and there are no major concerns about flooding in the community.

“The ice and the water is flowing tremendously and that’s really good news for us,” Johannson said. “The waterfront here is protected and it’s still dry. Our Selkirk park is protected and dry, so we’re in great shape here.”

While Selkirk isn’t at risk of flooding, Johannson said he’s concerned about people who live farther downstream near Netley Creek due to the risk of ice jam flooding.

The province said flood forecasters will continue to monitor the precipitation system moving in next week and its impact on flows and levels as the system develops.