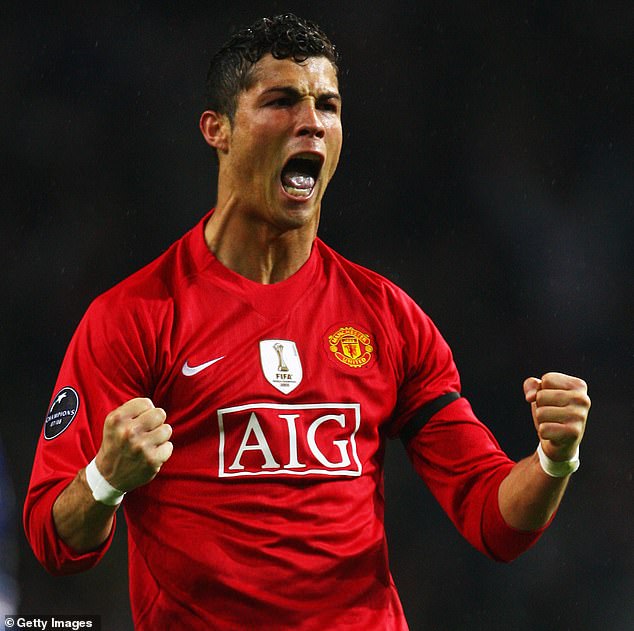 Cristiano Ronaldo scored 24 goals for Manchester United last season, but perhaps his greatest contribution was to boost the club’s commercial appeal in their worst campaign in Premier League history.

United have seen engagement with their social media content, such as shares, likes and comments, nearly double to more than two billion interactions in just 12 months, despite suffering on the pitch.

The arrival of CR7, who has 465 million Instagram followers, in August 2021 signaled a dramatic escalation in social media activity and experts have credited him with the remarkable upturn in the club’s online fortunes.

Of the 25 most popular messages posted by Premier League clubs last season, 10 were about Ronaldo and the top three were about the superstar striker.

As a result, the Red Devils have become the most popular club on social media globally, overtaking Barcelona and Real Madrid for the first time, in terms of engagement.

The numbers are significant because commercial sponsors look at social media interactions when determining where – and how much – to invest. An active and engaged audience is considered more valuable than the total number of subscribers.

The scale of the ‘Ronaldo Effect’ is such that financial analysts believe it will be a major factor behind United’s efforts to try and retain their runaway star this summer.

Ronaldo has asked to leave United and is not on a pre-season tour in Bangkok, where his teammates are due to face Liverpool on Tuesday, after being granted compassionate leave for personal reasons.

“His commercial value will influence the club’s decision to let him go,” said Dr Rob Wilson, a sports business expert at Sheffield Hallam University. ‘United were not bothered by the departure of Paul Pogba [to return to Juventus], but there will be bigger conversations behind the scenes about Ronaldo. It’s more than just a game.

“It’s signings like him that have kept them at the top when it comes to business development rather than falling behind which they should have done given their playing performance.”

“That’s why Manchester United won’t want to sell him. His market value as a player is lower than his value as a business entity,” he added.

“This is the biggest shirt sleeve sponsorship in Premier League history,” said Dr Wilson. And it’s a team that finished sixth.

“What sponsors want is engagement, they don’t care about followers. Engagement exploded under Ronaldo. 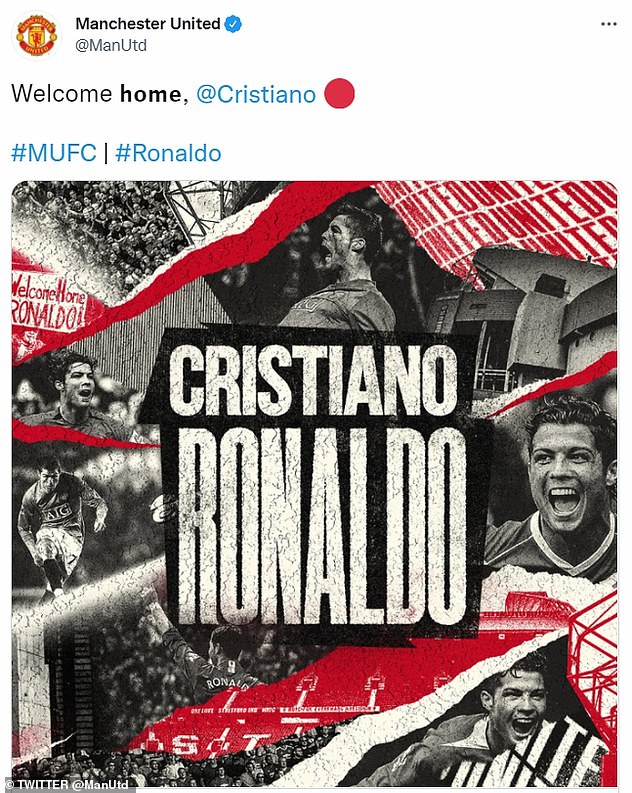 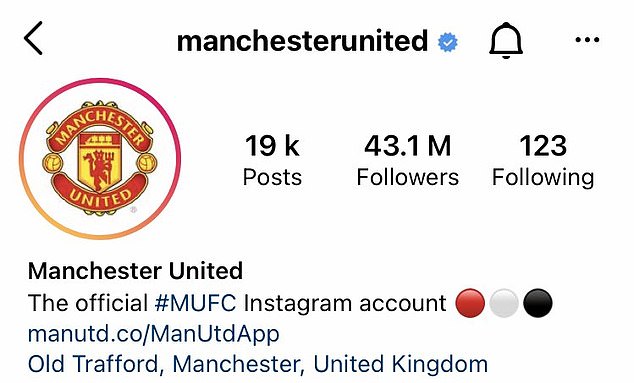 United are still looking to strike new deals with an airline partner, having parted ways with Aeroflot following the Russian invasion of Ukraine, and they are looking for sponsorship for their training ground, so there is a big incentive to keep the five-time Ballon d’Or winner in the building,’ said Dr Wilson.

Moreover, existing sponsors are said to be pressuring the hierarchy at Old Trafford to ensure the superstar striker stays at the club as they have already invested heavily and have done so pending Ronaldo’s levels of exposure. for a few more years.

United bosses, as well as their business partners, are well aware that what Ronaldo brings, Ronaldo also takes away.

Juventus have been given an extraordinary boost during the Portuguese striker’s three years in Turin, but in a new analysis for sports mail by streaming and social intelligence firm Conviva, it’s clear they also suffered a dramatic backlash when he left for Manchester.

“The benefits of having a socially savvy personality like Cristiano Ronaldo on your team exist beyond his footballing abilities,” Nick Cicero, vice president of strategy at Conviva, told Sportsmail.

“Combine that with a charismatic, outspoken and hugely talented individual like Cristiano and you have a recipe for social success.” 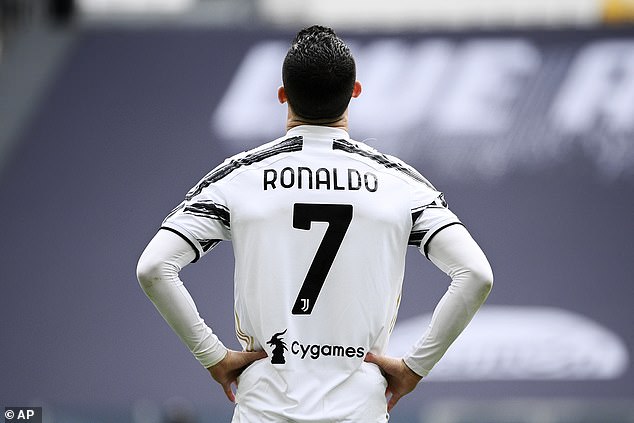 When Ronaldo left Juventus after three years, the club suffered a decline on social media

United appear to have stepped up their efforts to keep the player at Old Trafford, with manager Erik ten Hag unequivocal in his comments in Bangkok on Monday.

Asked about the 37-year-old’s future, ten Hag said: “We are planning Cristiano Ronaldo for the season and that’s it.” I look forward to working with him. Cristiano is not for sale. It is part of our plans and we want to succeed together.

Ronaldo is at the forefront of new trends in football fandom, which have caught the attention of top clubs.

Two years ago mega clubs were rocked by a fan study, commissioned by the European Club Association, then led by Andrea Agnelli at Juventus.

He revealed how the global fan clings to success, but also revealed that among some younger audiences, affinity with a club is determined by their dedication to individual players.

While this was less likely to be the case in countries like England, in some emerging football markets, such as India, which has a population of 1.4 billion, club choice may be influenced by a favorite player among nearly a third of supporters.

Ronaldo is now living proof of how the club can dramatically expand its reach and revenue through its transfer policy, even if it suffers a downturn on the playing field.

Therefore, in the future, super-popular players could help insulate the biggest clubs from the ups and downs of the competition, as Ronaldo did for United, giving them the financial certainty they need. 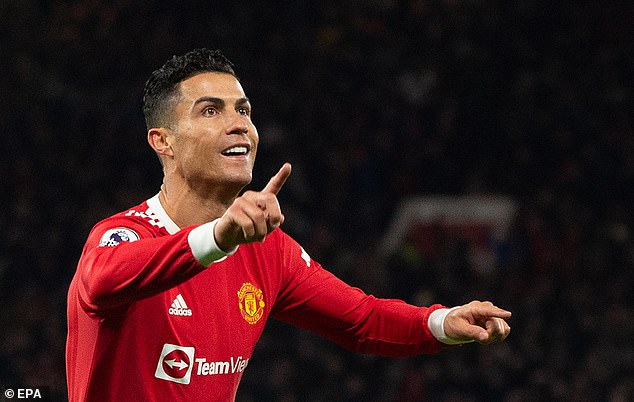 “The benefits of increased social presence, resulting from bringing a savvy player like Cristiano to your team, cannot be underestimated,” Cicero said.

“We expect clubs and sports teams around the world to invest in building the personal brand of their players in order to grow their own brand in the years to come,” he added.

All of this adds a new dimension to signing players.

At United, the total number of engagements with social media posts rose from 1.1 billion the season before Ronaldo’s arrival to more than 2 billion last quarter, with each post generating 75,000 interactions on average. according to Conviva. 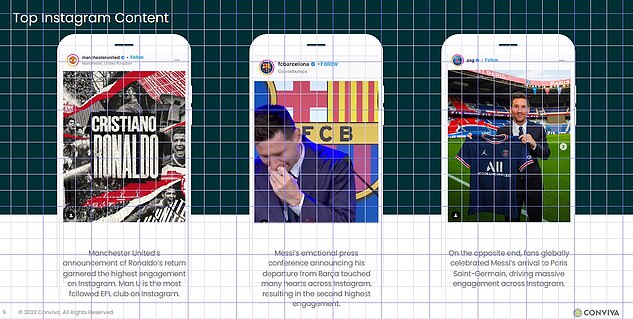 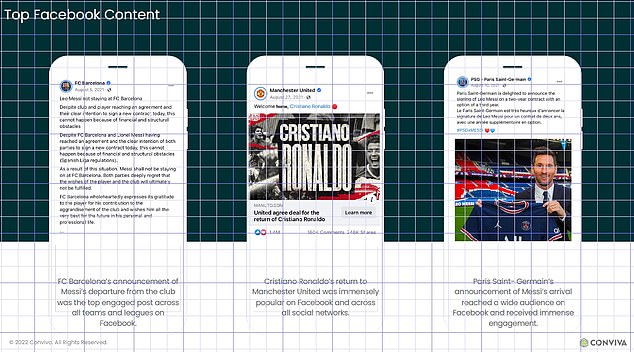 CR7 had a particularly big impact on the video, with the number of views per clip nearly tripling to 193,000. And the total number of followers jumped from 144 million to 170 million.

The achievements are all the more remarkable as the huge growth came in a season in which the side struggled to 16 wins, 57 goals and just 58 points, their worst comeback in nearly 30 years in the Premier League.

Meanwhile, Ronaldo’s departure from Juventus has had a chilling effect on their social media presence, which can hurt the club financially when it comes to negotiating big business deals.

When the Portuguese star signed in 2018, Juve’s income increased by £50m from merchandising, attendance and some deals, according to Forbes. In the second season, the sponsorship with Jeep and Adidas was renegotiated, doubling the money.