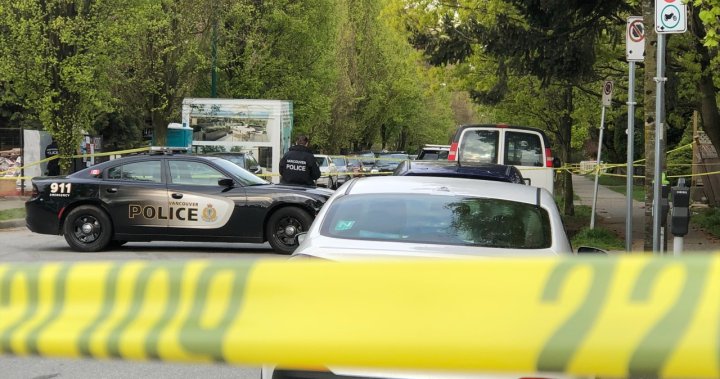 A man died following an exchange of gunfire with Vancouver police on Wednesday evening.

Police said officers were called to a building near Commercial Drive and East 5th Avenue just after 8.30pm following reports of an assault.

Police say there was an “interaction” which resulted in gunfire between the man and police.

2:06
The IIO is investigating a fatal shooting involving an officer in East Vancouver

“They told us there was a guy downstairs with a gun who fired at police for the last 30 minutes,” a neighbor told Global News.

The man, aged 40, died as a result of the shooting, police said.

“We’re pretty scared at this point,” the neighbor added. “(We were) hiding in the middle of the apartment and we hear more gunshots, more police coming with bigger and longer tactical gear and assault rifles. We end up being escorted away.

The suspect’s body was removed by the coroner on Thursday morning.

BREAKING: A body has just been removed from the scene here at Commericial and 5th after witnesses reported hearing gunshots around 9.45am last night. More this AM @GlobalBC @CKNW pic.twitter.com/cWHlFGRU5N

A police officer was taken to hospital with non-life-threatening injuries.

They are now discharged from hospital and are expected to make a full recovery.

The Office of Independent Investigations confirms that it is investigating the case.