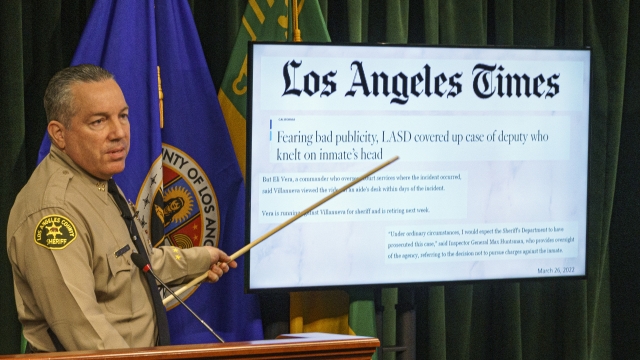 A deputy used his knee against an inmate’s head to restrain him, and internal documents show the sheriff’s department tried to cover it up.

Los Angeles prosecutors are convening a grand jury to investigate the Sheriff’s Department’s handling of an incident in which a deputy knelt on an inmate’s head and kept his knee there for three minutes.

“We don’t have time for this internal nonsense, let me see if we can blast the sheriff,” Los Angeles County Sheriff Alex Villanueva said.

Villanueva insists he didn’t know about the incident until months after it happened, when he ordered a criminal investigation and relieved the deputy of his duties.

But sources inside the sheriff’s department told the Los Angeles Times that the sheriff knew about it just days after the incident.

Internal documents show the department attempted to sweep the incident under the rug to avoid bad press and public parallels to the killing of George Floyd in Minneapolis, Minnesota.

Deputies accompanied two detainees into a room during routine checks as the detainees awaited their court appearance. One of the inmates punched a deputy, and several deputies rushed into a physical struggle with the man to restrain him.

After the inmate was on the ground, a deputy placed his knee on his head.

He kept it there for minutes, even after the inmate stopped resisting, according to Sheriff’s Department officials who viewed the video.

The incident and alleged cover-up comes amid dwindling ranks of law enforcement in Los Angeles.

“A number of our specialty units have been disbanded or significantly reduced due to our downsizing,” Los Angeles Police Department Chief Michel R. Moore said.

In Los Angeles County, it’s another scandal for a sheriff accused of corruption, overseeing a department where deputies are accused of belonging to gangs.

The assembly of a grand jury is not a surprise for the sheriff.

“We are more than happy to be required to testify under oath in any court of competent jurisdiction on this matter, in front of a grand jury, in federal court,” Villanueva said. “In fact, we’re more than thrilled.”

But it’s a sign of the county’s appetite for keeping its sheriffs’ feet on fire in the event of a use of force.