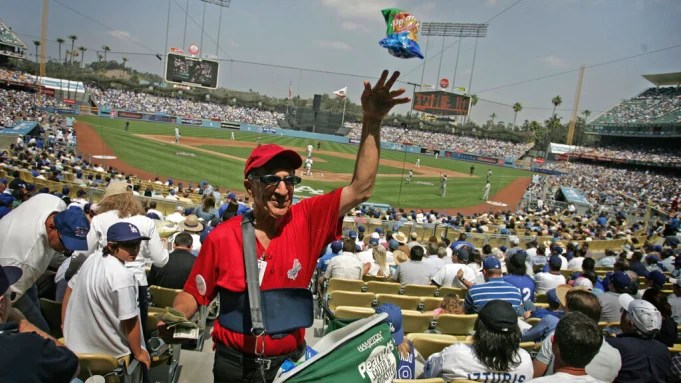 The Los Angeles Dodgers don’t tell you “Nuts.” They just want peanut-loving fans to be safe when they get their goobers, or so they claim.

Salesman Roger Owens, known for his knack for throwing peanuts at fans at games, has now been banned by his employer, Levy Restaurants, from throwing the bags at fans, according to Deadline.

Owens told the Los Angeles Times that Levy Restaurants cited fan safety as the reason for the ban.

Owens, who throws peanuts, is not just any salesman. He once appeared on Johnny Carson Tonight’s show to demonstrate their skills. He has been a salesman since 1962 at the Stadium and is as much a part of the show as of what is happening on the pitch.

Still, he doesn’t dispute the decision, saying he doesn’t want to “fight” with Levy.

“It’s not a bullet that goes straight through. I always want to make sure whoever I throw to gets the bag of peanuts. I want them to grab it, because they feel a sense of accomplishment.

The art of throwing peanuts began about 60 years ago, Owen said, when a fan sitting at the back of a row asked for a bag.

“I went behind the back, he wrapped around all these people in the aisle and came right into his hand and everyone started clapping,” Owens told an ESPN “SportsCenter” reporter.

“And I was a little surprised. So I went home and started training with an invisible man on the couch.

There is hope that Owens will make a comeback. The stadium instituted peanut-throwing bans in 1976 and 1985, rescinding the policies when the outcry escalated.