Premier League giants Liverpool and Manchester United are in the running to sign TSG Hoffenheim playmaker Christoph Baumgartner this summer.

According to a report by SportBild (h/t Sport Witness), Christoph Baumgartner faces an uncertain future at TSG Hoffenheim. The player is eyeing a potential exit from Sinsheim at the end of the season amid interest from Premier League giants Manchester United and Liverpool.

The report suggests that English clubs are seriously considering signing the young playmaker next summer. But they may have to meet his release clause which stands at around €30m. Due to the clause, Hoffenheim will be powerless to prevent the player from leaving the club, although the midfielder has a contract until 2025.

Formerly from St. Polten in his native Austria, Baumgartner has been one of the rising stars for the Hoffenheim side over the past two years. Since his professional debut in the 2019/20 campaign, the youngster has been crucial to the club’s creative department, racking up 22 goals and 14 assists in 100 competitive appearances.

Although an attacking midfielder by trade, Baumgartner impressed with his creativity and attacking versatility. As well as his preferred number ten role, he can operate wide and has the technical prowess and game awareness to create clear goalscoring opportunities for his team. 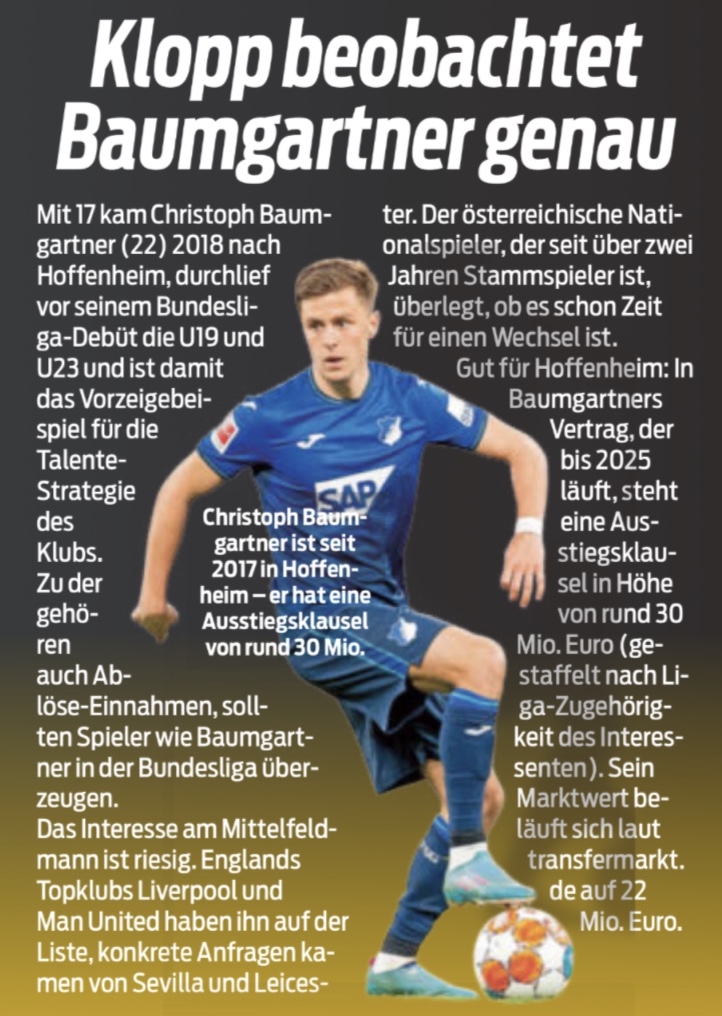 The 22-year-old’s impressive performances have helped him become an integral part of the Austrian outfit, now coached by Manchester United’s Ralf Rangnick. One would assume the German tactician is now hoping to use that connection to possibly lure the Hoffenheim starlet to Old Trafford this summer.

The Red Devils are on the hunt for a new playmaker this summer as they seek to part ways with several of the team’s star players, including Juan Mata, Jesse Lingard and Paul Pogba, who has recently been linked with a shock transfer to Newcastle United.

Another club in the running to sign Baumgartner is Liverpool. The Reds need to add more depth to the midfield unit next season, with question marks over Alex Oxlade-Chamberlain’s future. Moreover, Jurgen Klopp’s side lack the services of a creative-minded midfielder.

Baumgartner fits the bill nicely. He offers significant experience at the highest level of football and his versatility could open up multiple tactical possibilities for Klopp. He could be a direct upgrade on Oxlade-Chamberlain and for a fee of just €30m Baumgartner could be a bargain this summer.