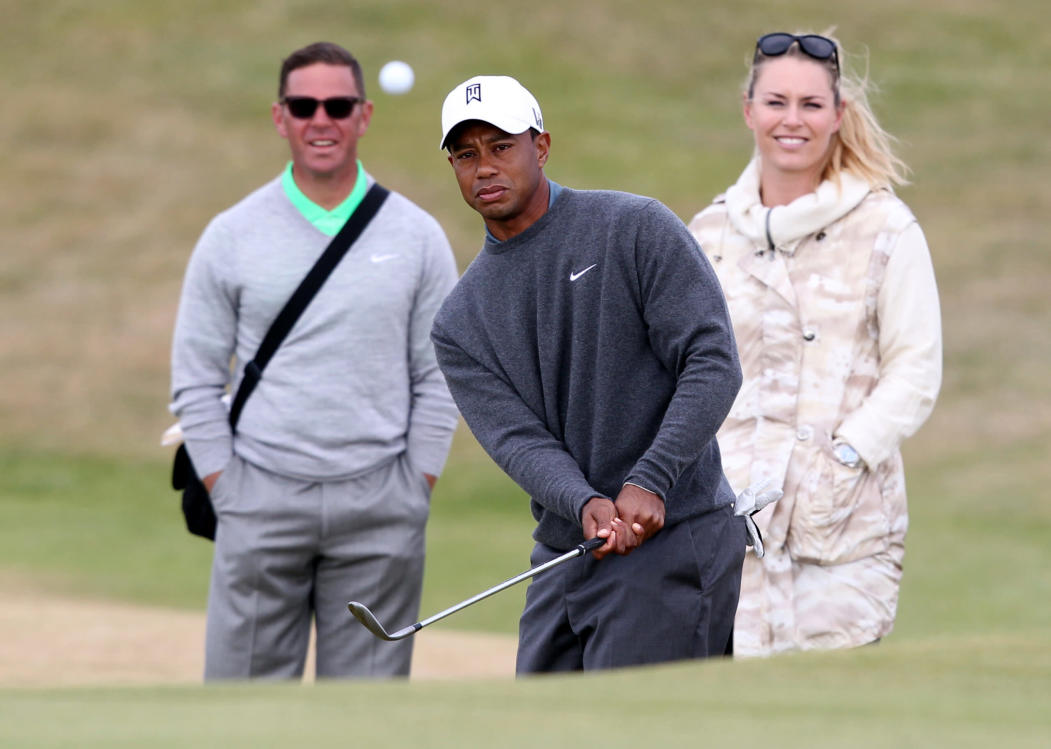 Lindsey Vonn recently returned from a European vacation, skiing in France with some family members and friends.

She said it was the first ski vacation she had since she was 9 years old.

“It’s a very different experience now,” the Olympic gold medalist said Monday. “I like going slow — I mean, maybe not as slow as I should.”

Nearly three years into her retirement, Vonn, 37, said she remains as competitive as ever — giving friends a head start on the mountain, for example, and racing to catch them. She will not participate in the 2022 Winter Olympics in Beijing, the first Games since a series of injuries ended her professional career. But she said she has enjoyed the new phase of her relationship with the sport.

“I think in a lot of ways it made it easier that my decision was made for me, in the sense that my body was really telling me it was enough,” Vonn said. “I think it would be really hard for me to quit alone because I love it so much.”

Tiger Woods and Lindsey Vonn were in a relationship for almost three years.

‘Happy’ for Tiger’s time with his kids

As for her relationship with Tiger Woods, with whom she had a romantic relationship for nearly three years, she said the two have remained on good terms since the split in 2015. At the time, the breakup was considered amicable and Vonn wrote, “I will always cherish the memories we made together, unfortunately we both lead incredibly hectic lives that force us to spend much of our time apart.”

She then added that she would “always admire and respect Tiger. He and his beautiful family will always hold a special place in my heart.”

On her current book tour, she said the two are still friendly, and she was happy to see him spend time with his kids, including his recent appearance at the PNC Championship with his son, Charlie, especially in light of his near-death car. accident in 2021.

“We’re friends and of course I’m glad he’s back and healthy,” Vonn said in an interview with Entertainment Tonight. “And you know, it was a difficult time for him. So I’m just glad he’s back with his kids.”

Vonn was previously married to Olympic skier Thomas Vonn for four years before dating Woods. She also separated from hockey player PK Subban in December 2020 after a relationship of 3 years.

Vonn, one of the most decorated American skiers in history, competed in four Winter Games and was arguably the face of Team USA at one point. She won three Olympic medals in her career, including gold in the downhill in Vancouver, in addition to 82 victories in World Cup races. She retired in February 2019 after winning bronze in downhill at the world championships.

Vonn said she was “obviously sad” and “a little outraged” in the immediate aftermath of her retirement. She wanted to continue racing and said she would have tried to compete in Beijing if her body had held up. But over time, she’s both worked through those feelings and tried to spend time appreciating what she’s accomplished in her career. Working on her new memoir, “Rise,” has helped.

“I think overall it was very therapeutic,” Vonn said. “Life is completely different once I’m retired. So I think it was an important time for me to be able to look back and remember my journey, appreciate my journey and be proud of where I am now.

“I think when you’re in the moment, sometimes you lose perspective of how hard you’ve worked and how far you’ve come. And I definitely think, again, that I had a different perspective after being retired for a while.

In the book, released Tuesday, Vonn takes readers through her early days in the sport — she and her father began plotting her way to the Olympics when she was 9 — and her feelings at key moments along the way. For example, she writes about feeling overlooked and insecure as a teenage skier, and about the decision to use men’s skis midway through her career.

Vonn also writes extensively about her battle with depression, which she has managed to accomplish throughout her career, partly with medication. She credits a new therapist who has helped her work through retirement, which she describes as “harder than all my injuries, harder than anything I’ve done.”

“I’ve gone through the spectrum, from noticing that I didn’t need a therapist, to having a hard time opening up to someone, to where I am today,” Vonn writes in the book. “Eventually I came to realize that you don’t just wake up one day and find that all your problems are gone. No one can do everything alone, not even someone as independent and stubborn as I am.”

While it may feel a little odd, Vonn said she’s looking forward to just being a “regular spectator” for the upcoming Winter Olympics, which kick off on Feb. 4. It will help that the first Games will be held in China after her retirement, at a location where she has never raced before.

“I think if it was somewhere else, I’d always be like, ‘Well, I could have skied that section better’, or maybe I would have liked to ski there more,” she said. “Because it’s a new venue, because I’m retired, I think I can watch these Olympics and just be excited for my teammates.”