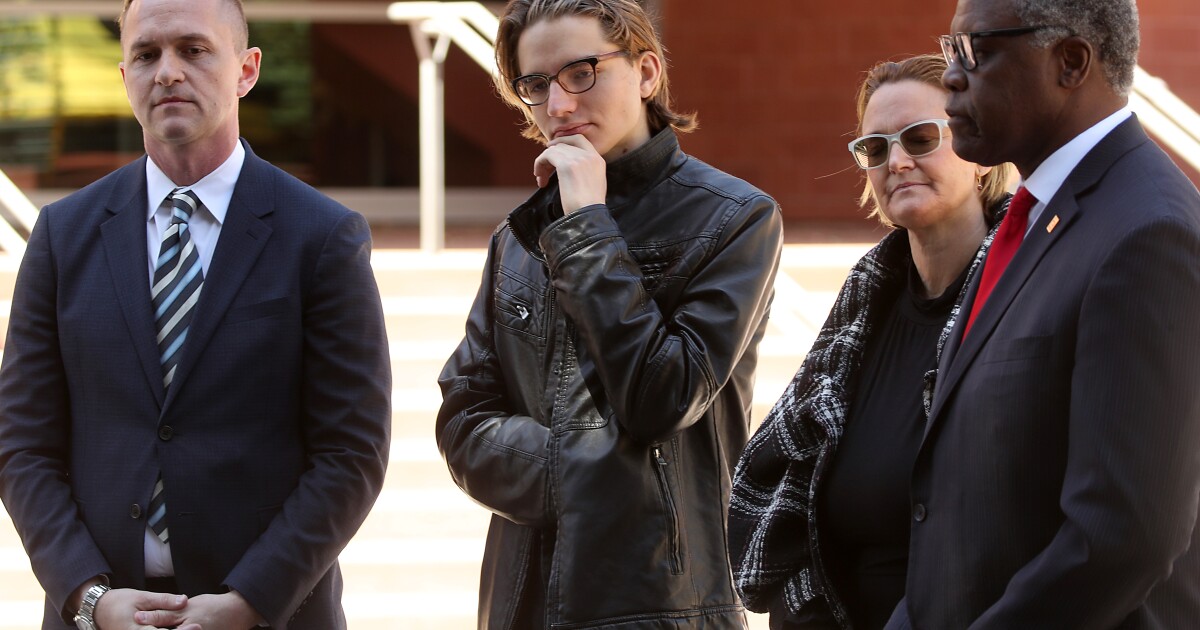 It is a dilemma often faced by debate organizers — where to draw the line between “major” and “minor” candidates.

Is it polls, fundraising, political resume or some other “it” factor that determines who will square off onstage?

On Tuesday, four candidates for LA mayor demanded to be included in a May 1 debate organized by Cal State Los Angeles and the League of Women Voters of Greater Los Angeles.

So why were City Councilman Joe Buscaino and City Atty. Mike Feuer deserving of invitations and not others who had also fared dismissally in the poll by the UC Berkeley Institute of Governmental Studies, co-sponsored by the Los Angeles Times?

The poll showed that 39% of likely voters remained undecided.

“Voters don’t even know they’re entitled to options beyond the small group of insiders,” Gina Viola, a mayoral candidate who is calling for the city to redirect its police budget to social programs, said at a news conference Tuesday. “I’m at least as serving of the opportunity to be heard.”

Raphael Sonenshein, a debate organizer who is executive director of the Pat Brown Institute for Public Affairs at Cal State LA, acknowledged that the invitations are a “judgment call” but said that room on the stage was limited because of a 90-minute time limit .

“When you put them all together, you can get a fairly good perception of who are the main candidates who need to be on the stage,” he said.

He said organizers are evaluating the recent UC Berkeley poll to see whether any lineup changes are needed.

The debate, which will be held at Cal State LA and air on KABC-TV Channel 7, is one of the last major events for the candidates to make their case before mail-in ballots go out for the June 7 primary.

Viola and others at Tuesday’s news conference at Cal State LA demanded that all 12 candidates who have qualified for the ballot should take part in the debate.

Limiting the field to five candidates amounts to “voter suppression” and restricts the range of ideas heard by the city’s voters, they said.

Bass, Caruso, De León, Buscaino and Feuer were all invited to past televised debates, including one held in mid-March at USC and co-sponsored by The Times, while the other candidates were mostly shut out.

Inviting more candidates to debate onstage could “force accountability,” said Craig Greiwe, a marketing executive who said he is running for mayor as a centrist, advocating for child-care vouchers and for addressing climate change with market incentives.

Taking part in a debate and getting his name out there is crucial to unlocking the city’s 6-to-1 matching funds for campaigns, said Alex Gruenenfelder, a 20-year-old Echo Park Neighborhood Council representative whose mayoral platform includes buying abandoned malls and converting them into affordable housing.

Candidates must either participate in a debate or conduct a town hall meeting to receive the city matching funds.

Mel Wilson, a San Fernando Valley real estate agent and former Metropolitan Transportation Authority board member, said he would use the debate stage to bring up a topic rarely raised by other candidates — climate change.