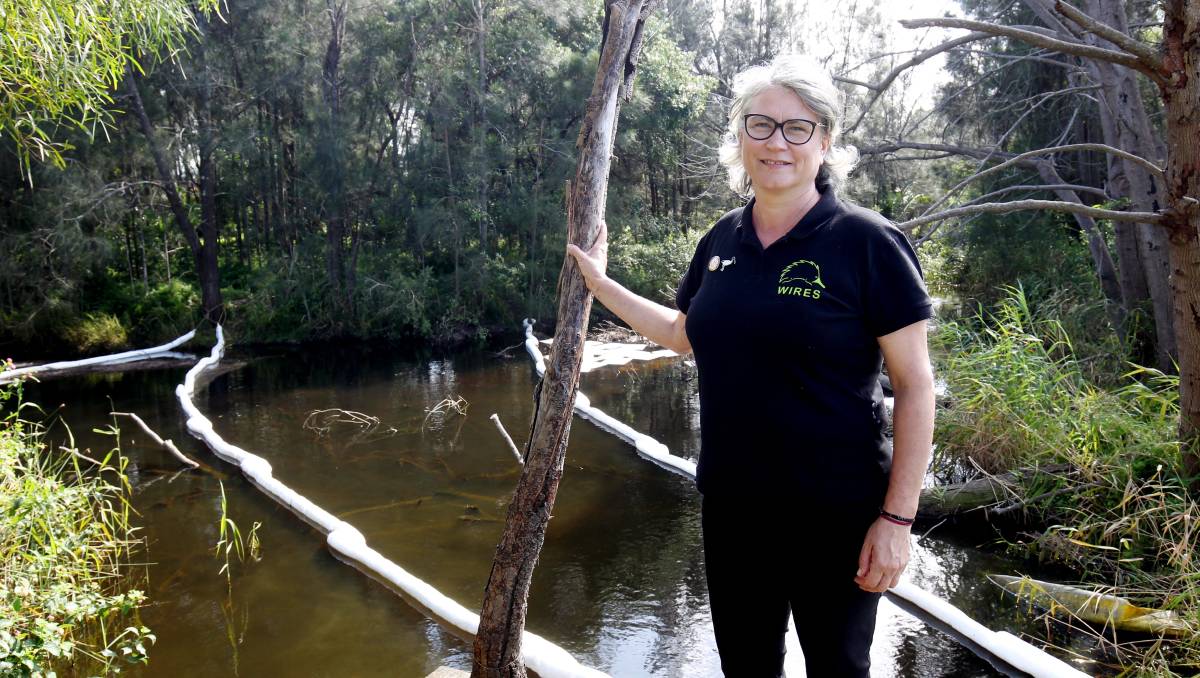 The effects of a fuel discharge spill at Kurnell on natural habitats may be felt for weeks, as animal rescuers urge the community to be on the lookout for injured wildlife.

As the Environment Protection Authority considers taking regulatory action against Ampol following a wastewater treatment plant overflow on April 8, there is growing concern for native bird and marine life in the wetlands and surrounding waterways.

WIRES volunteer Toni Burnham, of Maianbar, was among the first on the ground to help spot any species affected by the oily slick.

“I’ve been a WIRES volunteer for about 11 years and this is not an event I’ve seen before,” she said. “These wetlands are vast. We spent about three hours trudging around on the Friday morning. The water in the area where it happened appears quite stagnant. From the creek to the marshland, it’s not moving.”

This is not an event I’ve seen before.

She said the marshlands were a haven for several species of native animals.

“We were looking for anything that was immediately affected. An Eastern Longneck turtle covered oil was brought in. There were some young chicks, Dusky Moorhens, who would have still been with their parents, that were badly affected,” Ms Burnham said. “The little birds can’t fly so the parents made a choice to leave them, which was a terrible shame. One of the chicks that didn’t make it was sent to Taronga Zoo for a necropsy.”

A Dusky Moorhen picked up by WIRES. Picture: Supplied

She said the biggest concern was animals swallowing the slick.

“The main issue is ingesting the pollutants,” she said. “The other concern is the feathers being affected. They are an important part of birdlife and have the ability to be waterproof so birds don’t get cold. Birds have a natural instinct to preen their feathers but if they have been contaminated, they are ingesting pollutants again. They have already been saturated because of all the stormy weather we’ve had.”

One week after the incident, many affected animals had already moved away from the site, she said.

“I found a little Cormorant at Greenhills, which was nowhere near the area,” she said. “There wasn’t a lot of oil on it but it went to the vet and it’s doing well. You can’t save everything but you can give some a second chance.”

Most affected animals may not appear in clear distress. “The effects also may not be so obvious,” Ms Burnham said. “Some animals may simply look lethargic or be sitting down for a long time, or they could be excessively preening. People should be vigilant all over the Shire and in Botany. A lot of birds will travel some distance.”

Migratory birds including the Eastern Curlew, which is a shore bird, and vulnerable species including the Pied Oyster Catcher may also be threatened, she said.

“Most are on the move, but some remain including the Whimbrel, Bar-Tailed Godwit, Ruddy Turnstone and Red-Necked Stint,” Ms Burnham said.

“Because the weather has been crazy lately, the winds have brought some birds like the Gannots in on the sand, but they would usually only land to nest.”

Despite residents saying Ampol was slow to act, Ms Burnham praised the company’s efforts in responding to WIRES.

“They were keen to get us down there quickly to help identify worst hit areas,” she said. “What we saw were heaps of people trying to contain the problem. It was good to see their genuine concern.

“But I would like to think that they have been somewhat educated through this. They are an important company in that area and they have a footprint so this will hopefully improve communication between us.”

NSW National Parks and Wildlife Service worked with other response and recovery agencies including the EPA, The Port Authority of NSW, Transport for NSW Maritime, Fire and Rescue NSW, Emergency Services and Department of Primary Industries Fisheries on the clean-up.

A spokesperson for national parks said a “small number of birds and reptiles” were “possibly impacted”, but it would continue to monitor the situation.

“The recent unprecedented rains have also resulted in an increase in calls from the public finding wildlife seeking shelter in and around their homes,” she said.