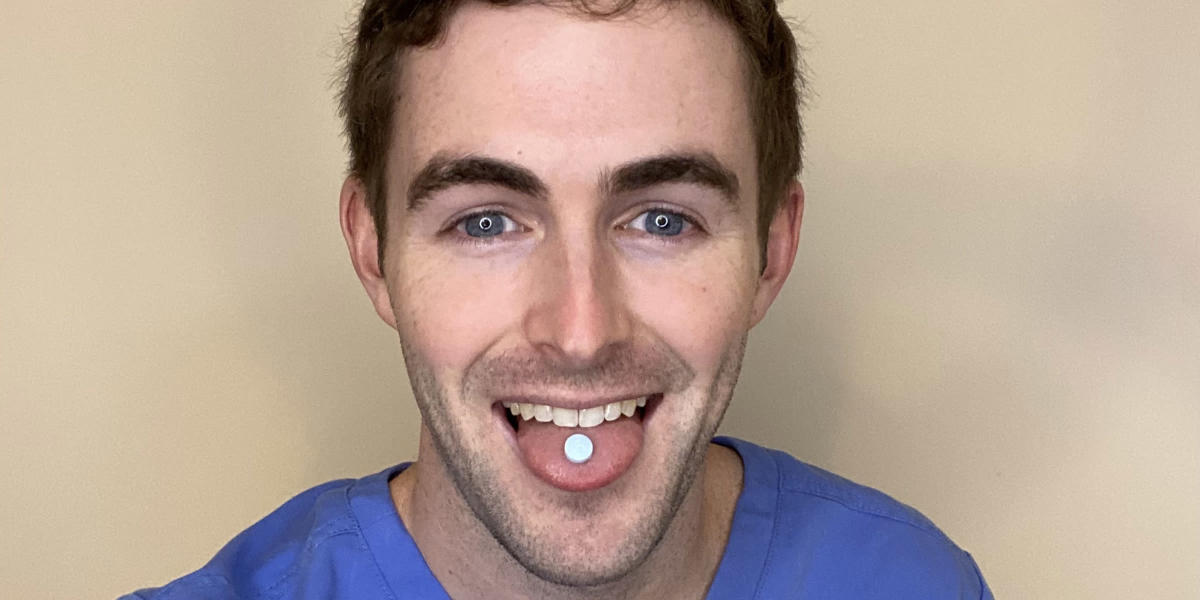 dr. Wearing blue scrubs, Jake Goodman balanced a pill on his tongue and took a selfie that he knew could affect his career.

The recently graduated doctor, who is training to be a psychiatrist, decided to be candid about his own mental health and revealed that he is on medication to feel better.

Goodman posted the photo to Instagram last month and received thousands of likes and hundreds of comments.

“Many of us will never take drugs that can help correct the chemical imbalance in our brains because of the stigma on medication, the fear that taking drugs for our mental health somehow makes us weak. This stigma is widespread in the medical field,” he wrote in the caption.

“My name is Dr. Jake, I am a doctor who treats mental illness, and I take medication for my mental health. And by the way, I’m proud of it,” he wrote.

Goodman, who lives in Miami, said he always wanted to be a doctor growing up, seeing doctors as superheroes unaffected by stress or mental health issues. He never saw doctors being candid about the struggles they were going through.

Now entering his four-year hospital stay in Florida, Goodman said he was concerned about a culture in medicine, especially in medical school, that expects doctors to keep their mental health issues to themselves.

He declined to name the medication he’s taking, but was happy to report that he’d been dealing with depression for several months, including symptoms like numbness, a burnt-out feeling, and not being himself; experiencing a loss of interest in things he normally enjoyed doing and having trouble sleeping.

Medication and therapy have helped Goodman feel significantly better — it’s like “night and day,” he said. He’s also an advocate for practicing self-care, including exercise, “one of the best things you can do for your mental health, period. It releases natural endorphins and allows you to break free from everyday stress.” of life,” he said.

Studies show that 27% of medical students and nearly 29% of primary care physicians have symptoms of depression. A survey of more than 2,000 female doctors found that half of them believed they met criteria for mental illness but had not sought treatment because of “significant and persistent fear” of the stigma.

“There’s just a general fear that other doctors or other health care professionals or our employers will see us as weak or damaged or unable to treat patients,” Goodman said.

“Doctors are supposed to be these super strong, superhuman people who work long hours and are unaffected by the stress.”

Doctors also fear they won’t get their medical license in states that require them to disclose whether they’ve ever received treatment for a mental illness, he noted. Nearly 40% of doctors reported being reluctant to seek help because of such concerns, a survey found.

That’s why Goodman hesitated for weeks about posting that photo of himself, but decided it was worth breaking the stigma.

Right around the time Goodman was dealing with depression, he was also diagnosed with melanoma. He has a family history of skin cancer and decided to have a skin check as it had been a while since his last visit to a dermatologist.

The cancerous spot was on his scalp above his left ear and covered in hair, so Goodman had never seen it himself.

“Who knows how long it had been growing there, but when they showed me the picture of it, I would have gone straight to the doctor if I had seen that anywhere else on my body,” he recalls.

“The scalp is one area that you need to check with your dermatologist because if they didn’t check that, I’d still have melanoma on my scalp.”

The site was surgically removed in November. It was melanoma in situ, the earliest stage, so Goodman was lucky to have it discovered early. He now ventures outside, covered in sunscreen and wearing a large sun hat.

“It’s character building and it taught me that we’ve all had some kind of situation in our lives where you discover something that turns your world upside down, shakes beliefs and humiliates you,” he said of his ordeal.

“Being blessed and happy to be alive and able to do the things I want to do and live my dreams, that’s an amazing thing. I think it has given me a new outlook on life.”