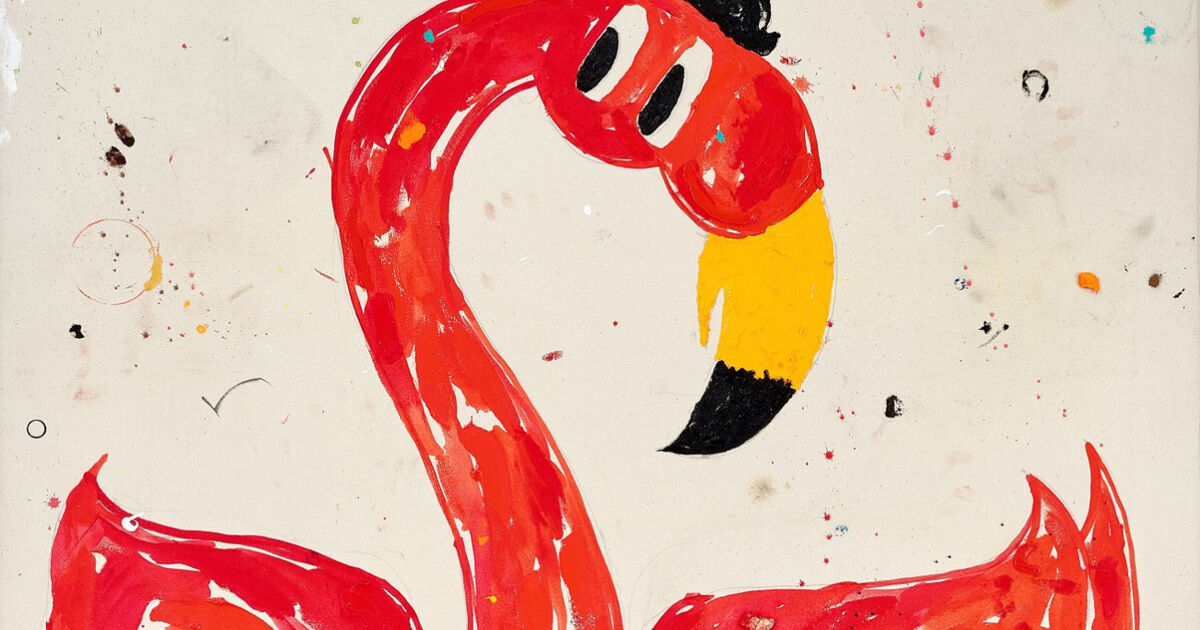 Szabolcs Bozo’s Pyro Flamingos (2021) is a playful acrylic painting of a flamingo wearing a top hat with exaggerated eyes gazing shyly at the audience. The towering six-and-a-half-foot-tall piece sold for HK$1.008 million (US$128,433) – more than double its high estimate of HK$500,000 (US$63,692) – during the auction Sotheby’s “Contemporary Curated” in Hong Kong last month, the second most expensive auction of a work by the emerging artist.

Born in Pécs, Hungary in 1992, London-based Bozós has been a sensation in both primary and secondary markets, with his lively figurative paintings attracting strong interest from emerging and established collectors over the past two years. Impressive in both size and color, Bozós’ work evokes the vivid shapes and creatures featured in cartoons and children’s books, especially those in the Hungarian nursery rhymes read to him in his youth.

While Bozós’ work is certainly cheerful in nature, citing Hungarian nursery rhymes and animation, it references a bleak history of political contestation through that nation’s past. Curiously, the children’s programming produced by Budapest Animation Studios serves as a fascinating political archive in which shows and films captured national anxiety during and after communist rule. These are reflected in Bozós’ work by cute animal creatures with mischievous smiles that suggest to the audience that these sweet scenes are not what they seem.

For Bozó, the bright graphic style is a way to grab the audience’s attention and draw them into an intricate, fantastical landscape of creatures inspired by the nursery rhymes and dark humor of his youth. With the current sale of Sotheby’s, it is not difficult to foresee that Bozó’s successes with Asian and European markets and institutions will be replicated in the United States.