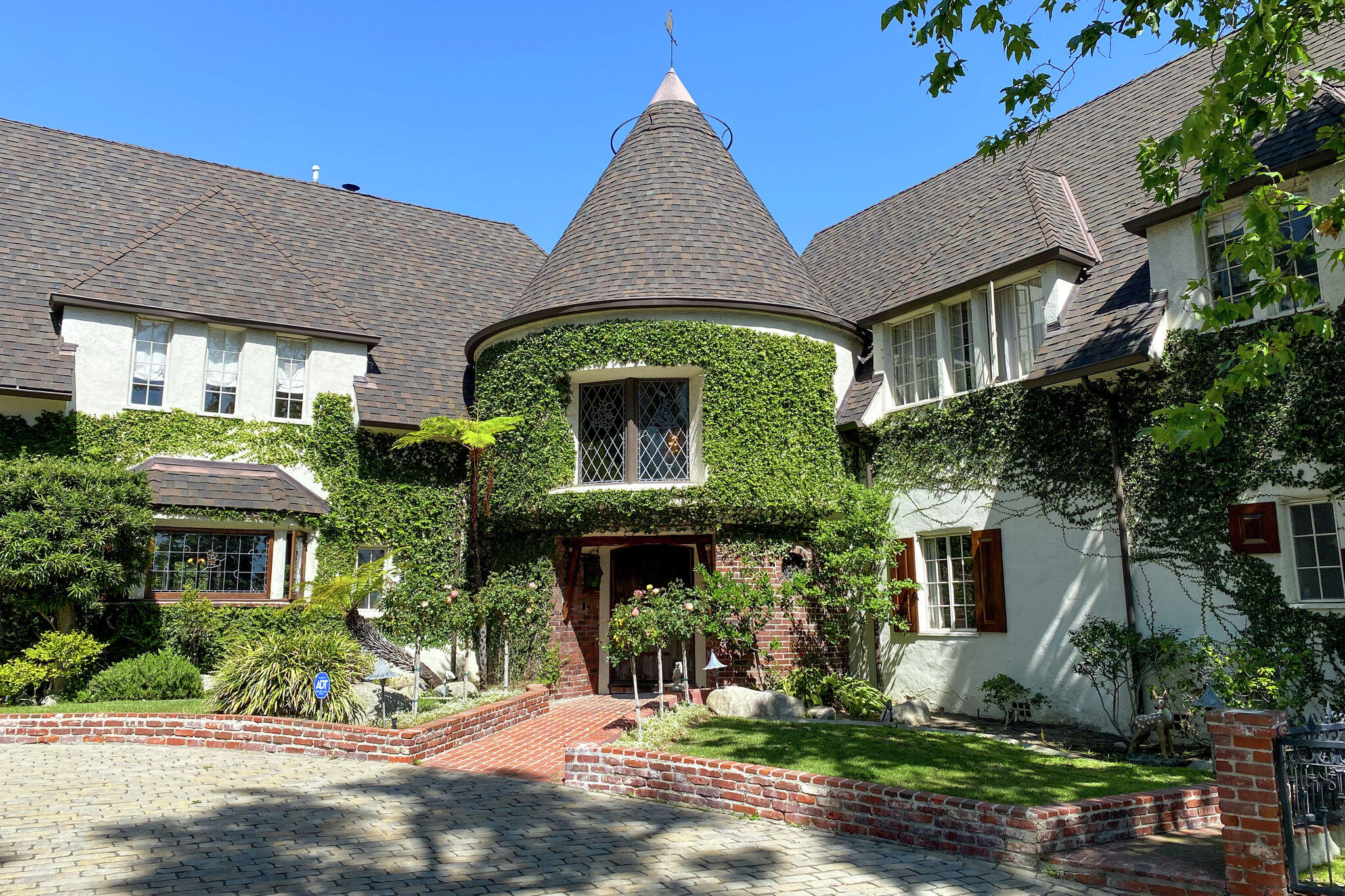 Driving up Woking Way, a small, winding road between Los Feliz Boulevard and Griffith Park, you wouldn’t know it was any different from the other million-dollar homes that surround it. This is because, from the street, all you see is a towering gate and a steep driveway.

At the top is where the magic is. At the top is Walt Disney’s house, the house Mickey built, part storybook cottage, part luxury mansion, all out of Hollywood fairy tale.

“Walt Disney’s Storybook Mansion”, as it is known by connoisseurs, is a private residence. Once a month it opens for guided tours, led by Dusty Sage, a Disney expert who runs the Disney MiceChat blog and was instrumental in saving and restoring Walt Disney’s birthplace to Chicago.

“There is something special about the house,” he said. “I always like to think that I feel the spirit of Walt Disney when I’m here. Is it just me thinking like that or if it’s actually his spirit, I don’t know. But I Got goosebumps in this house. No matter how many times I’m here, I feel the vibe of this place and it speaks to me.

The house is all enchanting: white plaster and dark red brick, with dark wood shingles and stained glass. The front door is set in a central tower topped by a weather vane, and the driveway leading to it is lined with rose bushes in two colors of roses: yellow for Walt and pink for his wife Lillian, who was an avid gardener.

The couple built the house in 1932, took in their daughters Diane and Sharon, and lived there until 1950.

“Most people come here and they immediately think of ‘Snow White and the Seven Dwarfs,'” Sage said, assuming the house was inspired and built with profits from that movie. “But it’s really the other way around. This house was built in 1932, ‘Snow White’ didn’t come out until 1937, and they hadn’t even started working on that movie yet. This house was just a style that Walt Disney liked.

It’s also the same storybook cottage style as Walt’s favorite restaurant, the nearby Tam O’Shanter, which was built in 1922 and was the daily lunch spot for Disney and his entourage. To this day, Table 31 still bears a plaque marking Disney’s favorite spot in the restaurant.

Learning Disney history is a bit like falling down an Alice in Wonderland-style rabbit hole. There’s so much fascinating insight into how Walt Disney’s vision shaped pop culture and defined what we consider high-end entertainment today. There are also disturbing tales of misogyny and anti-Semitism. But the tour, as you might expect, focused on the good times, and during that hour I was happy to do that as well.

The house is where the Disney girls grew up, and there are touches everywhere indicating what a family-first home it was. At the top of the circular spiral staircase there is a landing which connects the master bedroom to the girls’ bedrooms, with a Juliette balcony in between. But rather than calling the space by its architectural name, in the Disney home it was “Christmas Tree Point.”

“On Christmas morning, the two Disney girls would run to that balcony to see if Santa Claus had brought them any presents,” Sage said. “Every Christmas, the tree was placed right in front of this big window, with all the presents for the girls around it.”

In 1937, in its enthusiasm for the release of “Snow White and the Seven Dwarfs”, its first feature film, Disney brought in studio staff overnight and built the girls’ present in the backyard. . When they woke up on Christmas morning, a Snow White-style story house was waiting for them outside.

The chalet still stands in the courtyard, although a swimming pool has been added nearby. (The original Disney pool was on part of the land that has since been sold.) the girls and tell them it was time to come in,” Sage explained. “That Christmas morning after the girls had finished unwrapping their last present, Walt said, ‘Do you hear anything ringing?’ And the girls looked around and heard the ringing was coming from that strange cottage.

“They ran inside the seven dwarfs cottage to answer the phone and it was Santa,” Sage added. “He wanted to know if they liked their new little house.”

Zillow’s “Zestimate” is that the four-bedroom, five-bathroom Disney home is worth around $8 million, but like most man-and-mouse artifacts, the cultural value is difficult to estimate. After all, when a postcard bearing one of Walt Disney’s earliest signatures – that is, an old piece of paper – was auctioned off in 2020, it fetched $40,000.

Because Disney began construction in the middle of the Great Depression, many skilled workers were available and eager to work. Supplies were cheap, and what would have taken much longer and cost more under other circumstances took only 10 weeks to build and cost $50,000 (about $1 million today, adjusted for inflation, although just a few months ago it probably would have been more like $750,000).

At any one time, 50 to 100 people were working on the house, building the circular staircase in the lobby, inlaying stained glass in the windows, hand-painting intricate murals on the ceilings.

“It was Hollywood style at the time,” Sage said. “If you could build a house that size in those days, you were someone. But the secret is that Walt really wasn’t. He hadn’t even made his first feature film yet.

“But two years before he moved here, he made up a little guy named Mickey Mouse,” he continued, “animated in the garage of the house just down the street on Lyric Avenue.” And the profits from those shorts had started to come in.

The house on Woking Way is now owned by director Timur Bekmambetov, who is best known for films like ‘Abraham Lincoln: Vampire Hunter’ and ‘Wanted’. The Disneys left home in 1950, decamping to a larger home in Holmby Hills (near Beverly Hills) that had room for Lillian to garden and Walt to build a model train in the yard.

The owners between the Disneys and Bekmambetov, who bought the house in 2011, did not have historic preservation in mind and made many updates to modernize the interior of the house. Bekmambetov, however, worked to restore the house to what it would have looked like in Disney days, adding period furniture and filling the house with his own collection of original Disney artwork.

Ticket sales for the tours are donated to Friends of Woking Way, a non-profit group responsible for the preservation and restoration of the house.

Bekmambetov “spent a lot of money restoring the house to what it would have looked like when Walt Disney lived here, and then put his entire collection on the walls,” Sage said. “Walt Disney wouldn’t have had his own artwork on the walls. He worked with it all day. He didn’t need to see it when he got home.

“The rest of the house would have just been [decorated with] the art they collected on their travels and gifted to them by their many artist friends,” he added. Rather than spending evenings out, Walt and Lillian preferred to invite friends over to their house or spend their evenings with family. Spencer and Louise Tracy were close Disney friends and spent a lot of time in Woking Way.

Disney was first and foremost a family man. He drove his daughters to school every morning, Sage said, and the same spirit of hospitality extended to the girls’ school friends. While the family lived in the house, Walt Disney Studios released films like “Snow White and the Seven Dwarfs,” “Dumbo,” and “Pinocchio.” The girls would often have friends over to screen these movies in the family’s screening room, which during the day was a place where Walt could watch current movie dailies, and at night was the family’s private cinema.

“The Disney could not have [go to the movies] because everyone would have wanted Walt’s autograph or shake his hand or introduce their kids to him,” Sage explained. “Walt didn’t want to subject his little girls to this – so they would sit here in this room and watch whatever they wanted because he was Walt Disney.”

Diane and Sharon, he added, “could bring their friends from school to their house, watch any movie they want, and introduce their friends to the man who invented Mickey Mouse.”

New visits are announced by e-mail. Register via the online form.