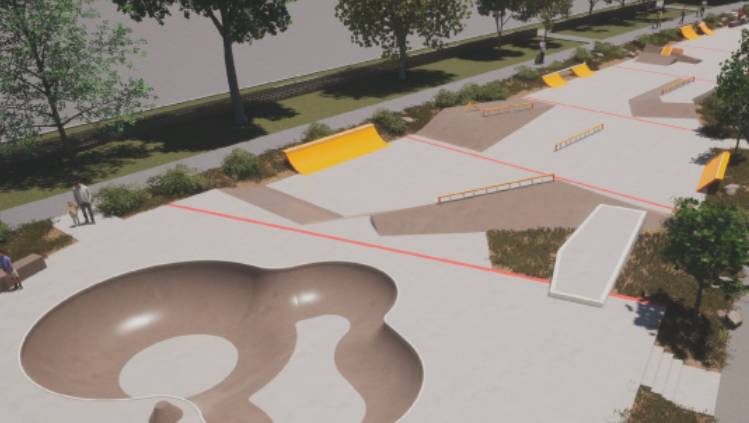 The concepts have been prepared in conjunction with top skatepark designer Convic.

The plans follow consultation undertaken in December and January and can be viewed on the Georges River Council website.

The flowy street design is a mixed transition and street layout consisting of unique concrete and steel obstacles arranged in a linear run.

Paying homage to the history of the existing Olds Park Skatepark, steel ramps have been incorporated to offer unique contemporary riding elements. Key features include a flow style bowl, hipped banks and rails, kicker to kicker and fundamental transition obstacles.

The street plaza design is a contemporary plaza facility consisting of features found in the urban environment. Steel grates have been laid across the site to creates gaps between riding elements. The layout has open spacing between elements allowing clear movement between obstacles for plaza flow and real street feeling. Key features include a mini ramp style bowl, down rails, planter ledges, down gaps and fundamental street obstacles.

These initial concept designs are indicative only and subject to further development and final costs.

The council is seeking community feedback to assist in forming a final concept design that will be released later this year.

While the plans have been presented as two quite different options, the final plan may, subject to community input, be a combination of both options.

The concept designs have been created to represent the surrounding sporting precinct context of Olds Park and reflect the history of the existing skatepark.

The community feedback will be used in updating the design to a highly resolved and informed design outcome that is unique to this site and the Georges River Council area.

A hard copy version of the survey from this page.

If you are returning a hard copy survey, please quote SF21/4431 Public Submission -Olds Park Skatepark Concept Design at the beginning of your submission and return: