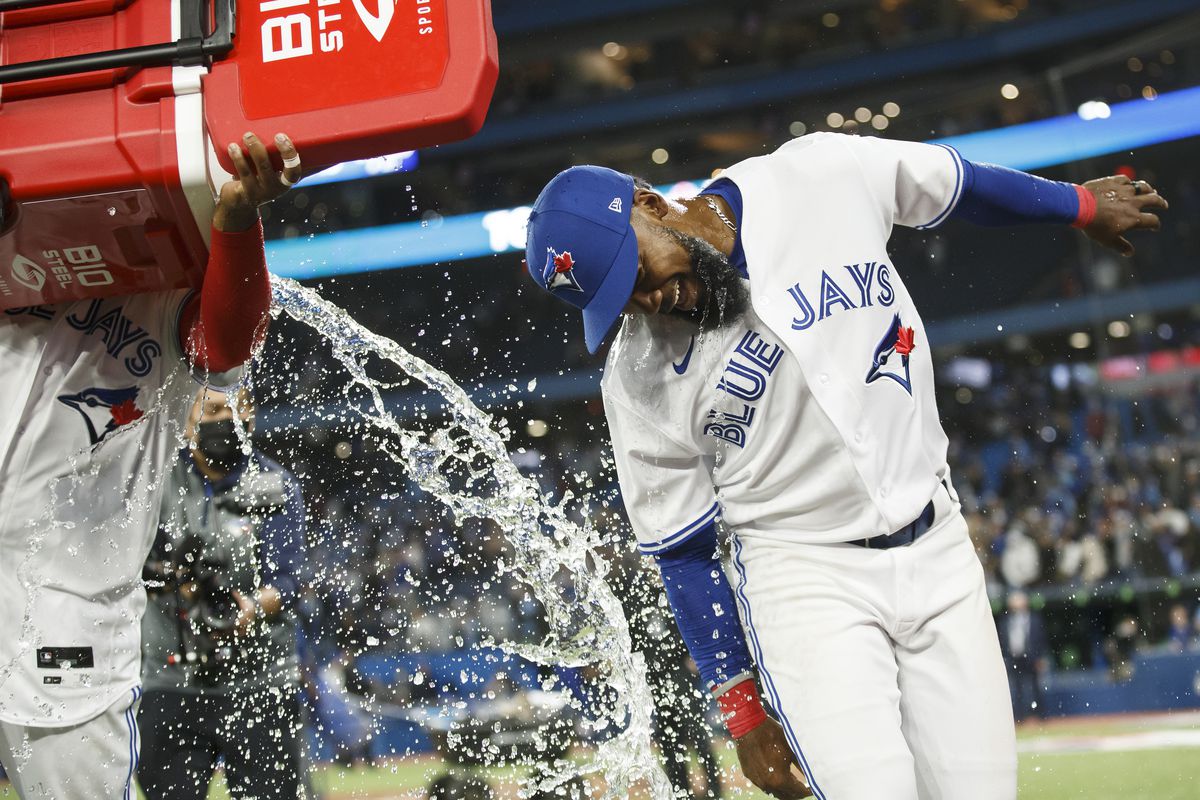 Teoscar Hernandez had a three-run blast and scored the game-winning run as the Toronto Blue Jays rallied for a raucous 10-8 win over the Texas Rangers on Friday.

Danny Jansen added some insurance with an eighth-inning homer as Toronto (1-0) won its home opener.

It was the first time the Blue Jays had hosted a home opener at Rogers Center since 2019 because of the COVID-19 pandemic.

Jose Berrios gave up four runs in just a third of an inning as Toronto’s Opening Day starter escaped with a no decision.

Seven relievers came out of the Blue Jays’ bullpen, with Adam Cimber recording the win and Jordan Romano of nearby Markham, Ont., earning the save.

Jon Gray struck out four but allowed three runs over four innings for the Rangers. Dennis Santana, one of four Texas relievers, took the loss.

It was the Blue Jays’ first home opener since 2019, as COVID-19 restrictions forced the club to play all of the 2020 season and most of 2021 in Dunedin, Fla., and Buffalo, NY When the team did return to Toronto late last summer Ontario still had capacity limits in place for most venues, limiting the cavernous Rogers Center to just 15,000 fans.

“It’s something that most of us have been thinking about since we got here,” Bichette said on Thursday. “So it’s my fourth year, first one, and couldn’t be more excited.”

Bichette’s cohort got the full experience on Friday with a crowd of 45,022 at Rogers Centre, the first sellout at Toronto’s ballpark since March 29, 2018.

A lengthy pre-game ceremony kept the crowd on its feet for more than 35 minutes. Guerrero, Hernandez, and Marcus Semien – who signed with Texas in the off-season after playing for the Blue Jays last year – formally received their Silver Slugger awards.

Guerrero earned the loudest cheers, including MVP chants, as he trotted out from the dugout during team introductions.

Miller, hitting leadoff for Texas, immediately quieted the Rogers Center crowd when he bounced a 1-2 pitch from Berrios off the stadium’s second deck.

Berrios’s struggles didn’t end there, with a wild pitch to Mitch Garver scoring Semien. Nathaniel Lowe singled in the next at-bat to push Corey Seager across home for a 3-0 Rangers lead.

Berrios managed his first out of the game six batters deep, getting Garcia to hit into a fielder’s choice. He then hit Kole Calhoun with a pitch to load the bases.

With Berrios struggling to get out of the inning, Blue Jays manager Charlie Montoyo pulled him in favor of Saucedo.

The Toronto reliever got Andy Ibanez to ground into a force out at second base but Garver scored on the play before Willie Calhoun popped out to end the inning.

Saucedo got two quick outs to start the second inning but Seager doubled off the outfield wall and then Garver sailed a pitch into the second deck to give Texas a 6-0 lead.

The Rangers added to their lead in the fourth inning when Lowe’s single to deep left scored Seager from second.

Guerrero answered back for the Blue Jays in the fourth. His single brought home George Springer and advanced Bichette to second. Hernandez then walked to load the bases and brought Lourdes Gurriel Jr., up to the plate.

The top of Toronto’s batting order kept chipping away in the fifth.

Springer drew a two-out walk before Bichette and Guerrero had back-to-back singles to score another run. Hernandez then smashed a pitch just over the right-field fence to tie the game 7-7.

Santiago Espinal, pinch hitting for Biggio, gave Toronto its first lead of the game with a two-out double in the sixth, cashing in Jansen.

That Blue Jays lead didn’t last long though as Garcia tied it back up for Texas in the seventh inning with a home run to right field.

A controversial play in the bottom of that inning put Toronto back ahead.

Hernandez was called out by home plate umpire Bill Welke when Gurriel doubled to deep left and advanced to third on Miller’s throw. Fans chanted “Safe!” as the umpiring crew reviewed the play and erupted with cheers when it was the call was reversed, with Gurriel sliding his foot under Garver’s tag.

Jansen gave the Blue Jays more of a cushion with a one-out home run to deep left field making it 10-8.

Romano took the mound in the ninth, striking out Seager, inducing a Garver pop fly, and fanning Lowe.