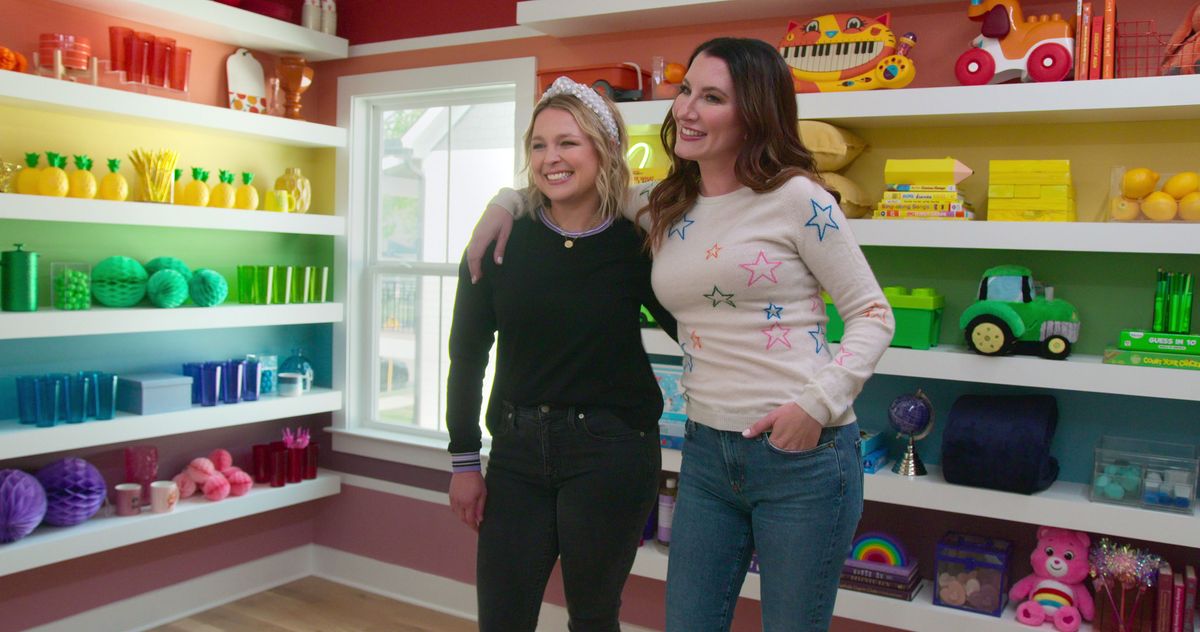 A prism of their own making.
Picture: Netflix

In the first episode of the new season of Netflix’s Get Organized With the Home Edit, Clea Shearer, one of the company’s founders and faces, sends her kids to report back from the pantry while she makes a grocery list. They need “yellow snacks,” they call, and they’re “low on purple!” When the kids point out they want “more green,” she knows what that means — veggie straws, and sour-cream-and-onion potato chips, both of which come in shamrock-colored bags. As you’d expect from a professional organizer of Clea’s caliber, her larder is basket-sorted and color-coded; her kids think hue, not brand. Everything’s arrayed like a rainbow, the calling card of her flourishing enterprise.

“The rainbow,” Clea said in season one, while sitting with her partner Joanna Teplin in front of a wall of books done ROYGBIV, “really represents what our company stands for. It’s a smart, functional system. It’s orderly, and it’s really beautiful to look at.” Their Instagram feed is a bastion of rainbow pleasure — with veggies that range from scarlet bell peppers to plummy eggplants arrayed across refrigerator drawers and under-sink caddies that start with orange Fantastik and go through indigo Finish Jet-Dry. On the day of their Walmart product launch in early March, the Home Edit not only designed an in-store nook with floor-to-ceiling rainbow stripes, they also dressed the team working there to match. Tea caddies, maxi pads, Legos, bins of cold and flu supplies: Nothing escapes the full-spectrum treatment.

Season two kicks everything about the Home Edit up a notch, fitting now that Reese Witherspoon’s joy-pelting behemoth of a media company, Hello Sunshine, has acquired them. The rainbows now lurch out from every corner. Clea in particular is almost always wearing one — across sweaters, down sleeves, on her watchband — a prismatic foot soldier for her company’s schtick. (Clea and Joanna’s “uniforms” are perfectly tuned for their audience: bright tops that exude friendliness, stretchy workhorse jeans that foretell their work’s laborious nature, $500 Golden Goose sneakers for that rich-but-casual feel.) In one episode, the Home Edit hires a muralist to decorate the wall of a client’s massive playroom: The result has big Lucky Charms vibes that would thrill Dorothy Gale. The company’s new home/office has “a rainbow room” with horizontal color bands wrapping around the walls and shelves displaying a hodgepodge of matching objects, from marigold pillows to lavender toy trucks to chartreuse piñatas. (It’s unclear what purpose the room serves except to be revealed.) There they are, beribboned across the screen, those perky avatars of regimented abundance. Rainbows! So cheery, so damn optimistic, so abundant.

The organizing industry bills its work as a strenuous but rewarding activity of the leisure class to gather their multiplying goods into tidy categories. Cheap domestic labor once meant that the rich had staff to keep their crap sorted and the poor didn’t have enough crap to worry that it might not spark joy. After World War II, cultural innovations like wedding and baby registries brought more and more stuff into the home; goods were cheap, time was abundant, and plastics were absolutely everywhere. By the 1990s, reactions against second-wave feminism turned keepers of domestic order like Martha Stewart into classification queens. The organizing boom ballooned to the point that the most common objects left curbside in my neighborhood are plastic Container Store bins that have themselves become the clutter. We’ve gone full ouroboros.

Get Organized With the Home Edit is only the latest manifestation of our national obsession with de-pack-ratting, and they preach “democratization.” For their show, the hosts organize the massive rooms of super-privileged celebrities and the tiny rooms of the regular folk—they’re equal-opportunity shit-sorters. (Their off-camera services, on the other hand, start at $595 for a virtual DIY consultation, after which you haul and purge and “rainbowfy” on your own.) In either case, the central notion is the same: Take the stress of locating an item and turn it into a visit to the beautiful museum of your bits and bobs.

We Tidying Up With Marie Kondo, the end product is the same house with less stuff. The KonMari method does advise (in thorough, thorough detail) the most practical ways to contain your goodies for optimal maintenance; for instance, she advises you put clothes into drawers without stacking them so you don’t need to go digging. And the aesthetic result is satisfying — tight rolls of underwear lined up like little cotton soldiers and skirts arranged from lightest to darkest. But the ultimate goal is to ritualistically release yourself from the burden of keeping too much and smothering under the junk. Get Organized asks that clients purge, or “edit,” as they call it, but doesn’t require it. Some clients this season, like a sweet but recalcitrant 8-year-old LOL-doll collector, hold on to every last pink plastic shoe. A couple with a laundry room–office–pantry/closet space the size of a small garden shed insists so hard on keeping a collection of hip-high nutcrackers that the organizers have to buy them an actual garden shed. But the Home Edit doesn’t mind. The show’s tactic is to turn your home into a store of stuff you already own.

It’s present in their language, like the glossy-mag-butchered phrase “Shop your closet.” In one episode, Joanna describes open racks and shelves as “perfectly merchandised” because the heels are spaced and sorted and the purses lined up like soldiers, just as they are on a shop floor. The idea is to sell your own stuff back to you by making it new again, to turn the stress of clutter into the pleasure of abundance. The baskets and bins the crew is marketing (which, it must be noted, look and feel exactly like every other basket and bin born of an organizing guru; I own them) are always called “the product” because the Home Edit knows they’ re hand-selling through the TV screen. You already have too much, so here are some more things for you to buy to contain it, and more things to buy to contain the first set of things you bought.

If viewers see in Marie Kondo the pursuit of a pared-back Japanese aesthetic, Get Organized represents the tenacious way Americans hold onto and celebrate their excess — we want to keep our stuff and make it pretty, too, dammit. (What we really need is a third option, an intervention-style TV show that restrains people at the Target checkout line.) There is never-ending content for a show about crap-happy Americans; behind every garage door lies a wasteland of the little-used and strewn about. And the Home Edit is now more than happy to sell you even more.

And here enters the rainbow. Some objects lend themselves to beautiful organization — plush wool blankets, glimmering face creams. Others — canned beans, spare toothbrushes, gym clothes — might look neat when grouped and sorted, but never alluring. The rainbow tricks the eye. Three hundred crayons put upright in a lazy Susan might look tidy, but when they’re arranged from scarlet through violet, they’re a display in and of themselves. Every room is cheery when its mess is corralled into the color spectrum. Construction paper, Gatorade bottles, bathroom cleansers — they all hold the possibility of pretty. “Organizing has been in the cleaning world instead of the design world,” Clea explains in one episode, and the Home Edit wants to change that. Other organization gurus advise you to hide the stuff—under the bed, behind a door, in a closet. Get Organized says to make the stuff into the look. It’s a formula anyone with fully functioning rods and cones can follow. Rainbow sorting is so elementary that my daughter’s Montessori school uses it for organizing work in their classroom. The 3-year-olds know the green marker lives with other green markers and that yellow and blue go on either side.

But there’s more to it than just re-sorting what’s there. The Home Edit‘s Instagram feed dips into fantasyland, where fridges are packed with color-coded fresh produce but entirely devoid of the normal detritus of takeout containers and almost empty, upside-down ketchups. (Nothing seems to piss off the Home Edit’s commenters more than an unrealistic refrigerator.) The playroom project from season two has a half-dozen plastic bins each accorded a different colored pom-pom. One overhead picture captures a drawer with 16 perfectly fitted dividers: Six of them hold one color of crayon each, as if any reasonable human (let alone a child!) owns and manages 24 red, 24 orange, 24 yellow, 24 green, 24 blue, and 24 purple Crayolas, every one perfectly pointed and never used. This is not an aspirational home; this is a photo shoot.

I remember that feeling from the full-page shots of bountifully stacked sweaters in vintage J.Crew catalogs. The colors ranged from “geranium” to shamrock to wine, sometimes with 20 or 30 options; the dream wasn’t to own one piece of their pettable cashmere but all of them. The Home Edit’s aesthetic pushes that same desire to collect and arrange everything from baby wipes to Lysol cans in a jolly little array. You can have all your junk sorted into a spectrum and love it, too.