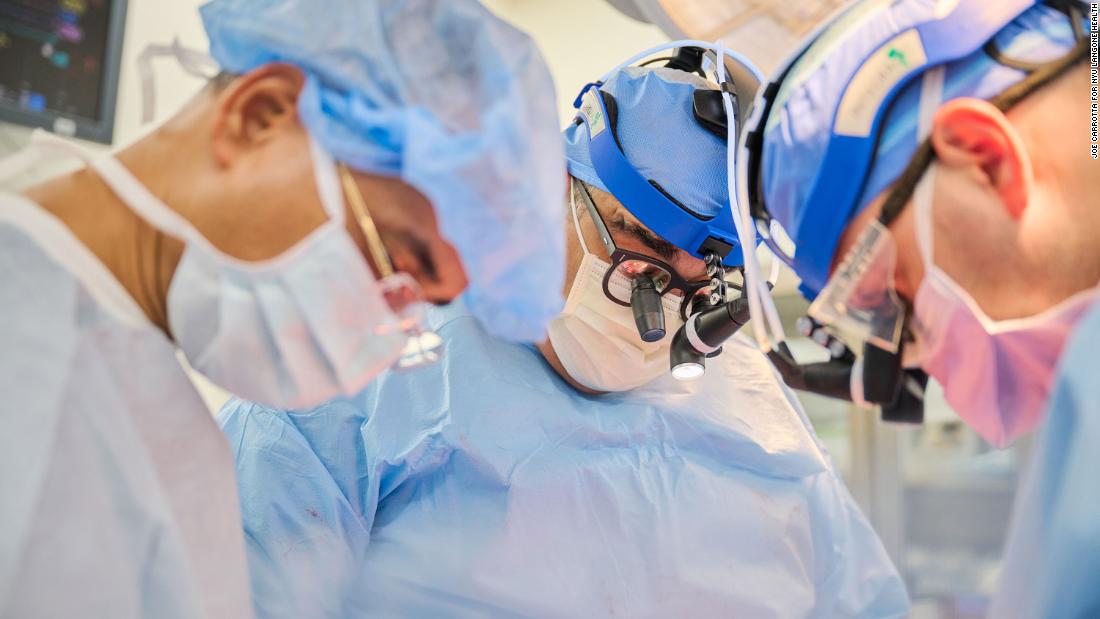 The procedure was the first of its kind and represents a breakthrough in efforts to determine whether organs from non-human animals can be modified and used successfully in humans in need of transplantation.

The 72-year-old receiver, Lawrence Kelly of Pennsylvania, had been declared brain dead. His family donated his body for the study, which aimed to determine how well the modified pig heart worked in the body of a deceased human.

After Kelly’s transplant in June, the research team repeated the procedure with another deceased recipient, Alva Capuano, 64, of New York, in early July.

“We can do much more frequent monitoring and really understand the biology and fill in all the unknowns,” he said.

He added that their study was unique because they tried to mimic real-world conditions, for example, by not using experimental devices or drugs.

The researchers are working on releasing further details of the study.

“He came out a hero”

The researchers traveled out of state to procure the heart, which featured genetic modifications aimed at a number of factors, including modulating the growth of the organ and reducing the risk of the recipient’s immune system rejecting it. .

“It was about an hour and 15 minute flight from New York, which is typical of the distance we take for a clinical transplant,” said Moazami, who performed the transplant.

The heart went out to Kelly, a Navy veteran who was declared brain dead after a car accident. Kelly’s fiancée, Alice Michael, has authorized the donation of her body to research.

“They were going to take his liver, and they couldn’t find a recipient. And then New York University called me with this research thing. And I automatically said yes, because I know that he would have wanted to. He loved helping people,” she said.

“When they asked me, I didn’t have to think twice about it. I automatically said yes, because I knew it was groundbreaking research, and I know he would have wanted it It was difficult because I had to wait to bury But in the long run, maybe he can help a lot of people.

“He was a hero in life and he came out a hero,” Michael said.

After the transplant, the researchers ran tests for three days to monitor heart acceptance, while the recipient’s body was kept alive using machinery, including ventilation.

“No signs of early rejection were observed and the heart functioned normally with standard post-transplant medications and without additional mechanical support,” the medical center said in a news release.

Additionally, the researchers said they found no evidence of porcine cytomegalovirus (pCMV) infection, which experts say could be a barrier to using pig organs in human recipients.

A new method for transplant research

Testing how well an organ transplant works using a deceased person’s donated body is a new method, Moazami said. The first use of this technique for research occurred in September, when an NYU Langone team led by Montgomery transplanted a kidney from a genetically modified pig into a deceased human.

While the study represents a step forward, Moazami said, more work needs to be done before such a procedure is widely available outside of a research setting.

“There is still a long way to go before moving from here to clinical transplantation to support a longer-term patient,” he said. “There are still many, many, many questions that need to be answered.”

A major limitation was the length of the study, he said; the organ and the recipient were not evaluated until 72 hours after the transplant. Additionally, there could be significant differences in how deceased human bodies respond to the procedure, compared to living humans. More research will be needed to determine how transplant recipients would fare in the long term.

“We thought that in 72 hours we could learn everything we would learn if we had extended it a little longer,” Moazami said, noting that the short time frame limited the expense of the study and allowed the recipient’s body to be returned to his family more quickly.

The transplantation of animal organs into humans also raises a range of other ethical questions, such as whether the benefits of using a modified pig heart outweigh the risks to which a patient would be faced with if they instead waited for a human organ to become available.

For Montgomery, research has a personal side. He received a human heart transplant and he said the difficulty of getting a transplant was part of what motivated his work.

“During my illness, it became clear to me that this paradigm was not working. It is a failed paradigm, and that we need a renewable resource, an alternative source of organs, that does not require someone die so someone else can live,” he said.

“My whole disease was about making me aware of the reality of this and changing my way of thinking, not that it’s not important to keep doing what we’re doing, but we need to move this in a direction that’s completely different. “

Moazami suggested that animal transplants could one day be useful in the pediatric setting, where patients may face even greater challenges getting a human organ transplant in time. Animal organs could be used as a “bridge”, buying time before a more optimal human organ becomes available.

“Maybe the best way to study this is maybe to use it as a bridge to a human transplant, if you will, so that any patient who needs an organ gets that heart with the stake. warning that when a human heart becomes available, it matches the recipient, we exchange it again,” Moazami said.