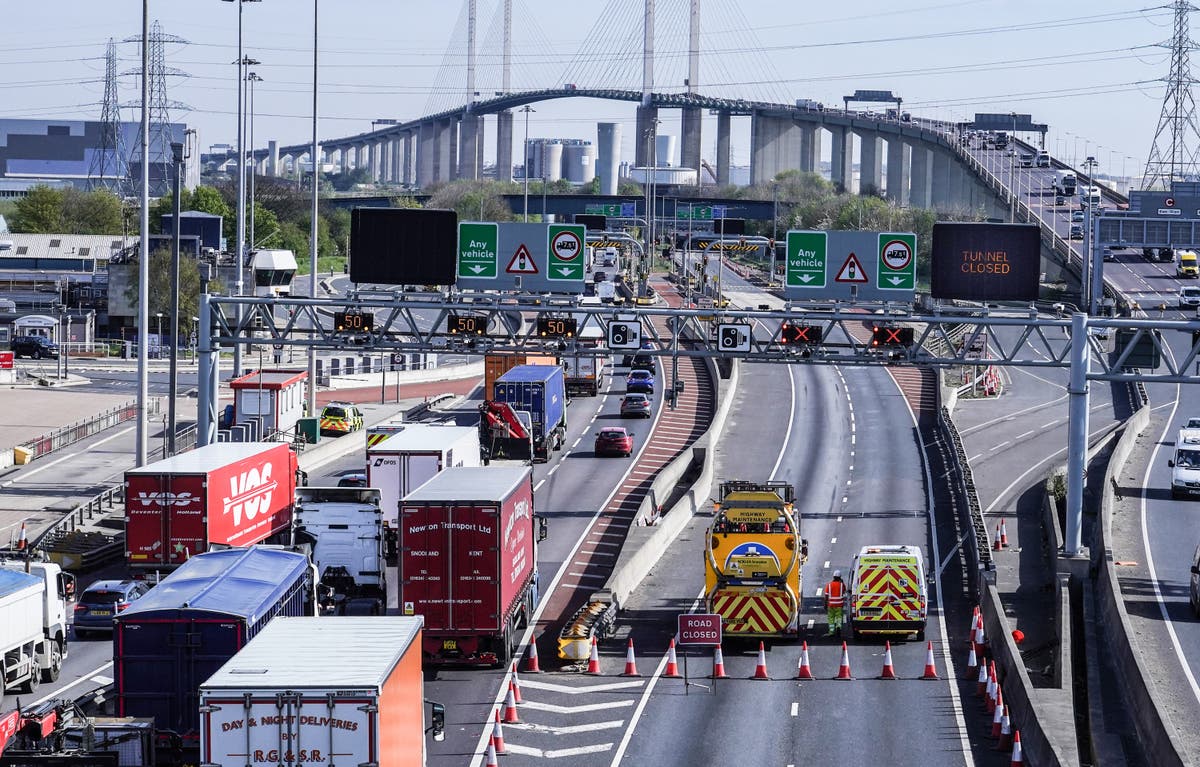 upplies of petrol and diesel at filling stations in some areas of the country are running at around half their usual level as the UK’s travel network came under pressure ahead of the Easter getaway, new figures suggest.

Petrol stock levels at garages in eastern England averaged 19% as of April 10, with south-east England recording 21% and London 22%, a drop from the pre-pandemic average of 40%.

It comes as travelers using airports, train stations and roads were left waiting for hours in long queues on Thursday.

Delays were seen on motorways, with 27.6 million car journeys expected to take place over the bank holiday weekend.

Diesel stocks have also dropped in recent days, averaging 23% at filling stations in eastern England as of April 10, compared with a pre-pandemic level of 48%.

In London, diesel stock levels have dropped to 24%, down from 46% pre-pandemic, while in south-east England they have fallen to 26%, down from 47%.

During the fuel shortages at the end of September last year, petrol supplies fell as low as 12% in eastern England and the South East, and 13% in London.

The figures have been published by the Department for Business, Energy & Industrial Strategy and are based on snapshots of petrol and diesel levels from a sample of around 4,700 filling stations across Britain.

While climate activists have been causing some disruption to the fuel industry, the Fuel Retailers Association – which represents independently owned forecourts in the UK – said “the majority are unaffected” by the activism.

RAC traffic spokesman Rod Dennis said: “Although we’re expecting the biggest number of Easter getaway trips by car tomorrow – around 4.6m – it’s clear some drivers are keen to make an early escape ahead of the bank holiday.

“As well as the closure of the coastbound M20 for Operation Brock Zero, earlier collisions are causing problems on the south-eastern M25 and roads connecting with it, as well as on the A303 in Wiltshire.

“From a breakdown perspective, we’re seeing high demand for our service across northern England, especially around the Lake District, as well as the coastal areas of West Wales.”

National Highways said there were 90-minute delays near the Dartford Tunnel in Kent due to a broken down lorry and a spillage.

There were also 30-minute delays due to the M18 being closed in South Yorkshire.

However, National Highways reopened some junctions of the M20 on Thursday evening as it scaled back Operation Brock “in light of the reducing threat of disruption to services across the English Channel”, with more junctions possibly to reopen overnight.

Elsewhere, images on social media showed a large number of people waiting for Tui check-in desks at Manchester Airport, with other customers telling of a 90-minute wait for luggage.

A Tui spokesperson said: “We can confirm that unfortunately due to staff shortages at Manchester Airport today, some customers are experiencing longer-than-usual queue times at check-in.

“Please be assured that our teams are working as quickly as they can.”

One passenger, Lukasz Ceglecki, from Burton upon Trent, said although there were long queues, they were moving “relatively” quickly.

Another, Adam Francis, said on Twitter: “Utterly shambolic scenes in terminal 2 at @manairport when a cleaner is the only person to provide any information on why we have no bags after 90 minutes.

“Even then she doesn’t know when we will get them.”

Manchester Airport said passengers are advised to arrive three hours before their flight and double check their hand luggage.

Meanwhile, those at Birmingham Airport told of waiting in hour-long queues for security, despite paying £4-per-person for fast-track services.

Joe Clifford, 23, who was flying to Malaga in Spain, told the PA news agency it took him about an hour to get through security due to “very long queues”.

Dozens of British Airways and EasyJet flights to and from Heathrow and Gatwick were cancelled.

Rail passengers have also been warned of delays as Network Rail carries out 530 engineering projects costing a total of £83 million.

This includes the closure of the West Coast Main Line between London Euston and Milton Keynes for four days from Good Friday due to upgrades of the existing line and HS2 work.

Parts of the railway between Birmingham International station and Coventry will also be closed, as will lines around Crewe station.

Those at London St Pancras said there were long queues for services to Europe on Thursday morning.

One passenger heading for France said he had waited for over an hour due to staff shortages.

A West Ham fan heading for his side’s Europa League second leg tie against Lyon said there was “carnage” at the station.

Dover-Calais sailings by P&O Ferries are also suspended, with large tails of lorries forming on roads approaching the Port of Dover.

A spokesperson for the firm said: “We apologise unreservedly to all customers whose scheduled journeys with us between Dover and Calais have been canceled whilst we are unable to sail.

“It is only fair and right that we make alternative arrangements for those customers, which include transferring them on to our Hull-Europoort service to Rotterdam, or booking them on to services with Brittany Ferries between Portsmouth and Caen. ”

It said this would come at no extra cost for customers, with mileage expenses funded and a 25% discount on the original fee.