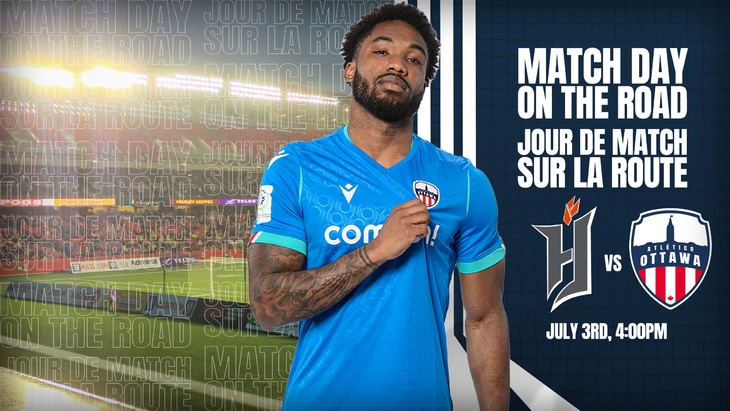 The only Sunday game this weekend in CPL action is a fascinating ComeOn! Game of the Week, as Forge FC welcome Atlético Ottawa to Hamilton for the second time in 2022.

Bobby Smyrniotis’ Forge team will return to the pitch at Tim Hortons Field in search of a reversal of fortune, after lost at home to Valor FC on Wednesday — their first defeat in friendly territory since the 2021 CPL Final. That game saw the Hammers repeatedly denied by a stingy Valor backline, as William Akio provided the only breakthrough the Winnipeg club needed to clinch a impressive victory against the three finalists of the CPL.

Forge, however, remains in a strong position with a lot of confidence; prior to this Valor game, they had won four straight in CPL action, beating their opponents 14-3 along the way. As it stands, they’re fourth in the standings with a 5-2-3 record (tied on 17 points with fifth-placed HFX Wanderers), but they’ve still played at least two fewer games than all other league teams. That said, they will have been disappointed to lose at home midweek after a 10-day layoff, and as such, it will be essential for them to start well against Ottawa and move up the ranks.

Hoping to build momentum of their own, Atlético Ottawa, who beat HFX Wanderers 2-0 on Thursday at the Wanderers Grounds to move into sole possession of second place with a 6-3-3 record.

The only time these teams met this season was also at Tim Hortons Field in May, when Ollie Bassett and Noah Jensen traded scoring goals en route to a 1-1 draw between the Ontario teams. Historically, Forge has had the upper hand in this game with six wins in seven games, as Ottawa has never beaten the Hamilton club. In fact, Bassett’s goal in May was the first Atleti have ever scored against this opponent.

Now that they’ve snapped their scoreless streak, the next step for Ottawa will be to finally take three points against Forge — although it’s never easy to do that in Hamilton, especially after the hosts have just lost at home.

Make your match choices before kick-off at canpl.ca/predictor for a chance to win prizes, including the grand prize of a trip to the 2022 CPL Final! To learn more about ComeOn!, Click here.

All CPL matches are available to stream on OneSocceror on TELUS Télé Optik channel 980.