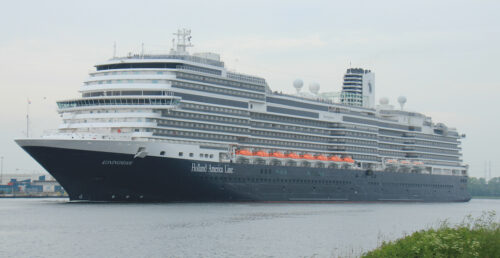 Holland America Line’s Koningsdam is officially set to be Vancouver’s first cruise ship arrival in about 2.5 years — or 891 days, to be exact.

Vancouver Fraser Port Authority reaffirmed today the ship is still scheduled to enter Burrard Inlet and berth at the Canada Place cruise ship terminal in downtown this Sunday, April 10, 2022. The vessel will pass under the Lions Gate Bridge before 7 am, and return to sea ​​with a new group of passengers on the same day late in the afternoon.

“We’re delighted to welcome cruise back to the Port of Vancouver after what has been a long two years,” said Robin Silvester, president and CEO of the Vancouver Fraser Port Authority, in a statement.

“Vancouver is a world-class travel destination and, together with industry and tourism partners, we’re looking forward to once again supporting great experiences for cruise passengers starting or finishing their cruise in our award-winning facility at Canada Place.”

Prior to ending its current sailing in Vancouver, the Koningsdam will be making a mid-itinerary stopover in Victoria on Saturday, which will mark the arrival of the first ship in Canada since before the pandemic.

With 76 calls, Holland America will have the single largest cruise line presence in Vancouver this year, using other vessels as well such as the Eurodam, Nieuw Amsterdam, Noordam, and Zuiderdam. The Zaandam — a previous season regular for Vancouver with frequent sailings — is noticeably absent from this year’s schedule.

Unlike Victoria’s cruise ship business, which is largely generated by mid-route stopovers between Seattle and Alaska, Vancouver’s Canada Place serves a far more significant role as a homeport to the vast majority of its cruises through the Inside Passage reaching Alaska.

The Caribbean Princess was originally scheduled to be Vancouver and Victoria’s first cruise ship earlier this week, but Princess Cruises made a sudden decision mid-cruise to cancel the remaining leg of its itinerary between San Francisco and British Columbia. Instead, passengers on the cruise, which began in Florida, disembarked at San Francisco, with the official reason being the need to go to dry dock to perform maintenance. However, there were also reports of a spike in COVID-19 cases onboard.

But the cruise ship is a welcome reprieve for the tourism and hospitality sector and is expected to directly benefit struggling business districts downtown, especially Gastown.

Each cruise ship at Canada Place generates about $3.17 million in direct economic activity. In 2019, the cruise industry generated $2.2 billion in total economic impact and supported tens of thousands of jobs.

The cruise season will begin to pick up in late April, with at least one cruise ship scheduled at Canada Place daily for most days through early fall. The last cruise ship of the season is scheduled to be the Crown Princess on November 2, 2022.

“The cruise industry has such a significant impact on local businesses and supports so many jobs – what a long two years it’s been for everyone whose livelihood has been affected by the absence of ships in the harbour.”

In 2022, over 60% of all cruise ship calls will be plugged into Canada Place’s electrical power while berthed, which allows the ships to shut down their diesel-powered auxiliary engines, and rely on low-emission electricity to reduce greenhouse gas emissions.