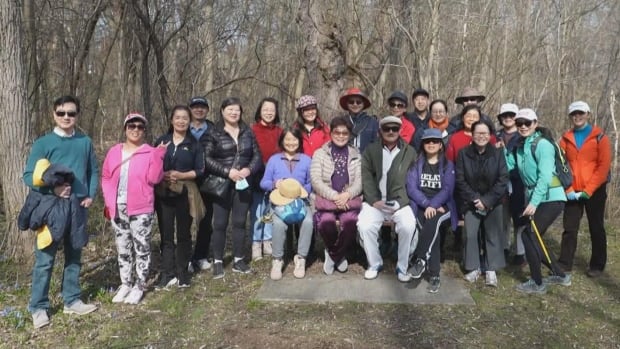 Feeling isolated during the pandemic, a group of Chinese seniors in Toronto decided to come together to overcome loneliness and explore the city they now call home.

Through the non-profit organization Aging In Cloud, seniors began meeting virtually last May, practicing practical skills like gardening and cooking. They also learned how to access resources such as the Canada Pension Plan.

“Elders [are] people who need help and support the most,” Judy Du, co-organizer of Aging In Cloud, told CBC Toronto during a recent hike on Duncan Creek Trail.

This is especially true for seniors who are also immigrants, Du explains, which is why their workshops and meetings are offered in Mandarin, giving members the chance to learn more about the city in their own language.

Now, as temperatures rise and COVID-19 restrictions ease, the group is coming together for in-person hikes in North York parks.

“When they land here, they have to find a job to support the family,” Du added.

“So a lot of people don’t have the opportunity to learn about city parks and nature. We just encourage them to get out of their homes.”

Not only do they explore new outdoor spaces, but they also try to leave them in better condition than they found them, in some cases picking up trash along the way.

“My favorite part is people coming together and putting our focus on our land to make it a better place for everyone,” said Qing Miao, a participant.

Angela Wong, co-organizer of the group, hopes this new funding will help them reach even more seniors in their community.

“A lot of people are new to the country and have no way of [get to] get to know people,” she says.

“So when you see each other, you feel better.”