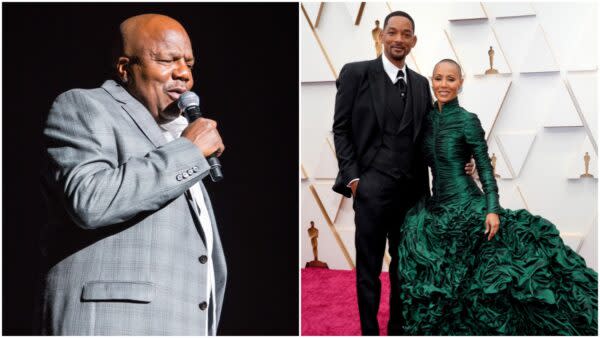 Like most, comedian earth quake is weighing in on the scandal at the Oscars last month involving Academy Award winner Will Smith and Chris Rock. Things got physical between Smith and the “Good Hair” star after the latter made a joke about Jada Pinkett Smith’s shaved head amid the actress’ battle with alopecia. This autoimmune disease traditionally results in hair loss.

During an interview on “The Breakfast Club” with co-host DJ Envy, Angela Yee and Charlamagne Tha God, the veteran comedian, whose real name is Nathaniel Martin Stroman, had some stark criticism for “The Matrix” star, slamming her actions after Smith walked onstage while Rock was presenting the next category for “Best Documentary,” and slapped Rock in the face, shocking viewers worldwide.

“Personally, I feel sorry for Will ’cause you know he’s being beaten and abused by Jada–just saying. That’s what happens when a man loves a woman who doesn’t love him, and he’s doing everything to try and make sure that … try to win her love,” the 58-year-old star began.

“I’ve been there before,” Earthquake admitted. He continued, “You have to make a decision. Either accept it for the love she giving and just accept that or just leave it alone, but you will never ever ever win her over this cause you can’t make her heart feel what it don’t — and she don’t. And her actions that night showed it, and I feel for him.”

When asked to elaborate, the funnyman stated that even if the “Gemini” star felt Rock disrespected his wife, the actress still had a duty. “She knows her man, and she saw he was about to go up here. A woman that loves you would stop you,” he said. “And then we do radio, we know the rules of FCC, and it was at the Oscars. Will doesn’t even cuss, and he out here using profanity on a live broadcast. He knows Hollywood; he knows the rules.”

Earthquake said Pinkett Smith had a few opportunities to deny the situation but thing against it. He also noted that she has still yet to defend her man — although she released an Instagram statement about healing.

“She didn’t try and stop him, on there, on two occasions, and then lastly, man, she has yet to release the statement to say, ‘Hey man, my man is a good man; he lost his cool. It’s not indicative of who he is. He got over three decades of good work towards the people he never had that, he lost his cool, ain’t nothing, no,’ ” he said.

He continued, “She should protect her man. What he did was protecting her. A woman would come out and vow for you, that’s not you, that’s not him. It’s just a natural — in my humble opinion — a natural reaction for a woman who sees a significance of what he did and what it’s gonna cost him if he was doing it for you.”

Earthquake said at some point the actress needs to stop being “politically correct” and “circle the wagons and say this is my man; this is what I care about, he’s not like this. He lost it that day and that he’s human, and please don’t let this night define who he is as a person.”