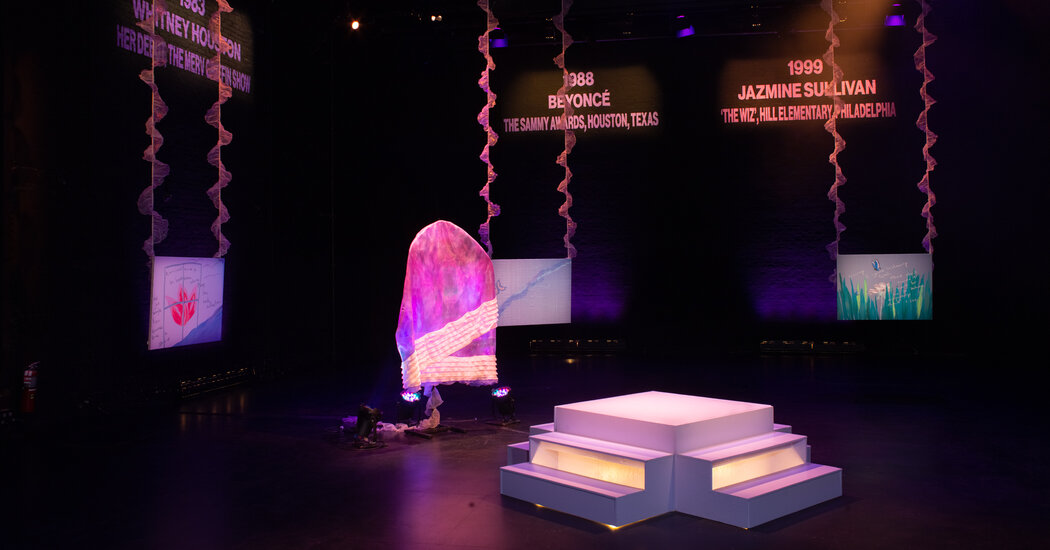 I’m sitting in the bleachers of the kitchen, a historic Manhattan performance space, watching Stephanie Mills sing a showtune on my phone.

No, the night wasn’t so boring that I had to step away from Instagram. “Where there’s love overflowing,” a self-proclaimed four-dimensional score by young New York artist E. Jane, unfolds partly on your portable screen.

Scan a QR code at reception, point your camera at one of five large gouache murals on the kitchen walls spelling out the names and dates of key performances from “Home”, a musical showstopper from Broadway’s 1975 “The Wiz,” and an app links to “DivasSingingHome__archive_v2.mp4.” There’s Mills, star of the original cast. Whitney Houston did the number for her network television debut in 1983. Diana Ross in the film adaptation; Jazmine Sullivan in an elementary school production; and Beyoncé in 1988, a seven-year-old Texas award show owner in a sequined blue Dorothy outfit. The compilation of E. Jane gives Mills an encore: a triumphant 1987 performance at the Apollo.

In a way, the Kitchen show could have been an email. Maybe a website. Another artist would have installed monitors. Instead, E. Jane took the trouble to write the divas’ names on the black stonework of a physical room, highlight the paintings, and then link them via an augmented reality (AR) smartphone app. clunky, browser-based to a video hosted on Vimeo.

This continuous serenade is just one of the ways in which E. Jane pushes the exhibition, and the viewer’s attention, out of time or the circumscribed space that is the Kitchen. A low square platform in the center of the hall is a placeholder for the highlight of the show, a live public performance on May 14. From May 11, visitors could hear the muffled accents of E. Jane (who uses the pronoun they) and the closed repeats of their cast. through the kitchen hall doors.

Born in 1990, seemingly on the internet as much as in Maryland, E. Jane is known for questioning the ways we construct identity, denying the traditional boundaries of art as well as conventions of gender and race. Last but not least, they released albums and performed live as an underground pop star avatar named Mhysa.

“Where there’s love overflowing” hybridizes the White Cube and the Black Box – the normative frameworks of fine art and avant-garde theatre, respectively. The usual categorical language around contemporary art is collapsing. Here, the work does not ring at the gallery. The performers, including one – Houston – who died in 2012, present as much to an absent audience, past or future, as to the present viewer.

E. Jane is the sixth diva – one for the digital age, playing the role of Mhysa. Behind the stage, an iridescent tulle bell covers a monitor displaying “Mhysa – When I think of home, I think of a bag”, a recording of a 2021 webcam performance of the song. The audio pumps through the theater speakers. But visitors have to lift the fabric to get a good view. Beneath this shimmering skirt—another displacement, another buffer—the rest of the world disappears.

Flanking the bag, five stretched fabric prints float from threads as conceptual backdrops. The panels offer snippets of the lyrics to “Home” in nubby digital script, accented with sickening graphics of butterflies and flowers. While the divas describe a place “with overflowing love”, you can frame the prints of E. Jane in the AR app provided by Kitchen and watch wildlife flit and unfold across your screen. A text on the right panel appears, moves away: “It’s real to me.”

This is the first institutional personal exhibition of E. Jane, but that’s not their only connection to cooking. Lumi Tan, who curated the current show with Sienna Fekete, tapped E. Jane for a 2019 residency at the Studio Museum in Harlem. Legacy Russell, executive director and chief curator of the kitchen since 2021, devotes a chapter in her book “Glitch Feminism” (2020) to how E. Jane and Mhysa don’t privilege IRL over cyberspace.

Russell tends to exaggerate the utopian bent of our corporate Internet, and the state of the art in AR is pretty goofy. However, in the New York hall that nurtured the musical experiences of Meredith Monk and Robert Ashley, the presentation of E. Jane signals a change in mood. In fact, “appearance” might be a better word for what E. Jane does – a work of art not defined by bodies, stage, or physical space. For them, home is a place where the hierarchies of the straight world don’t matter.

“Home” is a powerful but tearful song. It is also fundamental. Her love focus focuses on the interplay of meat space and insubstantial connections. Dorothy can cross Oz, but also take naps in Kansas. Oz can be an illusion without neglecting the love of his Oz-bound friends. The same goes for goodnight text lovers or E. Jane You-Tube divas. We wake up, we die. In the meantime, whatever it is, the love is real. But I still prefer him in person.