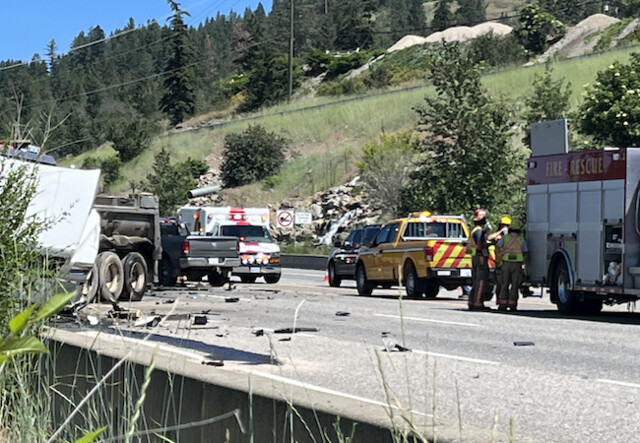 The driver of a tandem dump truck involved in a fatal collision north of Vernon on Tuesday says it may be a while — maybe never — before he gets behind the wheel of a big rig again.

Will Oben is requesting the extension of the central concrete barriers along the section of Highway 97 along Swan Lake and north along Highway 97A in Spallumcheen.

The driver of the van, a 69-year-old Enderby man, was pronounced dead at the scene.

“If the barriers had been there, they would have prevented him from crossing the halfway line and might have saved his life,” Oben said on Thursday.

Oben is back home after being released from hospital, but says he is “really disturbed” by the ordeal.

He plans to go into counseling and says, “It will be a while before I get back in a truck…maybe I never will.”

Oben’s voice cracked and he cried as he was overcome with emotion.

“If only I could have stopped sooner…but it’s hard to stop when you’re in something so big and heavy.”

He said his memory of the event is hazy, but he can’t get rid of the vision of the demolished front of the van.

He had other close calls with bad merges at Blattner Road further north on the same stretch of road, and a few years ago a woman drove in the back of her trailer in California.

“A lot of people drive fast on that stretch,” he said of Highway 97A … barriers would help.

The same issue arose after a 2019 death near Armstrong that claimed the life of Ruth Blencoe.

Blencoe’s husband George made a similar call for freeway barriers, which were installed two years later in 2021 on this part of the freeway.