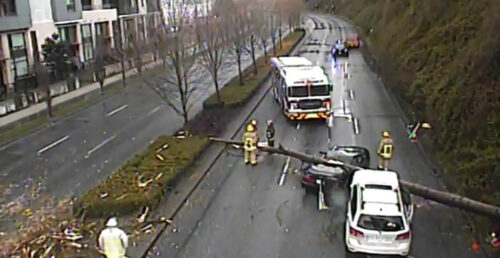 One person is dead after a tree fell on a moving car in South Vancouver Tuesday afternoon.

The tree fell across a black convertible, crushing the car and trapping one person inside. An image of the scene was captured on a City of Vancouver traffic camera pointed at Marine Way and River District Crossing.

The tree fell across the middle of the convertible, and emergency responders can be seen near the vehicle.

The individual died on scene, the Vancouver Police Department said in a news release. They did not say if the person was the driver, or if there was anyone else in the car.

Multiple calls about the fallen tree came in at about 5:15 pm, and police ask anyone with dash cam footage of what happened to contact them at 604-717-3012.

The fatal incident happened on an afternoon when Metro Vancouver experienced an April snow and hailstorm, but it’s not yet known what made the tree fall.