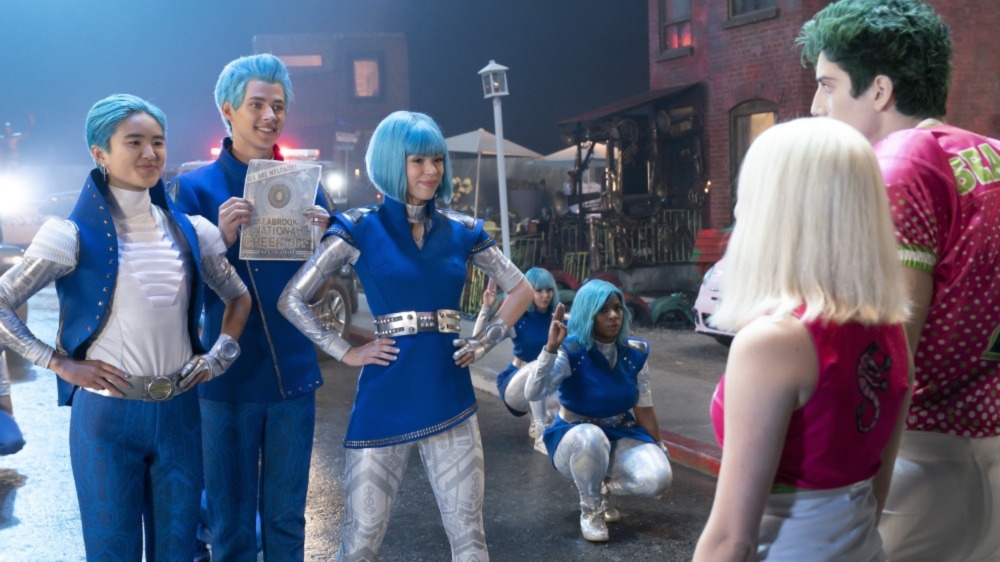 Disney+ has released the trailer and key art for the original “Zombies 3,” the third film in the “Zombies” franchise set to premiere July 15 on the streamer. A special “Lost Song” version of the film will air on the Disney Channel on August 12.

“Zombies 3” stars Milo Manheim and Meg Donnelly as zombie Zed and cheerleader Addison, respectively, who begin their senior year at Seabrook High in a town that is home to both monsters and humans. . Zed makes plans for college while Addison prepares for a party when alien beings arrive unexpectedly in their town.

“Zombies 3” also stars Chandler Kinney as Willa, Ariel Martin as Wynter, Pearce Joza as Wyatt, Carla Jeffery as Bree, Trevor Tordjman as Bucky, Kylee Russell as Eliza, Terry Hu as A-spen, Matt Cornett as A- lan, Kyra Tantao as A-li, James Godfrey as Bonzo, and Kingston Foster as Zoey. RuPaul Charles joins the cast as the voice of “The Mothership.”

From Disney Branded Television, “Zombies 3” is directed by Paul Hoen from a screenplay by David Light and Joseph Raso. Hoen, Light, Raso and Suzanne Farwell serve as executive producers.

See the trailer and key art from the film below.

“Five Days at Memorial” received its first trailer from Apple TV+. Starring Vera Farmiga, Robert Pine and Cherry Jones, “Five Days at Memorial” is based on real events chronicling the impact of Hurricane Katrina and its aftermath on a local hospital. The eight-episode limited series, based on Sheri Fink’s book, is produced and written by John Cuse and Carlton Ridley. Cuse and Ridley also direct the series alongside Wendey Stanzler. Farmiga, Pine and Jones are joined by Julie Ann Emery, Cornelius Smith Jr., Adepero Oduye, Molly Hager, Michael Gaston and W. Earl Brown. “Five Days at Memorial” will premiere worldwide on Apple TV+ with the first three episodes on Friday, August 12, followed by new episodes weekly every Friday. Watch the full trailer below.

Hulu has released the official trailer for Season 3 of “Solar Opposites,” the animated series from Justin Roiland and Mike McMahan. The series revolves around a team of four aliens stranded on Earth with differing opinions about humanity and their planet. Roiland stars with Thomas Middleditch, Mary Mack, Sean Giambrone as the voices of the four aliens. Roiland and McMahan produce with Josh Bycel and the series is produced by 20th Century Television. All three episodes of Season 3 premiere July 13. Watch the trailer below.

A new monthly series called “Arena” from G4 and WWE will premiere on June 29. The series sees internet personalities, celebrities, WWE stars, and athletes with notable feuds stepping into the G4 arena to work out their issues. The first episode will feature Twitch streamers QTCinderella and Myth. WWE star Xavier Woods and G4 host Gina Darling host the series, which airs on G4’s Twitch channel and WWE’s UpUpDownDown YouTube channel.

Linda Yaccarino, president of global advertising and partnerships for NBCUniversal, and Laura Correnti, partner at Giant Spoon, announced the launch of their new podcast, “Sunday Supper”, in partnership with iHeartMedia. Yaccarino and Correnti will meet with various entertainment and business personalities for career conversations. The podcast will be distributed through the iHeartPodcast network and available on iHeartRadio as well as all major podcast platforms later this fall, with episodes airing every Sunday.

Group One Holdings and Media City Qatar have signed a memorandum of understanding to develop a long-term strategic partnership. Together, the companies will collaborate on the production and development of a wide range of global content in Qatar across multiple media sectors, including original programming, studio shows and esports. The partnership will begin with Qatar featuring in the filming of Season 2 of Netflix’s “The Apprentice: ONE Championship Edition”, a commercial reality TV show airing worldwide.