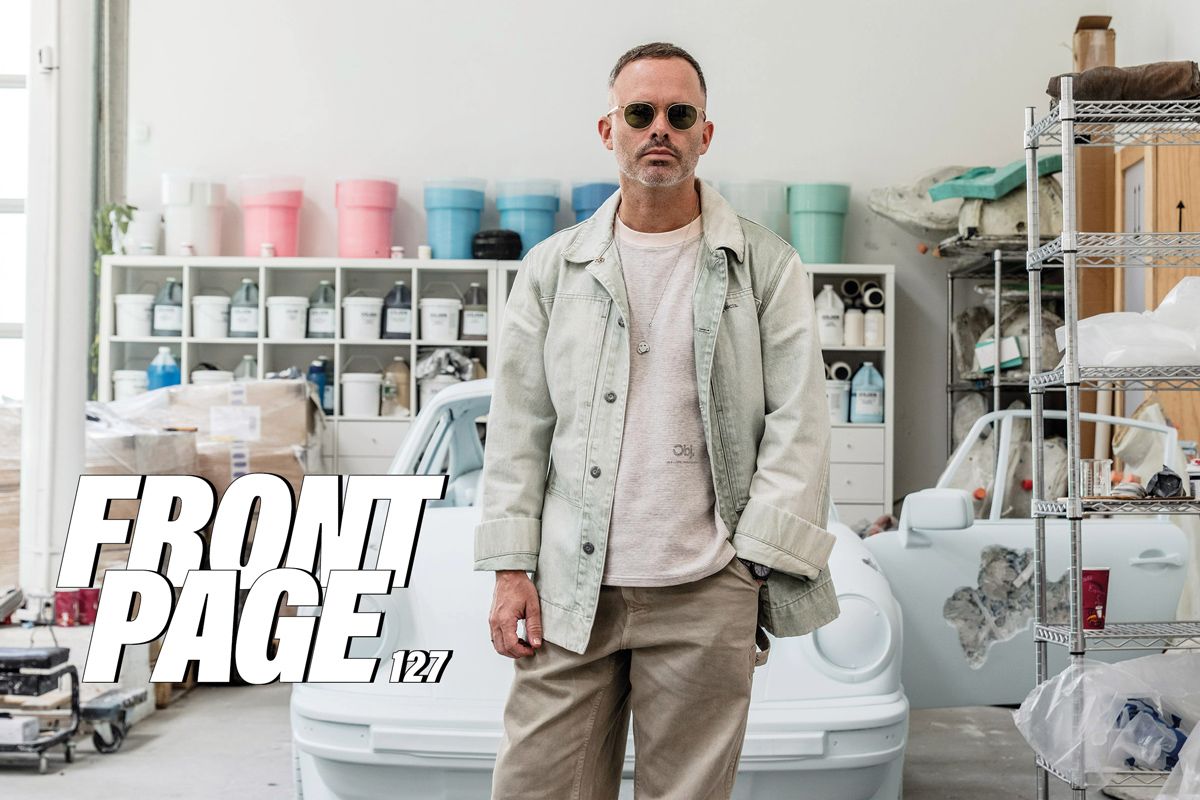 This summer, renowned artist Daniel Arsham made a serious foray into the world of fashion with Objects IV Life. Shortly after its launch, we spoke to Arsham for this FRONTPAGE interview diving into the brand and its philosophy.

Daniel Arsham has made a career out of making works that reference remnants of our nostalgic culture, like Pokémon, vintage cars, and Bart Simpson. A 2019 exhibition at Galerie Ron Mandos featured plaster casts of a Mickey Mouse figurine that had been wrapped in fabric and rope, while a 2018 exhibition at Galerie Perrotin in New York featured a plaster cast life size of the Delorean of Back to the future.

For his latest project, he teamed up with Stefano Martinetto, CEO and co-founder of Tomorrow, to launch a fashion brand, Objects IV Life. In June, the brand launched its first line (dubbed Chapter 001) which included various workwear made from unused fabrics. In a way, by repurposing work clothes from unused materials, Objects IV Life fits right in with Arsham’s work as an artist.

Arsham is known as a frequent collaborator, having worked with Dior, Porsche, Rimowa and design/architecture firm Snarkitecture – which he co-founded. With each of these collaborations, Arsham sought to add something new and unique to the dialogue instead of using trademarks for name recognition. The sustainability crisis in the fashion world and the possibilities of using dead animals were a decisive factor in convincing Arsham and Martinetto to launch Objects IV Life.

Around the official launch of Chapter 001, we spoke to Arsham about her bold foray into fashion and its place in her artistic oeuvre.

How did the idea for Objects IV Life come about?

I had a lot of overlap with the fashion world, and several people told me that I should create my own brand. I never thought it would be relevant if I wasn’t able to add something that really carried the character of the rest of my practice in terms of materials and details.

How did you meet Stefano Martinetto?

About three years ago, a friend of mine, Samuel Ross, introduced me to Stefano Martinetto. He wanted to talk to me about making a mark, something I had already told him I was not interested in by the way. Samuel said, “Just have breakfast with him and listen to him.” And the proposition that he cleverly understood was that thinking about materials was going to be really important. And he actually came to me with this proposal to create a brand that would largely use unused materials and fabrics.

How, more specifically, did you and Stefano approach the use of unsold materials?

Any brand you can think of ends up sitting on a huge amount of fabrics and materials that go unused. Sometimes they are resold as scrap. Thus, the first collection that I developed uses denim scraps woven in Japan. The steel toe caps will patina and change color – this is contrary to much of the way fashion thinks of itself, which is that it should be set in stone. Especially in luxury, the basic idea is that things are meant to be as they are when you see them on the rack forever, which is obviously an impossible task. We’re really thinking about embracing this idea of ​​patina and wear, almost to the point where the longer you have these things, the better they’ll look.

It’s also something inherent in work clothes, isn’t it? This idea that clothes will change because they are used for a specific purpose. But I find the ubiquity of work clothes interesting in that they no longer serve the same purpose for everyone who wears them. Where does your interest in workwear come from?

The materials and the first collection are largely based on things one might imagine to be workwear. But future collections are not like that. There’s outerwear, there’s a whole collection I’m working on that’s based around gardening. I even look at the costume. So it started like that, because there is a use case for these objects. I literally wear the steel toe boots in my studio for example. When it came to denim, it was more about the material available. We just found all this amazing unsold Japanese denim.

What is the difference between making art and making clothes?

The artwork is made to last forever, whatever that means. And I think clothes obviously aren’t designed that way, they’re not designed to age. So there are certain clues that have been put into the design of these garments, in the material. The hardware has a natural weathered finish, but (unlike the toe cap) it will not continue to tarnish to any noticeable degree. All buttons have been specially designed for the jacket to be removable; If you’ve decided you don’t want the buttons to stain the fabric over time, you can remove them. If you left them on, when the clothes are washed they will leave a nice mark around the edge of the button. But the buttons won’t stain the fabric because they don’t rust. The removability is designed around the ease of maintenance to protect the material of the washing machines as well as the ease of recycling of the garment at the end of its life.

I also left a lot of variations in things like brand marks that are on the clothes. These are not serigraphs. They are literally hand stamped onto the fabric at the factory. So there are variations in that. And usually one of the biggest challenges with this brand was convincing the factories that no, this is really how I want it.

You described Objects as a manifesto for change, what do you mean by that?

One of the things we’re also exploring is developing a system where clothes that people buy from Objects that they might eventually want to get rid of can come back to us and be redesigned into new clothes. It can also be things that are re-embellished. So if a jacket comes back and it has rips, or even if it just wants to go back to the studio cycle, it can earn something that makes it more contemporary. We think about that over a time horizon of 5, 10 years.

Why did you find it necessary to create a brand to begin with? I think an artist in themselves is a brand today, and so you can just release stuff under that brand.

It’s partly because I have a partner. Obviously, I’m not a designer, so I hired a number of amazing designers who helped me make some of the shapes and forms and went into the depth of the material with me. Sometimes, as an artist, it’s beneficial to have something that isn’t under your own name. It’s like you can create in this other box that doesn’t directly apply to work.

Can you tell me about the zine you launched with Objects IV Life?

I was thinking of sort of a lookbook that we could give people that would sort out the philosophy of the brand and the way I think about it. I have young children, and you know the children’s books that have very thick flat pages, like a cardboard page, almost? The book is designed like that. It’s only eight pages, so 16 pages, and the book actually becomes like a thick object, in a way. The idea is that for every chapter we publish, a book will come with it.

You also hosted a series of dinners around Objects.

It was about bringing people together and showing them the objects. The first took place last fall before the brand had even been announced, and it was actually about getting a group of friends together in a casual environment for feedback. I put out all my original designs for Objects, and we had a few samples with stuff there, trying to figure out what people thought of it and also looking for their notes and thoughts on it.

Did you use some of the stuff you heard at those dinners or events?

A lot of the interesting things that came out of those dinners were about the graphics or the photography and how the brand is conveyed. We worked with this great photographer who shot the first campaign, Joshua Woods, whom I met through a friend at that dinner. I didn’t know him before that. It’s one of those things where you build that network because I haven’t really worked in that space before. Like when I worked for Dior, I didn’t work on the photo campaign or anything like that.

What will future chapters of Objects for Life look like?

It varies quite widely, but for the next chapter there is a bit more color. One of the things about deadstock is that the weave varies from piece to piece. I developed a camouflage pattern based on the Objects logo. Usually when I make drawings, preparatory drawings for sculpture, I take notes. So I’m going to make a drawing of a work that I want to create. And I have notes that are written around the object that’s inside some sort of thought bubble, which has this irregular shape. The Objects logo comes from there. So I developed a vaguely camouflage pattern which is used extensively in the second chapter. And then there’s really, I would say, iconic shaped jackets and things like that that are coming out early next year as well.

Do you plan to expand beyond fashion with Objects?

I could see there were smaller household items and things like that. But who knows where he can go? It’s just another area to play in.

You can find CH.001 at the retailers below: