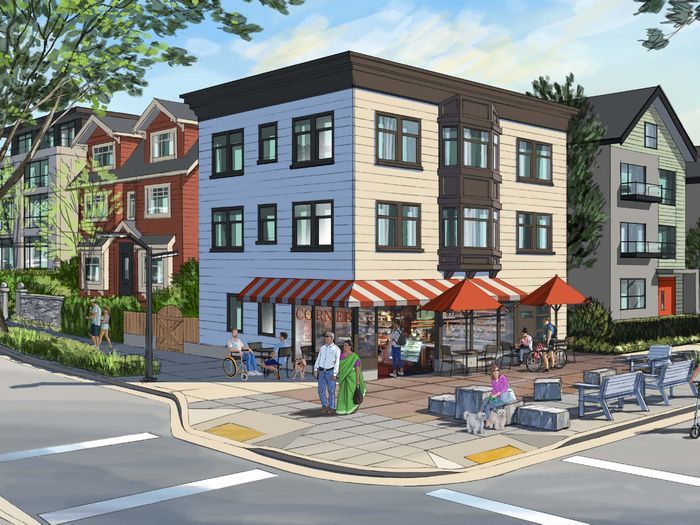 Vancouver’s new citywide plan represents a significant departure from decades of past planning practices that are “just not good enough” to meet today’s challenges, the principal said Wednesday. city ​​planner to the council.

Theresa O’Donnell, Chief Planning Officer, made the statement in a somewhat tense exchange, answering questions from TEAM Coun. Colleen Hardwick, who is a candidate for mayor and is the council’s most vocal critic of the planning department’s approach to density and development.

The plan, whose goal is to guide Vancouver’s next 30 years of growth and change in a more equitable and sustainable way, envisions taller towers near transit hubs and multiplexes, row and commercial spaces in the side streets of the city’s low-density residential neighborhoods. The goal, staff said, is to eventually produce a comprehensive, citywide land use plan that would replace Vancouver’s patchwork of existing neighborhood plans, some of which date back decades.

Hardwick asked how city staff “would respond to criticism that generations of Vancouverites have devoted literally thousands of volunteer hours to creating a veritable tapestry of community plans across the city that are barely mentioned in the body of this report?”

O’Donnell said she did not want to downplay the importance of these plans, which “were created with considerable time and effort” from residents and businesses and “laid the foundation for the world-famous livability of Vancouver”.

“But it’s important to note that the planning approach of the past is simply not enough to address the challenges Vancouver faces today,” she said. “This council and the next council will be called upon to address these issues now.”

Hardwick referenced criticism of Vancouver’s plan aired publicly in recent weeks by city planners who worked for the city in the 1970s, 80s, 90s and 2000s. She asked O’Donnell if she would tell prominent alumni Vancouver planners such as Ray Spaxman, Larry Beasley, Ralph Segal and Scot Hein that “the planning process of the past is no longer relevant to our planning today? »

O’Donnell replied, “I would argue that past practices have not adequately addressed the housing affordability crisis or the climate crisis. Yes.”

The exchange captured some of the tension in the discussion over the Vancouver plan.

Some people, including many planners, don’t like to break with the traditions established by decades of famous planners credited with Vancouver’s worldwide reputation for livability. Others, including other planners, may applaud O’Donnell’s statement and argue that a new approach is exactly what is needed to address challenges that did not exist decades ago.

More than 80 members of the public have registered to address council on Vancouver’s plan – many saying the plan goes too far, too fast, but others criticizing it for not going far enough or fast enough – and the council was hearing speakers again on Wednesday evening.

The broad plan considers ecosystems and watersheds, arts and culture, economy, industry and child care. But a major theme of the plan – and the piece that has caught the most public attention – is changing land use, particularly around housing.

O’Donnell said transforming low-density residential neighborhoods, made up mostly of single-family homes, will be essential. They contain only 15% of Vancouver’s housing, but make up more than half of the city’s land mass. Some of the plan’s fiercest critics also focused on that in their remarks on Wednesday.

Unlike the controversial Broadway plan, which council approved last month, the citywide plan would not result in any immediate changes. The 230-page document submitted to council establishes “a framework” and asks council to send staff to more detailed planning work.

That would come up to the next council for a decision sometime after the October election, and could eventually lead to a formal citywide land use plan, which the city currently does not have.

This is Vancouver’s first attempt to develop a citywide plan since the 1990s, when the city launched a process called CityPlan. After years of public consultation and staff work, council approved CityPlan’s “Directions for Vancouver” in 1995, which has been described as “a broad vision for the city.”

CityPlan laid the groundwork for limited city-wide changes — like legalizing secondary suites — but after years of work, it never led to the kind of comprehensive land-use strategy envisioned by the map of Vancouver.

With few exceptions, most of Vancouver’s low-density residential neighborhoods look much the same as they did before the CityPlan vision was adopted in 1995. Many of these neighborhoods now have fewer people and fewer children – and, of course, houses are several times more expensive.

Gil Kelley, Vancouver’s planning manager when council asked staff to complete the citywide plan in 2018 until he left the city in 2021, oversaw the early years of the plan. He watched Wednesday’s proceedings from his home in Oregon, eager to see what happened to his “baby”.

Reached by phone Wednesday, Kelley said that from the early days of the planning work, the hope was to break with the past.

“I have a different view of neighborhoods in the 21st century than in the 20th century, and a sense of urgency around climate, inclusion and equity,” Kelley said.

He added that in some ways, these “European-style” medium-density neighborhoods with townhouses, low-rise apartments and commercial spaces on side streets, are a throwback to cities planned before the widespread car ownership.

“In a way, the new way is the old… It doesn’t mean that we ban cars, but it depends on the post-car.”