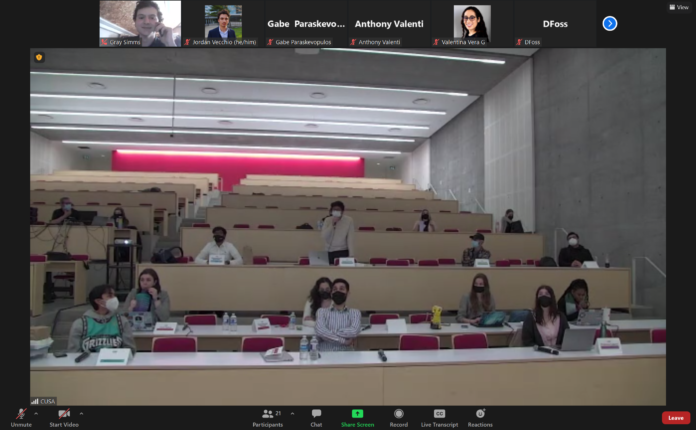 President-elect Anastasia Lettieri stepped down from the Board of Governors (BoG) after the Carleton University Students’ Association (CUSA) passed a motion restricting CUSA executives from holding overlapping roles in other student leader positions on April 4.

Council covered two meetings back-to-back, the continuation of their March council meeting and the first part of their annual general meeting (AGM).

Many councilors participated via Zoom, but the full executive team and a handful of councilors attended in-person for the first time since 2020. The meeting was held in the Health Sciences building at Carleton and was live-streamed on Facebook.

During the continuation of the March council meeting, Sami Islam, president of the Rideau River Residence Association (RRRA), proposed a motion to amend the executive terms of reference so that CUSA executives are barred from holding other student leadership positions that would present a conflict of interest.

The motion came after Lettieri was incoming elected CUSA president since she was also elected to serve another year on the BoG.

Islam started the debate of the motion by arguing that a CUSA executive holding concurrent positions presents a conflict of interest that would limit them from accurately fulfilling both positions.

Islam said an executive who also serves on the BoG is “an extra confusing case,” especially when advocating for lower tuitions and fees.

“The university’s [or the BoG’s] goal is, essentially, to make money and that can come at the cost of students and our tuition hikes, our fees and everything else,” Islam said. “CUSA, as an organization, is generally supposed to advocate for the reduction of these types of things and there is always a conflict between those interests.”

Islam said he would have proposed this motion regardless of who was in Lettieri’s position. Earlier this year, RRRA introduced a similar policy which bars RRRA executives from taking another executive position on other student governments.

Public affairs councilor Gray Simms said he agreed with the motion in part but did not see a potential overlap between the responsibilities of a CUSA executive and a student governor.

Vice-president (community engagement) Callie Ogden responded to Simms by providing examples of conflicts of interest, including how CUSA’s master lease agreement with the university will be renegotiated next year.

In response, Simms said he agreed with the motion after Ogden’s statements.

Afterwards, science councilor Greg Dance asked councilors “who were either in a Discord or participating on the campaign team of someone who this motion might directly affect” to abstain from the vote on the motion.

Interim president and vice-president (internal) Ahmad Hashimi argued that overlapping positions would be too much work for one person.

He also reminded councilors that they voted on the president position being a full time position.

“I have no doubt that Anastasia, the democratically elected president, can execute both of her roles as effectively as any,” Black said.

Arts and social sciences councilor Katelyn Madigan, who seconded Islam’s motion, responded by saying “this was never about the president-elect herself, but about the students.” These comments were met with applause from the in-person attendees.

Public affairs councilor Jordan Vecchio proposed an amendment to the motion that would delay its implementation until the 2023-24 academic year. He said it was unfair to introduce this amendment after the election.

Chief electoral officer Nicolas Gil Ocampo told council that he talked with Lettieri before the election about the risk of council presenting this motion.

Lettieri, who did not participate in the debate but spoke briefly before the vote, said she would be willing to step down from one of her positions if that is what council decided.

Council unanimously voted against Vecchio’s amendment, and then unanimously passed the amendment to the executive terms of reference.

After the meeting, Lettieri confirmed with the Charlatan that she resigned from the BoG.

Before debating the amendments to the executive terms of reference, council also passed 13 policy updates. The policies, which were all proposed by vice-president (student issues) Valentina Vera Gonzalez or the constitution and policy review committee (CPRC), fill gaps within the new bylaws and update previous policies.

The CPRC proposed new rules of order to add more clarity to the structure of future CUSA meetings. Among other changes, the new policy adds a space in the agenda to address conflicts of interest, proposes new motions and includes staff and council chair reports.

Council also updated their social media policy which was presented to council by the CPRC.

Simms, who is chair of the CPRC, said that the new social media policy was made to ensure that the association or any members associated with it do not post anything “unacceptable” on social media.

Engineering and design councilor Saad Khan asked why Instagram was not mentioned explicitly in the policy when it outlines regulations for Twitter and Facebook. Simms said the committee “didn’t find it necessary to add regulations for other platforms,” since the policy includes regulations that apply to posts on any social media platform.

Vice President (Finance) Venassa Baptiste asked if the policy would apply to CUSA members’ personal or private social media accounts, including “finstas” or private stories. Simms said the policy only applies to representatives “acting on behalf of the association online.”

During the CUSA AGM, council discussed the presidential and councilor election results before voting to ratify the results.

“A great deal of my constituents were dissatisfied with the way that the no-confidence element of that vote was handled specifically with regards to the presidential election,” science councilor Cameron Davis said.

He added that “moving forward there needs to be clarifications made and possibly even a change to the system when this voting item wins the first round.”

Ogden said no confidence votes must reach more than 50 per cent to trigger a re-election and that if councilors or students disagree, they could look into changing that regulation in time for the next election.

This policy regarding a no confidence majority is not detailed in the electoral code, nor in CUSA’s current policies and bylaws. The official elections results included an explanation of ranked ballots that said if no confidence received less than 50% of the vote, it is removed from the totals after the first round.

1. After the first round, if no candidate has greater than 50% of the votes, and no confidence has less than 50% of the vote, no confidence will be removed from the totals after the first round (as ‘No Confidence’ cannot gain votes as it is only valid as a first choice option). As a result, the number of votes for a candidate in round 1 and 2 is the same, only the valid % of votes changes as ‘No Confidence’ is not a valid choice in the second round.

2. After the second round, the candidate with the fewest votes in the last round will be eliminated and their results will be distributed according to the voter’s preferences until one candidate has greater than 50% of the total valid votes.

Although a few councilors abstained because of their participation in the election and Dance, Hashimi and Islam voted against the motion to ratify the results, the motion was still passed by council.

The second part of the AGM will be held in person on April 13 at 1 pm Council will listen to vice-president debates, elect vice-presidents and dissolve the 2021-22 CUSA council.