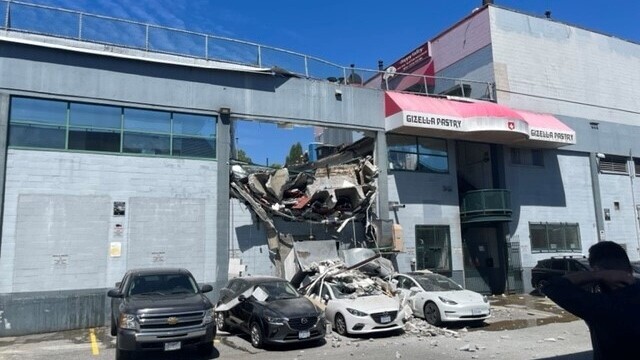 Always looking for the collapse

Eight people have been rescued from an office space under a collapsed rooftop parking lot in east Vancouver, but firefighters say it’s still too early to tell if everyone has been found.

Vancouver Fire Assistant Chief Dan Moberg says the eight were in a room next to the collapsed area and crews used a ladder truck to reach a second story window and evacuate the trapped people.

Two of the victims were treated in hospital but their condition has not been updated.

Firefighters said a small bobcat loader was working on the roof and drilling was underway on a section of the parking lot when the collapse happened around 1 p.m. Thursday.

The loader and a piece of sidewalk approximately three by four meters fell from the parking lot into the offices below.

The area, which includes a main street next to the damaged building, remained closed early Friday.

WorkSafeBC, the agency that oversees worker safety in the province, says it has already opened an investigation into the cause of the collapse.