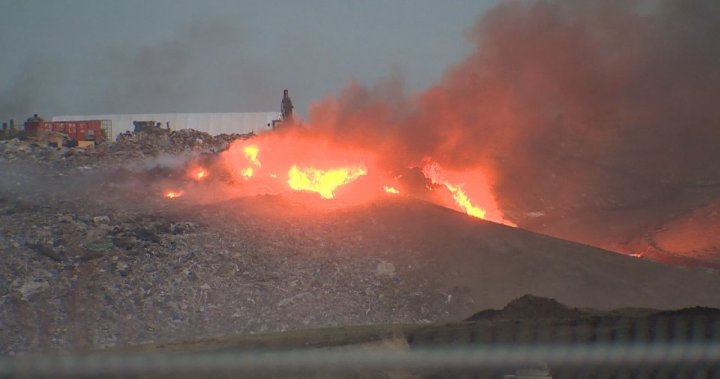 Calgary fire crews told Global News just before noon Saturday that a “stubborn” fire that had burned overnight at the ECCO Recycling plant was now under control.

Fire crews were called just after 8 p.m. Friday to the southeast community of Quarry Park and battled the blaze through Saturday.

“The fire quickly grew in size and volume, and fire crews were forced to respond with remote water supply and water jets,” according to a press release from the service. Calgary fire. “The water supply was a challenge for the crews as the nearest fire hydrant was nearly a kilometer from the blaze.”

Environment Canada issued a special air quality statement for the city of Calgary shortly after 8 a.m.

“Smoke from a fire in Quarry Park in southeast Calgary is producing high levels of air pollutants in the area,” according to Environment Canada.

“Individuals may experience symptoms such as increased cough, throat irritation, headache or shortness of breath. Children, the elderly and people with cardiovascular or pulmonary diseases, such as asthma, are particularly at risk.

According to the Calgary Fire Department, “the contents of the landfill are noted as construction waste and dry fill.”

There was also an incredibly close call for one of the dump workers.

“A large bulldozer used by landfill personnel to put out the fire suffered a mechanical failure and then was quickly brought under control by the fire,” according to the Calgary Fire Department. “The operator was able to exit the machine unharmed and retreated to safety.”

Calgary police, CP Rail (which has a site bordering the plant) and Alberta Environment also attended to assist.

Firefighters are expected to remain on site for much of the day.

The cause of the fire is still under investigation, but no injuries have been reported.