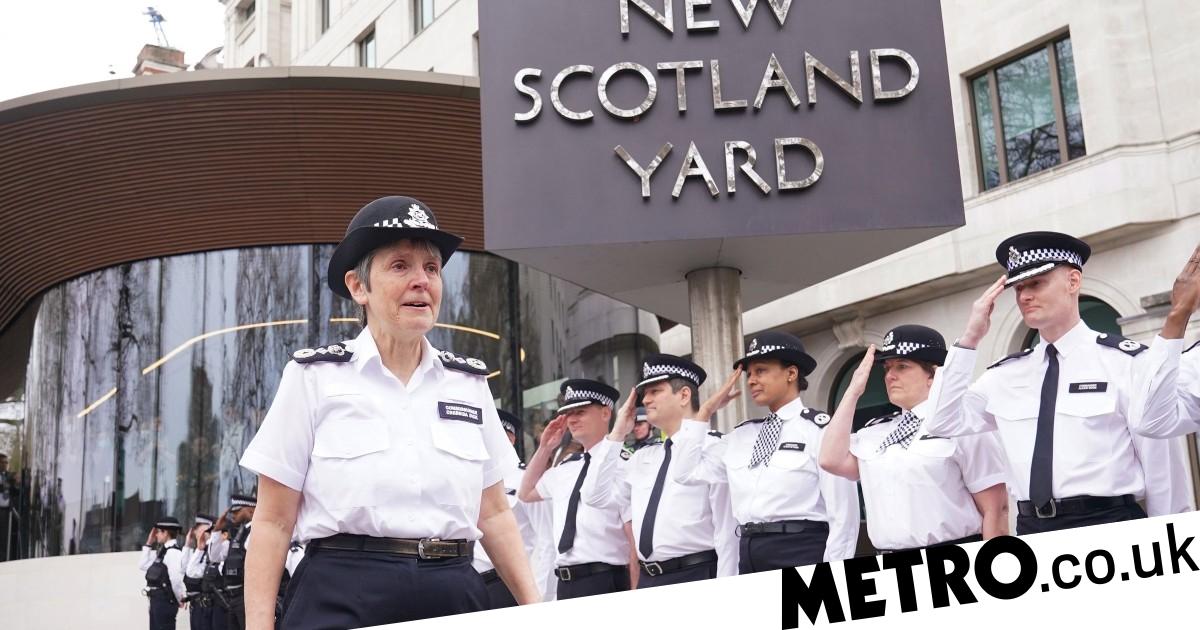 Dame Cressida Dick has warned against the ‘politicization of policing’ in a thinly-veiled swipe at the London Mayor before leaving her post as Met Commissioner.

The senior officer was forced to quit after clashing with Sadiq Khan over his handling of racist, misogynist and homophobic messages shared by a group of officers based at Charing Cross police station.

It was among a series of controversies that plagued the Met during her time in office – causing the mayor to declare he had ‘lost confidence’ in her plans to reform the force.

Dame Cressida said those scandals, including the murder of Sarah Everard by serving officer Wayne Couzens, caused her to look back ‘with humility’ when Londoners were ‘let down’.

Making some final remarks before the end of her tenure, she said she will reflect on what more she and others could have potentially done during her time in the role.

And she described police operational independence from government as ‘crucial’ in what may be seen as a swipe at political leaders in the wake of her downfall.

Dame Cressida warned: ‘The current politicization of policing is a threat not just to policing but to trust in the whole criminal justice system.

To view this video please enable JavaScript, and consider upgrading to a web browser that supports HTML5 video

‘Operational independence from local and central government is crucial for an effective democracy and is a model respected around the world. We must all treasure and protect it.’

Dame Cressida’s resignation was met with dismay by staff and came just hours after she said in an interview that she had no intention of quitting.

On Friday, the smiling senior officer was cheered and applauded by a large crowd of colleagues bidding her an emotional farewell outside Scotland Yard, ahead of her last day on the job this weekend.

During an earlier visit to the Metropolitan Police Specialist Training Center in Gravesend, Kent, she reiterated that the mayor ’caused me to say that I would step aside’ and that she did not ‘voluntarily resign’ – the circumstances of which are being reviewed by outgoing chief inspector of constabulary, Sir Thomas Winsor.

She insisted the culture in the force ‘has been changing’, telling reporters: ‘I believe during my commissionership you have seen a real opening up of the Met.’

Meanwhile, Mr Khan said he was not ‘going to hide from the fact’ that he lost confidence in her.

Speaking at the launch of Labour’s local election campaign in Barnet, north London, he said: ‘In the recent past, she’s worked with many others to help us reduce violent crime but I’m not going to hide from the fact that I lost confidence in her.

‘I’m not going to hide from the fact that we’ve had in our city a series of devastating scandals, overt racism, sexism, discrimination, homophobia, we’ve had trust and confidence from Londoners in the police service at rock bottom .

‘It’s one of the reasons why I lost confidence in her and it’s one of the things I’ll be looking for in a new commissioner, how they will address some of these serious issues that, frankly speaking, the current commissioner failed to address. ‘

Dame Cressida was met with cheers of ‘hip, hip, hooray’ and saluted by a guard of honor as she waved and thanked those who had gathered for her send-off.

In a ‘letter to London’, She wrote: ‘Of course as I look back there is more I wish we had achieved.

‘We hear the criticism, know not everyone has confidence in us to provide a good service when they need us, and have seen among us those whose horrific actions have let you all, and us, down so terribly.

‘Each one drives us to get better, to root out those who don’t uphold our standards and don’t deserve to wear our uniform… We are listening and acting on what you tell us so we can change for the better.’

I have been privileged to lead the Metropolitan Police Service for the last five years. I will always look back on my time as Commissioner with pride for what has been achieved, with humility for when Londoners have been let down, and with huge confidence the changes we have been making will ensure you can be proud of the Met going forward. I leave with the fondest of memories of the fantastic people I’ve been lucky enough to work with.

When I first took this role I set out my priorities. I knew we had to focus on what matters most to Londoners, particularly tackling violence which has been far too prevalent – ​​often having the worst impact on the most vulnerable.

We had to work more closely with others so we could collectively keep people safer and bring more offenders to justice.

Five years on, despite new and unexpected demands, grave tragedies and the toll of the pandemic I know we have made significant strides.

The Met is nearly 200 years old and remains a world class police service. Our original principles of policing by consent, operational and impartiality are still utterly independence fundamental.

Violence is down, our partnerships are strong and we are on course to achieve a step change in the number of crimes we solve. We have thousands more volunteers working with us, better ways of communicating with the public and higher levels of involvement by and engagement with our citizens in their police service.

Murders, shootings and stabbings are all down. These figures are not an accident. They are not repeated in other major UK cities. They are down because we, working with our partners and communities, drove them down and have brought ever more serious offenders to justice. I am confident the reductions will be sustained: violent and predatory people, drug dealers and those involved in county lines gangs and organized crime will find it much tougher to operate.

We have also learned lessons from the terrible terrorism we saw in 2017. In the last five years, counter terrorism policing and UK intelligence services have stopped 29 attacks.

We’ve innovated with our Counter Terrorism Operations Centre, a central London hub that brings together CT Policing’s core capabilities and our partners – both in London and at a national level – under one roof. We have invested in better modern technologies to make us more effective and able to do more for less cost.

But these successes, and so many others, are possible because of the brilliant, compassionate and courageous people of the Met, undertaking extraordinary work and caring deeply about the people, places, communities and victims they come to work to protect and serve.

We will soon grow to a record size with thousands more officers – and we’ve just surpassed our highest number ever with over 34,000 officers as of last month. These are additional officers that you’ll see in your neighborhoods and keeping your town centers safe.

The Met is far more diverse and inclusive than it has ever been. It is a wonderful place to work and we need women and men of all backgrounds to join us and continue to make a difference.

Of course as I look back there is more I wish we had achieved.

We hear the criticism, know not everyone has confidence in us to provide a good service when they need us, and have seen among us those whose horrific actions have let you all, and us, down so terribly.

Each one drives us to get better, to root out those who don’t uphold our standards and don’t deserve to wear our uniform. To improve our response so all our communities feel protected by us.

We are listening and acting on what you tell us so we can change for the better. Just this week we launched our violence against women and girls plan, shaped by the views of hundreds of Londoners.

The current politicization of policing is a threat not just to policing but to trust in the whole criminal justice system. Operational independence from local and central government is crucial for an effective democracy and is a model respected around the world. We must all treasure and protect it.

Now more than ever the mission of the Met is to keep this amazing, global, diverse capital city safe for everyone, to get back to basics, to improve, to innovate and make sure we bring offenders to justice.

On a personal level I’m sad my time in this great job is fast drawing to a close, however, I am extremely optimistic for the Met’s future. It is bigger, more diverse, more capable than ever.

My message to London is this: London is a safe city in so many ways. You have a fantastic police service. We all need the Met to be successful in keeping London safe and for the public to have confidence in our service. The 44,000 women and men of the Met care passionately about getting it right and always want to be here for you.

Two questions are under way looking at the culture within the Met in the wake of the murder of Sarah Everard by then-serving police officer Wayne Couzens, the jailing of two officers who took pictures of the bodies of murdered sisters Bibaa Henry and Nicole Smallman, criticism of how the force handled the partygate scandal and the Daniel Morgan report which blasted the Met’s failure to tackle corruption.

Dame Cressida leaves as more than 34,000 officers are employed at the Met, the highest in history according to the force which is almost 200 years old.

She reviewed 157 police constables and 25 detective constables as she led her last ever passing out at Hendon in north-west London.

Dame Cressida said she would ‘always look back on my time as commissioner with pride for what has been achieved, with humility for when Londoners have been let down, and with huge confidence the changes we have been making will ensure you can be proud of the Put going forward’.

Her last day in post will be on Sunday, after which she will take unused annual leave, with her final day of employment being April 24.

This could take around five months, Mr Khan said, adding that the best candidate would be ‘somebody who understands the challenges we face and also recognizes the uniqueness of London’.

Get in touch with our news team by emailing us at webnews@metro.co.uk.

For more stories like this, check our news page.

Get your need-to-know latest news, feel-good stories, analysis and more