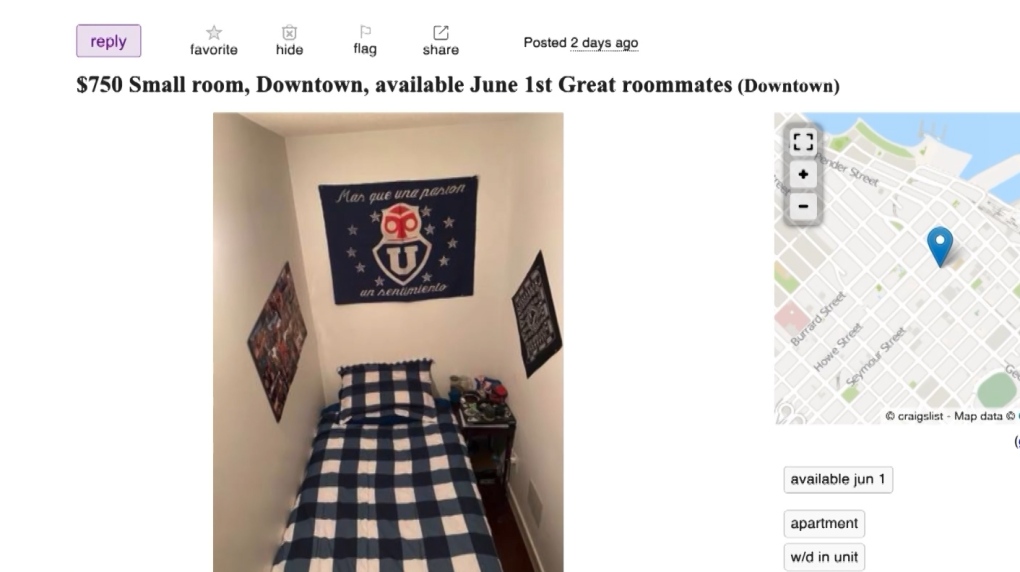 It fits a double mattress and a nightstand, and it will cost almost $800 to rent.

A Craigslist ad posted this week says a “small room” in a condo is available June 1 in downtown Vancouver.

“The den is a little small but the apartment is big,” the ad read.

The windowless den is used as a bedroom and seems to serve its purpose, as it can only fit a single mattress in the cramped space.

The rest of the condo is shared with two roommates. It costs $750 per month, not including internet and utilities.

The skyscraper sits above the Granville skytrain station and boasts of its location and amenities.

The ad highlights the compromise some tenants are willing to make in a rental market with high prices and limited supply.

“You’re trading privacy and space for money,” said Tom Davidoff, associate professor at UBC’s Sauder School of Business. “It’s a great place in a place where there aren’t enough houses. It’s an indicator that high prices are forcing people to make sacrifices – and no windows, and probably not good ventilation, and lousy privacy is a sacrifice people have to make.”

Erika Ohashi, an international student from Japan, said she had responded to more than 70 advertisements and would soon be moving into a similarly sized room for $1,100 a month.

“It’s enough for me because it’s big enough to sleep in and stay safe, so that’s good,” she said, giving a thumbs up.

Tenant advocates said there was a desperate need for affordable housing.

“We need to look at public investment in public and social housing, investment in stimulating other types of non-market housing like co-op housing, things that ensure we don’t just get more units on market, but really affordable units available,” said Robert Patterson, attorney at Tenants Resource and Advisory Centre.

Until that happens, the cost of renting will likely continue to rise, Davidoff said.

“Mortgage payments have gotten more expensive, so payments on a house are going to get worse. And I guess unless something drastically changes in the economy and in general migration patterns, I think the rental market will get worse here too,” he said.

CTV News contacted the person who posted the Craigslist ad for an interview, but did not hear back by the deadline.