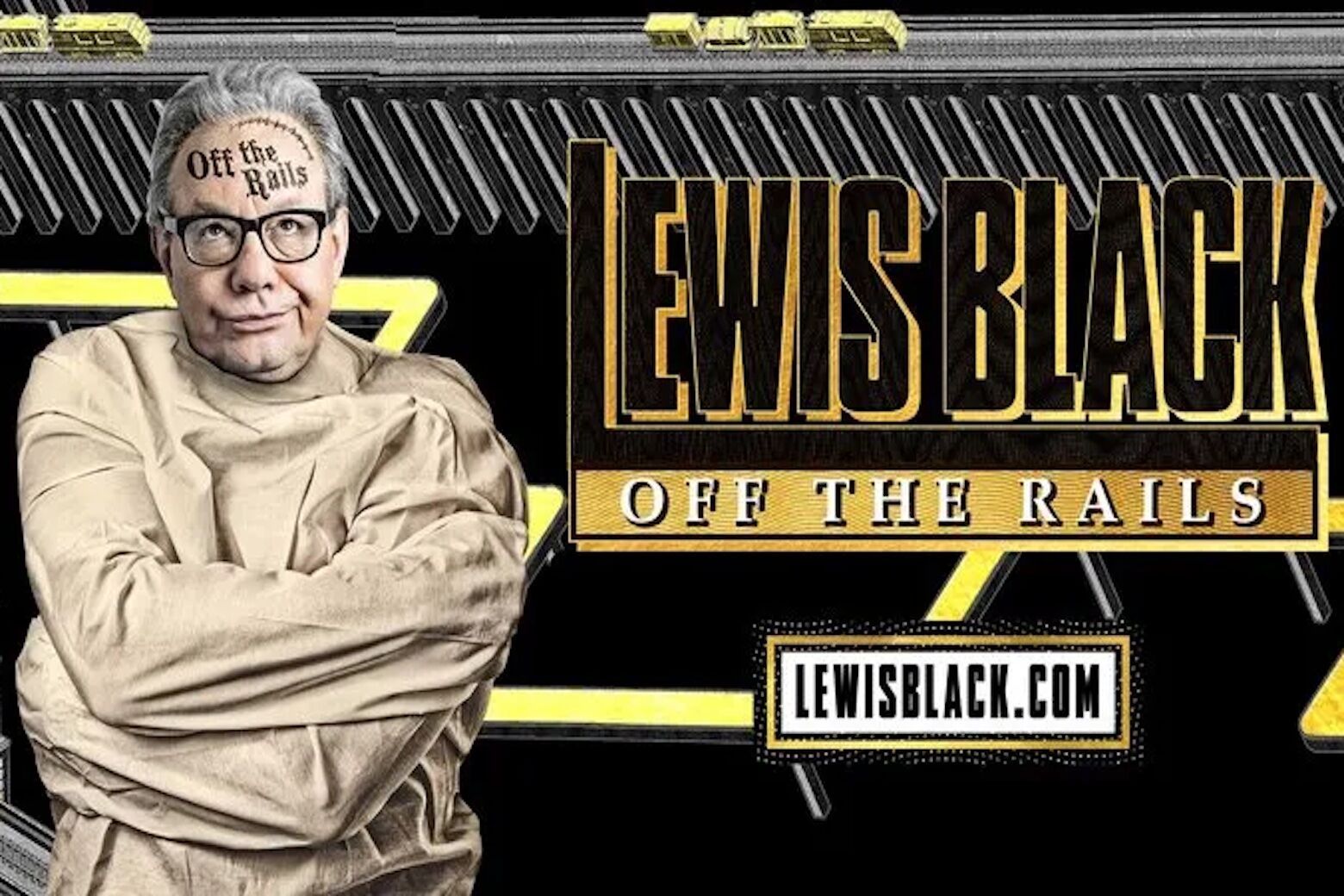 His comedic rants are perfectly suited to help us blow off some steam over the past few years. Lewis Black explodes in hilarious anger at the Warner Theater on Friday and Saturday.

Listen to our full conversation on my “Beyond the Fame” podcast.

His comedic rants are perfectly suited to help us blow off some steam over the past few years.

Lewis Black explodes in hilarious anger at the Warner Theater on Friday and Saturday.

“I was in solitary confinement for almost 12 weeks and it was really expensive,” Black told OMCP. “I’ve lost my mind. As I tell the public, ‘You’ve only been with me 20 minutes, imagine what it’s like to be with me for literally 12 weeks?’ …I was pointing at myself while shouting Your brain can only be entertained as long as it comes after you.

The tour is aptly called “Off the Rails”, which describes the state of our nation.

“We’re completely off the tracks, we’re not even on the tracks, the train went off the rails, now we’re rolling on the grass and the wheels are spinning,” Black said. “I mean who goes through a pandemic and at the end of the pandemic, that’s crazier than it was in the middle of the pandemic? We fight for completely ridiculous things.

He remains furious with the US Capitol insurrection on January 6, 2021.

“People say it didn’t happen! Calling it regular tourists coming to see the place!” says Black. “We had a two-party system which initially dealt with different views on the same reality. … We now live in two separate realities. We argue about what is reality. You can not do this. I did this on an LSD trip and you learn a great lesson.

Born in DC in 1948, Black grew up in Silver Spring, Maryland.

“I was born and raised around Washington,” Black said. “One of the reasons I left is that local news is national news. I would have been in front of Congress everyday barking on all fours at these people and probably nipping at their heels. I just couldn’t bear to watch so closely what was going on there on a daily basis. I beat them to the fist.

After a year at the University of Maryland at College Park, he decided he could no longer live with his parents. So he transferred to the University of North Carolina at Chapel Hill to study playwriting, followed by an MFA at Yale University School of Drama in 1977.

“The plan was to be a playwright,” Black said. “I wrote a lot of plays. … [Anton] Chekhov whom I loved, [Samuel] Beckett whom I loved, [Harold] Pinter whom I loved, Sam Shepard whom I loved. … One of my early favorites was John Osborne’s aptly titled ‘Look Back in Anger’… and Herb Gardner’s ‘A Thousand Clowns’, which has long been a model for me.

He started getting into stand-up at the West Bank Cafe in New York.

“Downstairs was a 100-seat bar, a theater and a little little stage,” Black said. “I would open for every show. I did stand-up once in a while, but I did it for fun. It cracks me up to do that. It was a way for me to write stuff and get it going without having to write a play. … He just took off. People liked the stand-up more than they liked the plays.

Eventually, he transitioned into acting full-time around the age of 40.

“I had this game that I thought was the only one to break through, but it was a miserable experience I had in Houston,” Black said. “I ended up working at a comedy club in Houston and they offered me a gig for the same amount of money I made as a playwright. I would work there for a week instead of spending two years at write a play.

Viewers got to know him from the “Back in Black” segments on “The Daily Show.”

“The explosion of cable TV was when they found out, ‘Oh, politics is funny! Social satire is funny,” Black said. “The reason we became who we turn to is… the fact that the news was becoming satirical. Someone would come along, they would say something, then deny they said it, then we would show them a tape of them saying it, joke’s over, let’s move on.

He continues to appear on “The Daily Show” even after Jon Stewart’s departure.

“I do them until they realize I’m still here and they’re like, ‘Wait a minute? ‘” Black said. “I’ve been doing it for 25 years. I started with [Craig] Kilborn and I always do it with Trevor [Noah]. I enjoyed working with each of them. They bring me when they want me. … They never auditioned me to be in that chair. …Just do it out of courtesy.

Next up is the Warner Theater, where he will perfect his next special.

“The Warner is kind of the final tune, so people are going to see it,” Black said. “I’m really glad I did the final tune there, because the ‘Red, White & Screwed’ special was awesome that we shot there. I loved the Warner, I loved working on that scene and I think that might have been my best special, so going back there to work on that is awesome.

Stick around after the routine for his bonus live stream “The Rant is Due.”

“After I finish my show, I come back on stage,” Black said. “Go to LewisBlack.com, you can basically hear some of the Rant Cast. I’m asking for the audience to write in, they can ask a question, but I’m really looking for their comments on life in DC…I’m going to pick the ones that are out of that area and it’ll be a live stream that goes around the world.”

This summer, he’ll even return to playwriting at the Bowie Community Theater in Maryland.

“It’s called ‘One Slight Hitch’ and it’s done there in July,” Black said. “It’s set in the 80s about this woman who has to choose between getting married or having a career. If you didn’t know my name was there, you wouldn’t know I wrote it. It’s a romantic comedy. »

Listen to our full conversation on my “Beyond the Fame” podcast.