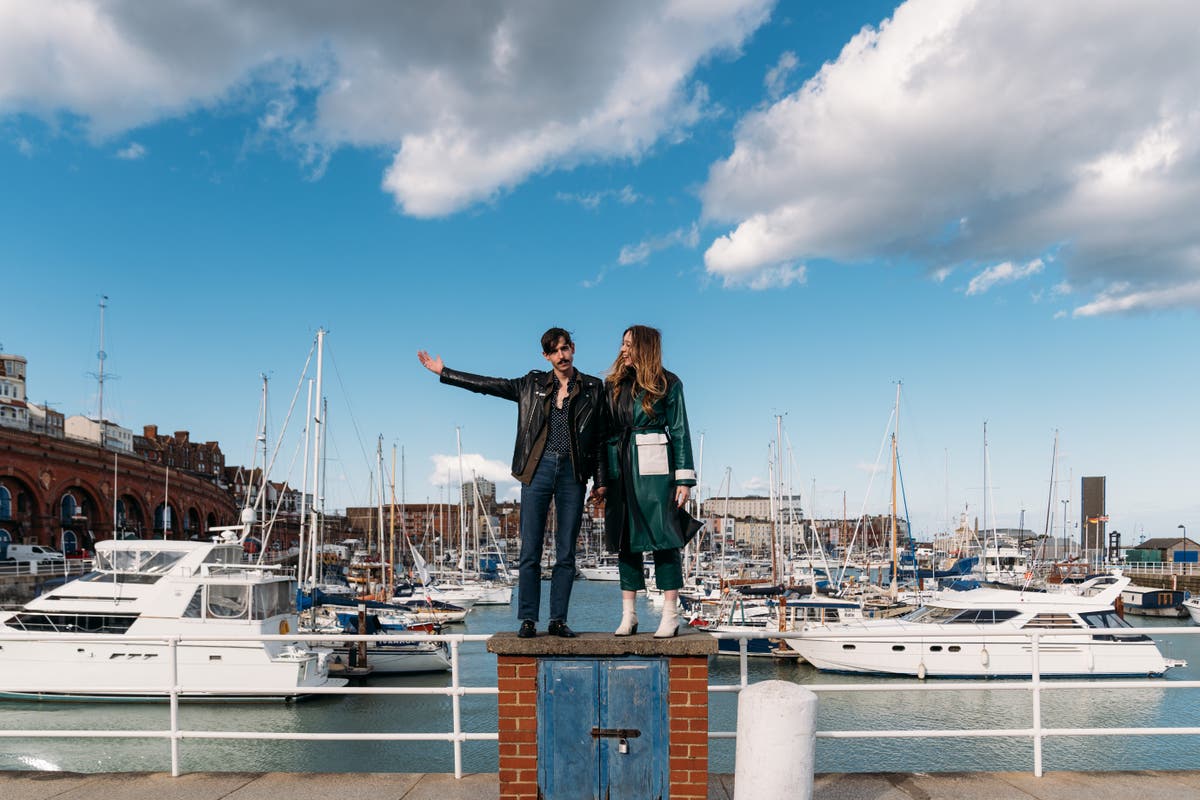 ea, sand (or pebbles) and occasional sun are all on offer within 90 minutes of London. And since the pandemic has given many Londoners the option to work at least some days from home, the stretch of coastline that has long been popular with artists and other creatives has opened up to the office crowd too.

But where should these yuppies with an edge start their search for a home?

If you dream of the taste of salt in the air, early morning walks along the promenade, and the chance to spend your weekends paddleboarding or sailing, but don’t want to give up on the home comforts of London life, there are some amazing options.

These five towns, all within a decent commute of London for the office bound, are where you should be looking for sea with a side order of culture and coffee shops.

How much? You would need to pay approaching £1 million for one of the lovely Regency houses overlooking the sea on The Paragon or Royal Parade, and around £700,000 for a two-bedroom flat.

The switch: Trains to St Pancras International take around an hour and a half.

What’s to love? Not as smug as Broadstairs, this good-looking town is the perfect place to chill out on the beach, pick up vintage finds at its outstanding collection of antique shops (you’ll be hard pressed to visit the Petticoat Lane Emporium without finding something you have to buy), or cycle the Viking Coastal Trail.

Emma Jane Palin, 31, an interiors stylist and blogger, bought in Ramsgate almost a year ago, with her husband Josh, 34, a musician who also works at Forts in Margate. Before that the couple had rented in Margate, having moved to the coast from London.

“We moved to Ramsgate because we could afford to buy here,” she says. “Margate got a lot more expensive in the past few years. Ramsgate’s still quiet and it’s got that community feel.”

Palin recommends a stroll on Addington Street. She loves Potters for interiors shopping, Positive Retail for pre-loved luxury fashion and Vinyl Head for records. For coffee head to Union, a yoga shop and cafe.

How much? Folkestone’s alpha address has long been its West End, with its streets of lovely Georgian, Victorian, and Edwardian houses.

A two-bedroom flat around here will cost about £300,000, says Claire Reene, branch manager of Bairstow Eves, while you could pick up a four-bedroom house for around £600,000.

Reene recommends looking east, around the Harbor Arm, which has become trendier as the area has been regenerated with bars and restaurants. A two-bedroom flat here would cost at least £200,000 while a four-bedroom house would come in at about £400,000.

The switch: Trains to St Pancras International take just under an hour. London Bridge services take an hour and a half.

What’s to love? Catherine Nice moved to Folkestone in 2015, with her husband Gary, and their two children, Jude, 11, and Ruby, eight.

Nice, 41, is a print designer with her own homewares brand, Kitty McCall, and she and Gary, 44, who is in the process of setting up a bespoke recruitment agency, had lived all around south and south-east London, most recently in West Dulwich.

In 2014, Nice felt a need to be close to her parents, so the family moved to Leighton Buzzard. She liked the town well enough, but it didn’t really click.

Then her parents announced they were going to move down to Folkestone. “We came down to have a look and I was blown away with the sea, and the feeling of community, and what they were trying to do with the regeneration,” she said.

A year later the family was living by the south coast. “When we first came down there were maybe one or two restaurants. Now you have got The Folkestone Wine Company, which I love, a little tapas place called Pick Up Pintxos, and the Harbor Arm is amazing in summer because it has live music and lots of street food stalls.”

A new creative quarter was established by Roger De Haan, who invested millions in his hometown, which is now full of public art, by the likes of Antony Gormley and Tracey Emin, and hosts the Folkestone Triennial.

Buyers on smaller budgets could consider adjacent Westcliff-on-Sea which is attracting more interest thanks to its value for money — although it is by no means as hip as Leigh. You could pick up three-bed house for around £500,000.

The switch: Trains to Fenchurch Street or Liverpool Street take about an hour.

What’s to love? Georgie Perkins moved to Leigh-on-Sea in 2004, from Hertfordshire.

“You’ve got a really beautiful old town with cobbled streets and pubs with seating out on the sea wall so you can sit and have a drink and watch the estuary and the fishing boats, and then you have got a really vibrant, driving high street, full of bars, shops and vegan restaurants,” she says.

Georgie, 43, runs a local community center while her husband, Lee, 45, is an electrician.

The couple have a six-year-old son, Evan, and a dog, Buddy, and the family loves to hang out on the beach. “It is one of the longest lines of beach in the country, one just leads on to the next, so it is great for walks,” she says.

How much? The posh part of town is Meads, west of the town centre, close to the South Downs and the seafront. Stephen Rodgers, senior branch manager at Fox & Sons estate agents, estimates that you would pay around £280,000 to £300,000 for a two-bedroom flat, or around £500,000 for a three-bedroom terrace.

For more bang for your buck look east towards Redoubt, where you could pick up a two-bedroom flat for £180,000 to £200,000, or a two-bedroom Victorian cottage for £250,000 to £280,000. “Investment is coming in from the London and Brighton market and you can get some really nice, traditional brick or flint built houses,” says Rodgers.

The switch: Trains to Victoria take around 90 minutes.

The jewel in Eastbourne’s crown is Towner, a gallery designed by American architect Rick Mather. It holds a fantastic collection of contemporary art, has its own cinema, and stages inspiring exhibitions and workshops.

How much? Rambling detached houses in peaceful East Mersea come with big gardens and £1 million-plus price tags. You could pick up a new, detached three-bedroom estate house for around £525,000 to £600,000 or you might find one of the island’s weatherboarded cottages for £450,000.

There aren’t many flats on the island but there are a few small purpose-built blocks, priced at circa £250,000 for two bedrooms.

The switch: You need to go to Colchester, by car or bus, the trains to Liverpool Street are just under an hour.

What’s to love? You’d never believe you are only 10 miles from Colchester. But the second you step across the ancient causeway that separates island from mainland you will feel like you are on a different planet. Island life is quiet — all long walks, sailing, and messing about on the beach — but that doesn’t mean there’s nothing to do.

The Company Shed is a fabulous seafood restaurant, Mersea Barns is the place for a Sunday roast, and there are three pubs.

Now and then the causeway floods during high tide and you are marooned romantically on the island — sadly this splendid isolation only lasts about 90 minutes.

While quiet in winter, Mersea does get very busy during the summer holidays. Since most of the houses were built post-Sixties this isn’t the place to search for a cutesy thatched cottage.

Tips for Londoners moving to the seaside