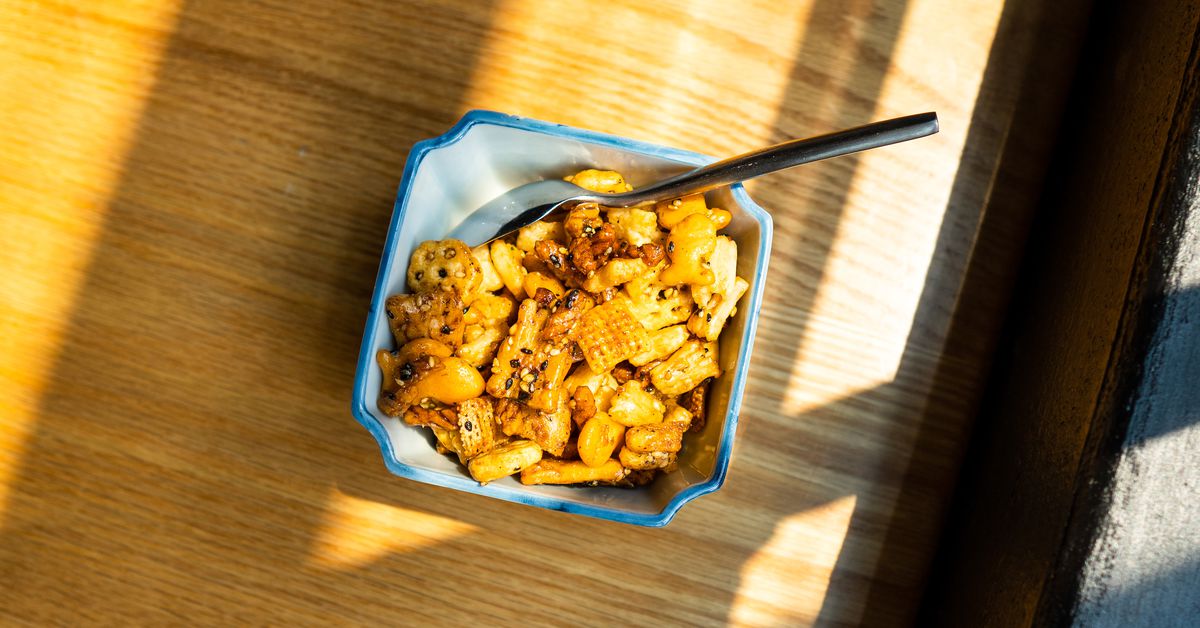 As more drinkers return to bars, establishments are welcoming their return with the release or revival of appropriate party mixes. Whether it’s an upscale hotel lounge or a dive restaurant, the latest dishes to try in town share one common trait: they’re either free or cost around the price of a draft of the dish. happy hour.

This week, José Andrés’ Peruvian-themed China Chilcano launched an off-menu snack as part of its “Pisco Hour” (Monday through Friday, 4-6 p.m.). The complex order ($4), available on request, is made with dried shrimp and scallops, jamón ibérico, shallots, garlic, shaoxing wine, aji panca pepper and a splash of Coke- Cola.

After a successful test at its Capital Food Fight booth this month, ThinkFoodGroup decided to serve up a secret spin-off at its Penn Quarter restaurant.

Another must-have mix exists near Silver Lyan, the underground cocktail bar Ryan Chetiyawardana opened at the Riggs Hotel just before the pandemic shut down the city. Its opener “Chex Mix” — a compilation of Virginia peanuts, seaweed and smoked tea ($8) — never had time to shine alongside the sit-and-stay martini service until recently. .

Some of DC’s most iconic hotel lounges have set the bar for the following snacks in the city. Off The Record, tucked under the historic Hay-Adams, returned last summer through the White House with spinning saucers of wasabi peas, glistening olives conveniently speared with toothpicks and mixed nuts. Collectible coasters adorned with playful and political caricatures are always complementary here too.

At Doyle, the Dupont Circle Hotel’s mid-century lobby bar, its standard nut mix gets a makeover in May. The giveaway will include Bloody Mary flavored cashews, blanched almonds, Cajun peanuts, Hawaiian macadamia nuts, and pistachios.

Daikaya’s new Hatoba Chex furikake mix at Navy Yard is an ode to his childhood favorite sweet and savory dish that his partner Katsuya Fukushima used to eat in Hawaii ($4). He says the “crispy snax” component rotates based on what looks good at Harris Teeter down the street, and the team scours the potato chip aisle for the next ingredient to play in the mix. Banana chips, Honeycomb and Captain Crunch are some incoming ideas, he says.

“We will always use butter, brown sugar and soy sauce as a binder,” says Fukushima.

At Capitol Hill’s glamorous The Wells gin bar, a months-old concoction of corn nuts, almonds and pumpkin seeds is tossed with salt and homemade garlic oil. The treat is roasted in the oven at 300 degrees for about eight minutes. While still hot, the mixture is hit with urfa pepper, hot smoked paprika and black pepper. Chunks of crumbled parmesan-pecorino cheese crisps complete the sizable app that fills an entire plate ($5).

A bar mix in its simplest form has become synonymous with one of DC’s most recognizable restaurant clusters. A ‘bottomless’ dish from Pepperidge Farm Goldfish is a long-running opening at Hank’s Oyster Bar’s three outposts as a tribute to owner Jaime Leeds’ late father, Hank. “It was his favorite snack,” says manager Nate Oser.

The orange snack service returned in January after a year-long pandemic hiatus for take-out and dine-in orders.

“We are looking into a case [of Goldfish] a week at each location,” he says.

At the Wharf’s no-frills waterfront Cantina Bambina, six-ounce bags of “Chef Rob’s Spicy Nut Mix” remain a cult classic ($8). Her chef, who has been on board since her early days at Cantina Marina in the southwest, prepares most of her packaged snacks at the nearby Pearl Street Warehouse.

Some kitchenless cocktail bars don’t take their snacks too seriously by design. At the Truxton Inn in Bloomingdale’s, a bag of popcorn with kosher salt ($3) can be flavored with real movie butter flavoring for an extra 25 cents. Beans purchased in bulk ($4) come with a menu disclaimer in its Trusted List of Old Fashioneds: “I wouldn’t recommend these for a full dinner, but a nice hearty appetizer, of course.”